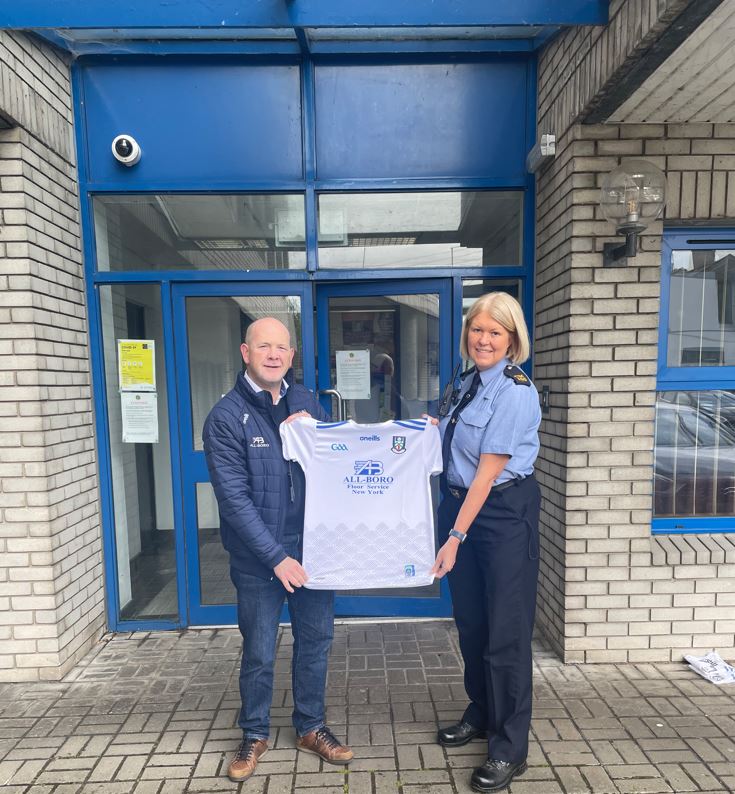 Monaghan GAA were delighted to present a Monaghan GAA Jersey to the Cavan/Monaghan Gardai Division for the Little Blue Heroes Foundation.  Pictured in photo Monaghan GAA Secretary Michael Carroll and Gardaí is Margaret Oliphant.
LITTLE BLUE HEROS
The Cavan/Monaghan Garda Division currently have 7 Little Blue Heroes that have come on board in the last 12 months since we became active. 2 in Cavan District, 2 in Carrickmacross District and 3 in the Monaghan District. 4 of these children have life limiting conditions. We have provided financial aid to another local family whose child has sadly since passed away and we further helped again financially with the funeral costs. We currently have 267 Honorary Gardai registered, and we’ve helped a further 427 families. We are growing weekly with new financial aid forms being received from families country wide and separate
applications for children to become Honorary Gardai.  Little Blue Heroes Foundation is a not-for-profit charity operated entirely by volunteers (no paid staff) made up of Garda members/staff, retired Garda members, their families, friends and civic minded people from communities. It aims to help families
in need from local communities in Ireland who have children undergoing long-term medical treatment for serious illness. The name ‘Little Blue Heroes’ came about when they found that the vast amount of the children they support have a strong fascination with police uniform, equipment, vehicles, Garda units, etc.. This has even led some of the children to make a wish to become an Honorary Garda and become part of the Garda family. As heroes to us with the battles they face, these children have become our Little Blue Heroes.
Little Blue Heroes Foundation’s mission is to provide practical and financial support to families of children who have serious illnesses in Ireland while granting the wish of the children it supports to become Honorary Gardaí to empower the child and foster positive engagement with An Garda Síochána.
The charity provides:
1. Essential Financial support to families of serious & terminally ill children. €1,000 per child on sign up and other financial
support if needed at other stages.
2. Honorary Garda – They grant the wish of children they support by making them Honorary Gardaí which includes a ceremony,
full uniform, badges, tours of a station etc. we organise birthday parties for them and Easter Egg drops at Easter etc. We have
photographers present at any events with at risk children as we’re always trying to create memories for them.
3. Project Haven for Heroes – They bring families on holidays in Ireland who wouldn’t normally get a chance to go away, due to
the severity of the child’s illness or due to financial limitations from the family.
4. Hospital Visits – they arrange for members of An Garda Síochána and volunteers to visit children in hospital and provide support,
a friendly chat and joy for the children and their families.
5. Sarah’s Christmas Gift – Each Christmas since 2019 they provide an aid initiative called ‘Sarah’s Christmas Gift’ done in memory
of hero Sarah Robinson, who passed away peacefully in 2019 at age 16, following a battle with cancer. Before she passed Sarah
made arrangements to give something back to the charity to support other families of Little Blue Heroes. In her memory Little Blue
Heroes provides family aid initiative at Christmas to Little Blue Hero families which includes shopping vouchers and fuel vouchers.
The fuel or ‘Yule Fuel’ includes fuel for the cars of families to assist their journeys to hospital appointments over the festive season.
The Little Blue Heroes Foundation is close to all Garda hearts and the support they have received over the last two years has
grown, while the number of families needing support has also grown