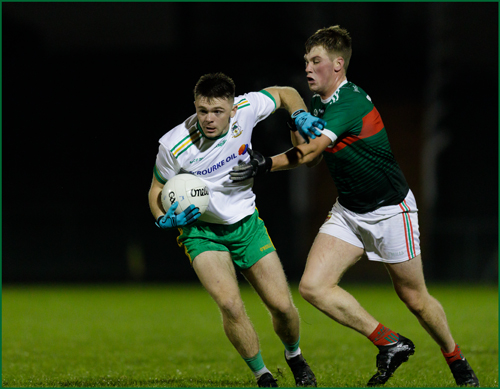 A more economical Carrickmacross booked their place in the next round of the senior football championship while consigning Inniskeen to the exit door in this tough, hard hitting contest that was played in ideal conditions in Castleblayney on Friday evening last.

This was a game that simmered on the edge for most of the sixty odd minutes, with tempers threatening to flare on a number of occasions that saw referee Xavier Coyle dismiss three players, two from Inniskeen, Aidan Woods on a second yellow card early in the second half and Gavin Dooley on a straight red card in the closing stages while Carrickmacross finished with fourteen players after Peter O’Hanlon was sent off in the closing minutes on a second yellow card and a couple of others were probably somewhat fortunate that they did not suffer a similar fate. Carrickmacross were only headed once in the entire contest and that after two minutes when Donal Meegan opened the scoring for Inniskeen. By half-time Carrickmacross had forged ahead by four points thanks mainly to a goal by Aaron Lynch in the twentieth minute and the accuracy of Sean Downey from frees. Carrickmacross extended their lead to 6 points fourteen minutes into the second half which turned out to be somewhat of a stop start affair with a number of running battles developing and scores at a premium. Carrickmacross though made the better use of the limited chances that came their way to hit five points in the second-half, while Inniskeen could only manage 3 to leave the Emmets winners by six at the finish.