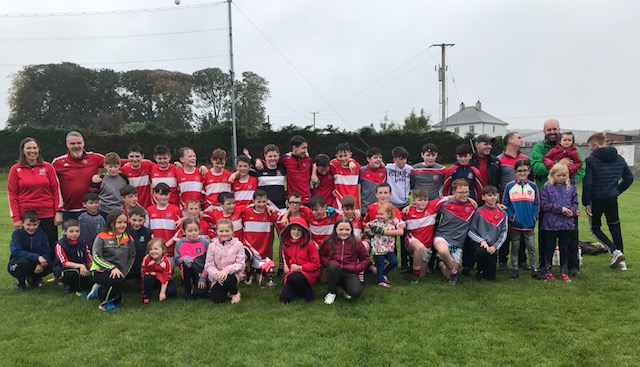 Sunday, day 2 of Gerry’s Prepared Veg U13 Championship Finals saw action move to the Drumhowan club which hosted the Division 5 & 6 double header. First up was the meeting of Donaghmoyne B and Monaghan Harps B in the Division 5 decider at 1pm.
The weather had changed dramatically from the sunny Autumnal weather experienced at Saturday’s Finals. However the wet conditions on Sunday didn’t dampen the player’s spirits and enthusiasm as both sides had their sights set on the Division 5 title.
Monaghan Harps made the livelier start dominating the opening exchanges racing into the lead by registering 0-02 off the boots of Shane McGarry and Ryan Grant plus a Rohann Malocca McKenna goal to put the town side up 1-2 by the 6th minute before Donaghmoyne had made any impression on the scoreboard.

Then talk about a turnaround!
When Donaghmoyne finally found their shooting boots they literally blitzed the Harps defence. A free converted by Dylan McMahon plus a goal off the same trusty boots in the 9th minute launched the turnaround bringing Donaghmoyne right back into contention. In a dramatic 9 minute spell Donaghmoyne registered a flurry of 4 goals the first one in the 11th minute off the boots of Ruadhan Duffy was followed by a brace of 2 goals off the boots of Kaelum McKevitt in the 12th and 14th minutes plus their 5th goal of the match by Oisín Keenan in the 20th minute. Harps did respond with a Ryan Grant goal in the 18th minute to reduce the deficit but after that dramatic period the score stood at Donaghmoyne 5-02 Monaghan Harps 2-2. As the clock ticked down to the interval Donaghmoyne added two more points thanks to the accuracy of Eoghan McGroder and Oisín Keenan with the halftime score 5-04 to 2-02.

This was definitely a game of 2 halves as the pace, energy and stunning scoring we witnessed in the first half was replaced by a slower game in the second half with scores hard come by as both sides were guilty of missed opportunities. It was Monaghan Harps which outscored Donaghmoyne by 0-5 to 0-2 in the second half. The 2 Oisíns – Keenan and Brannigan traded scores in the opening minutes and Harps captain Daniel Alexis added another minor which was followed by a 7 minute period when neither team registered a score. The now quiet Donaghmoyne side was slow to get on the scoreboard with their final point from Oisín Keenan as Harps added three more points courtesy of Oisín Brannigan, Jack McArdle and captain Daniel Alexis. Donaghmoyne had done enough in the first half to secure a thoroughly deserved victory but credit must go to Monaghan Harps for their never say die attitude right up to the final whistle but it was too little too late as Donaghmoyne were crowned Division 5 champions.