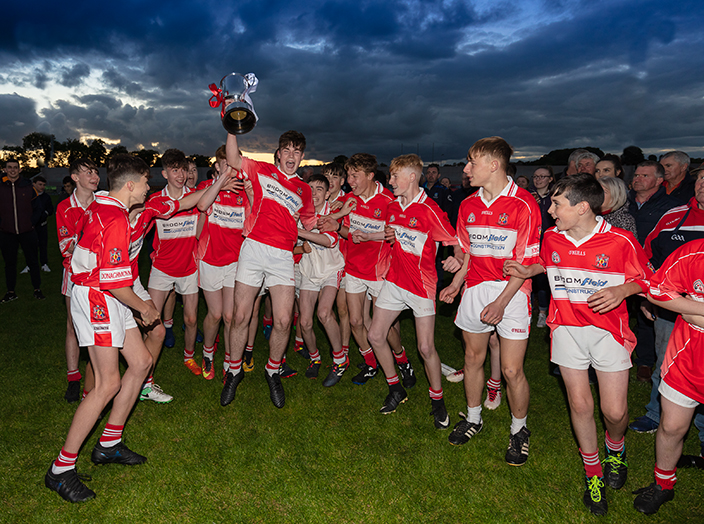 The pinnacle of u15 football was played out on Thursday evening the 6th of September  between two of Monaghan GAA’s heavyweights. The game began in a spirited manner with both of  these young teams executing the skills of the game to a level that conveyed class beyond their years. The opener going to Donaghmoyne courtesy of the boot of Kyle Finnegan. Donaghmoyne were sharper from the off and began to dominate possession and the scoreboard early on. Hugh Murnaghan had pinpoint accuracy from free kicks and pointed two and got one from play getting off to a flying start and putting his team five points ahead. At this point the Carrick team began to find their feet mainly through Flynn Holland. The quick wing forward kicked 3 points in quick succession to remind the opposition that no simple task lay ahead of them. Eoghan Mc Eneaney and Ciaran Murray for Donaghmoyne were impenetrable in defence and tackled ferociously throughout. They had their hands full in keeping with the tricky duo Jack McMenamin and Steven O’Rourke playing off the size and strength of Oisin Mills. The Carrick forwards combined well and on the 24th minute their efforts were rewarded with a goal that put them a point up for the first time in the game. This lead proved to be short lived however as Kyle Finnegan struck a goal for Donaghmoyne just before half time.

Donaghmoyne built on the confidence the goal instilled in them and began the second half much as they finished the first with Gavin McSkeane leading the charge growing into a dominant force in midfield. A mix up in the Carrick defence 12 minutes into the second half led to the ball ending up in the hands of Brendan Keenan who played in the on-form Hugh Murnaghan who finished comfortably to the net putting Donaghmoyne 4 points ahead. Carrick continued to fight back and displayed admirable resilience. Through hard running from a duo of Cormac Alfred and Darragh Mee Carrick manufactured another goal chance that fell between Jack McMenamin and Donaghmoyne keeper Darragh Watters both men bravely attacked the ball that resulted in a ferocious collision. Unfortunately nothing came of the attack. As the game entered into a long period of injury time Donaghmoyne began to guard the lead carefully while Carrick fought bravely until the end however the defining score fell towards Donaghmoyne as Eric Coleman was dragged down for a penalty that Matthew Marron made no mistake in finishing. The game concluded 1-8 to 3-10 in favour of the Reds, the scoreline not reflective of the competitiveness and spirit the game was played in and both teams will surely be able to walk away from the game proud and satisfied with their performance.