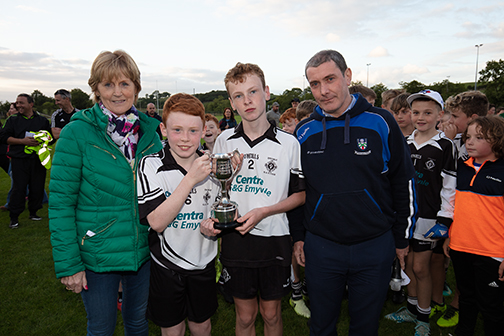 Following on from some spectacular Under 13 finals that have been played in recent weeks. This Division 6 Shield Final played in Drumhowan on Tuesday evening didn’t disappoint for excitement and tension.

Inniskeen started brightly thanks to some fine scoring from the trusty right boot of Micheal Marron and their captain Mark Hanratty chipped in with a neat point. Indeed the ‘Grattans’ were full value for their 2 point lead approaching the 20th minute mark and were unlucky on a few occasions not to be further ahead. However, for the remainder of the opening half Emyvale capitalised on a period of dominance and were rewarded with a clinical goal from the impressive James Sweeney who was well placed by midfielder Jack Mc Connon.  The goal from the aforementioned Sweeney helped his side gain a 1 point lead at the interval.

A major deciding factor in the outcome of this match was the deployment of Emyvale’s  Jack Mc Connon into the full forward line for the start of the second half. Throughout this period the Inniskeen defence struggled to deal with Mc Connon’s ball winning ability and distribution which yielded 2-1 over a blistering 10 minute period. Inniskeen to their credit did demonstrate battling qualities and were rewarded with a Hanratty goal and a point approaching the last 7 minutes of the contest. The closing stages were chaotic with both teams tackling with great intent. In particular Inniskeen invested huge effort in attack to retrieve the gap between the teams. But Emyvale were not to be denied and held on for a merited 4 point victory.