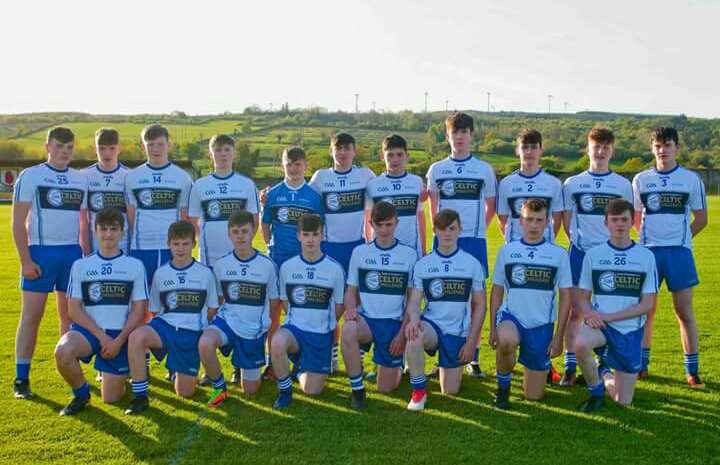 Over the last number of months Monaghan Hurling Development Officer Aidan Morgan,  has been busy delivering a number of Hurling initiatives across the county. Aidan has been able assisted by a number of volunteers from the clubs in relation to our Development Squads & U17 Celtic challenge team, this assistance is greatly appreciated. In addition we would like to acknowledge the support we receive from Pauric Dowdall & Ryan Gaffney Ulster Regional Development Officer.
Below is a brief report & photos from intiatives delivered over the last few months.
U17 Celtic Challenge
The U17 squad have played 3 games to date. An Excellent victory against Louth got them up and running followed by a 4 point defeat in a high scoring and very entertaining game against Leitrim. The third game was against Cavan were Monaghan never really got going for the most of the game leaving Cavan always in control. The final group game is against Longford on Sunday the 10th of June. The quarter final draw will take place after the final round. The quarter finals will take place on Saturday 16th June in Carrick on Shannon and Mopnaghan play Leitrim @ 4pm.The team is made up of players from Truagh, Monaghan Harps , Clontibret , Castleblaney and Carrickmacross.
U14 Hurling Development Squad
The U14s had their first blitz in Tyrone Gaa Centre Of Excellence on Saturday the 26th of May. The team had Games against Donegal ,Tyrone and St Galls from Belfast on the day. In windy conditions the lads hurled really well for periods but the standard of the other teams was above our level. Training will resume after the Feile and we will continue to work on our skills to help the players develop.
Coaching Workshop
A coaching workshop is planned for Friday 29th June in Monaghan Harps club. The workshop will be delivered by Martin Fogary, National Games Development Manager and will be aimed at coaches working with U12 and U14 players. Current coaches and new coaches are welcome to attend or anyone that has a keen interest in Hurling.
This will be a practical session followed by a Presentation by Martin.
For information contact Aidan Morgan on 0870998036.
Primary Schools Coaching
The Primary School coaching has almost come to an end. Since last September Hurling Has been coached in a total of 28 Schools throughout the County. 8 Schools took part in Our indoor Leagues. The Go Games Hurling and Skills competitions  was attended by 9 Schools. Our aim will be to increase these numbers in 2018/2019.
Tain Og U13 Youth Hurling League
The U13 Tain Og league was introduced to create competitive and meaningful games for teams giving them a chance to compete at there own level and above. Currently 24 teams are taking part including Monaghan clubs Truagh , Clontibret , Carrickmacross and Castleblaney with Latton and Monaghan Harps aiming to compete in 2019. Two rounds have already been played with the 3rd and final round fixed for the 18th June which will lead the competition into the semi final stage on the 2nd of July followed by the finals day on the 14th of July. The feedback from the clubs is very encouraging and we hope to progress this competition to U15 and U17 grades
Long Puc Competition 2018
The long puc competition is taking place in Cloghan on Tuesday the 12th of June at 7pm in Cloghan. Pauric Dowdall will be co-coordinating the event.
Participants can contact pauric on pauric.dowdall.ulster@gaa.ie or on 087-1353180.
U11 Farney Og Hurling Leagues
The Leagues are now up and running. Two blitzes have taking place in Cloghan with teams from Clontibret , Latton , Cootehill , Castleblaney and Carrickmacross taking part. This is a skills based league with a different skill been the focus for each blitz. The next blitz takes place in Cloghan on Monday the 25th June in Cloghan at 7pm. More teams are always welcome to attend.
Hurling Feile 2018
Best wishes to Castleblaney, Clontibret and Monaghan Harps who travel to the Hurling Feile this weekend in Connaught.
No doubt they will do the county proud.
The winner of the Monaghan Hurling Feile Skills Competiton was Henry Kelly from Clontibret.
U13 Farney Hurling Academy 2018

The Under 13 Farney Academy will take place on the 8th , 9th and 10th of August this year in the Monaghan Gaa Centre Of Excellence. Information regarding this will be out in the coming weeks.