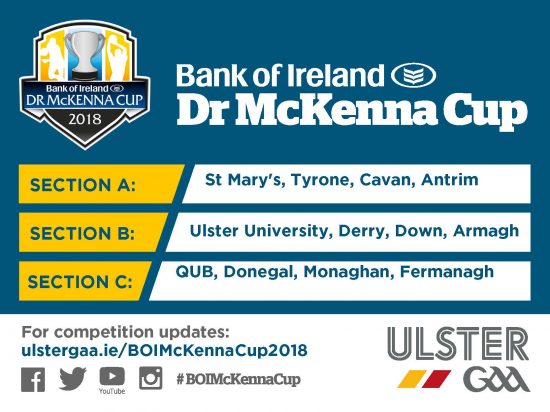 Monaghan will commence their Bank of Ireland Dr. Mc Kenna Cup Campaign with an away game to Fermanagh on Wednesday 3rd  January  at 8pm in Brewster Park. Their other games will be against Donegal on Sunday 7th at 2pm in Clones and Queens on Wednesday 10th at 8pm in Castleblayney. The semi final is fixed for Sunday 14th with the final on Saturday 19th January.

The squad for this campaign see 6 newcomers Barry Kerr,  Paraic Mc Guirk, James Wilson, David Garland, Barry Mc Bennett and Dean Connolly. Another 3 make a return after a period of absence  John Mc Carron, Conor Boyle  and Paudie Mc Kenna. The rest is a mixture of inexperience and experience from the 2017 Championship Squad. Many of the longer established players have been rested.

Please see squad below. Tickets details for the competition can be seen below squad. –

Ulster GAA have released a limited number of Competition Tickets for the 2018 Bank of Ireland McKenna Cup.

The tickets are priced at £20/€25 and will permit access to Round 1, Round 2 and Round 3 games involving your team, both semi-finals and the final – a potential saving of up to 55%!

To purchase tickets now before they run out or to get further information, supporters should visit ulstergaa.ie/boimckennacup2018 or call 028 (048) 37521900.

Bank of Ireland and Ulster GAA recently announced the renewal of their Dr. McKenna Cup sponsorship deal, which will run until the end of the 2020 campaign.