Juvenile training continues to grow strong with over sixty-four juveniles training in eight groupsfrom 8-17years old. Parents will be informed of their child’s group or any changes to times by text message each week. Juvenile membership is €10 and €2 per training session.

With thanks to generous sponsorship from MCK Services, Floorform Group and Corduff Handball Club we will be supplying all registered juveniles with a jersey and hoodie from bodibro for a small fee of €10 per Juvenile.

Bodibro have sent out sample sizes and they can be fitted at any of the training times this week.
€10 can be paid to any committee member.
Adults can purchase gear on the online shop when it goes live soon.

Our 40×20 singles league started in October and is into its finals week with 64 players in 10 divisions from beginner to senior levels taking part. The finals have started and will finish next week. The winners will each receive a pair of black handball gloves from errigal sports. Best of luck to all players.

Well done to our Juvenile players who took part in the County Championships finals last week at St. Mellans

Huge thanks to St Mellans for hosting the juvenile finals.

Best of luck to our adult members taking part in the County Championships whichare down to the quarterfinals stage.

Our Annual Quiz will be held in the Mountain Dew at Corduff Raferagh Community Centreon Friday the 27th of January at 9 pm. €20 per table. Raffle prizes would be much appreciated. Everyone is welcome to what will be a very entertaining night.

Our AGM will be held in the Mountain Dewon Thursday the 19th of January at 8:30 pm.

All members and parents are welcome to attend.

Membership is now due for 2023 and can be paid through foireann or to any committee member. 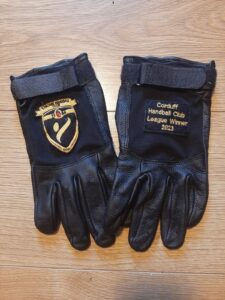 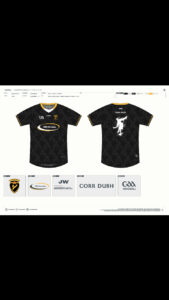 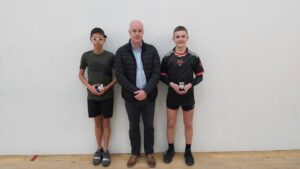 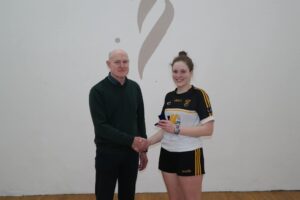 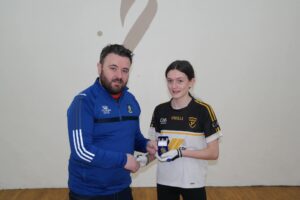 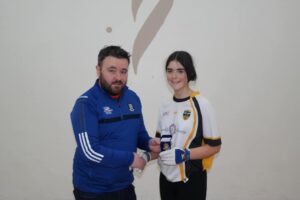 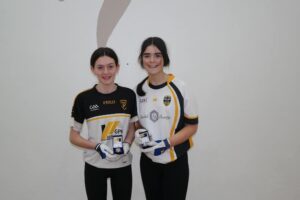 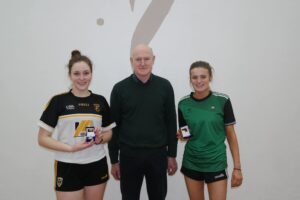 Juvenile County Championships. Harry Treanor represented the club in the U14 Boys Singles County Final last Sunday in the Harps complex, there he took on Liam Lappin from the Harps Club, from the off Harry had full control of proceedings, staying calm and controlling the alley well Harry took the first game 15-5, in the second Harry was probably a bit too relaxed and let Liam get into stride and was behind 8-1 at one stage, but Harry remained calm and even though he was getting good return from a variation of serves once Harry settled on his left side serve from the centre this proved the winning of the game and he kept Liam on the back foot from that til the end where he closed out the game 15-9 and took the title, a steady handballer in the alley but over the last year a massive improvement Harry and your ability to move and retrieve lost balls is very good, Liam also has the potential to be a big player in the future, keep going boys in the direction you are going and not only having success in club colours these are boys that will prove to be a handful in “blue & white” in the very near future, well done both on a good game.

Juvenile Coaching & Leagues. All juvenile leagues and coaching have resumed, some single league games remain after that we are looking at setting up a league to the same format as the adult league and if it is possible this will be played in the allocated slots of the coaching, but coaching will continue until we have a league format sorted, all will be informed in due course.

Irish Nationals. The Irish Juvenile Nationals are in action earlier this year than normal, the port is still open for registration, the nationals themselves are being played in Dublin and surrounding venues, but for some of the older groups there might be some qualifying games to played to reduce numbers, these games could be played anywhere nationwide, so be prepared to travel, but most likely all will be central as they normally try to accommodate as to not have people to travel too far, but we encourage as many as possible to enter as this is a great opportunity to be pitted against the best in Ireland, last chance to register is this Saturday the 22nd.

Cumann na mBunscol. The Cumann Na mBunscol competition will be held next Thursday the 26th , venue TBC, it is for national schools pupils U11’s & U13’s, all 4 local schools in the area have expressed an interest in organising players in all grades, good luck to all taking part, winners of the county section will play a provincial section in Belfast on February 5th, with the National Finals due to be held on February 18th most likely in Kingscourt.

Adult County Championships. The adult county championships are entering the business ends of things now, in Junior we “could” have all club players in the last 4, Ian Treanor is waiting on outstanding games to be played to see can he join Eoin Treanor, Patrick Mc Kenna & Fergal O Neill in the semi-finals, in Nov B we could have an all club final as Karl Mc Meel & Johnny Mc Kenna are both in opposite semi-finals, there has been some confusion in the minor grade as we await the outcome of Harps players, Oisin Hagan played and won a supposed to be semi-final against Andrew Comiskey in St.Mellans in devastating form last week, so we await county board direction from the other side, I have no details on Nov A going to print today, so keep an eye on social media for all games and results, good luck to all from the club that are still involved, all players must wear “club colours” when playing in county games, also county doubles only around the corner, so get teamed up and practising.

Mono League. The Mono league is down to semi-finals this week, Monday night past The Shamrocks played St.Macartans & The Seans played St. Pats on Tuesday evening, so no result going to print here, good luck to all teams that made it!

Adult Club Singles & Doubles. The club singles within the club have begun, the “Robert O Reilly Engineering” Cup (D1) and “Gola Woodworks” Cup (D2) fixtures are out, and the new “Tunnel Kerr” Cup (D3) will be commencing next week, doubles will soon be drawn up.

Meetings. Our next club meeting is on next Wednesday evening January the 25th, @ 8:30pm, all please attend.