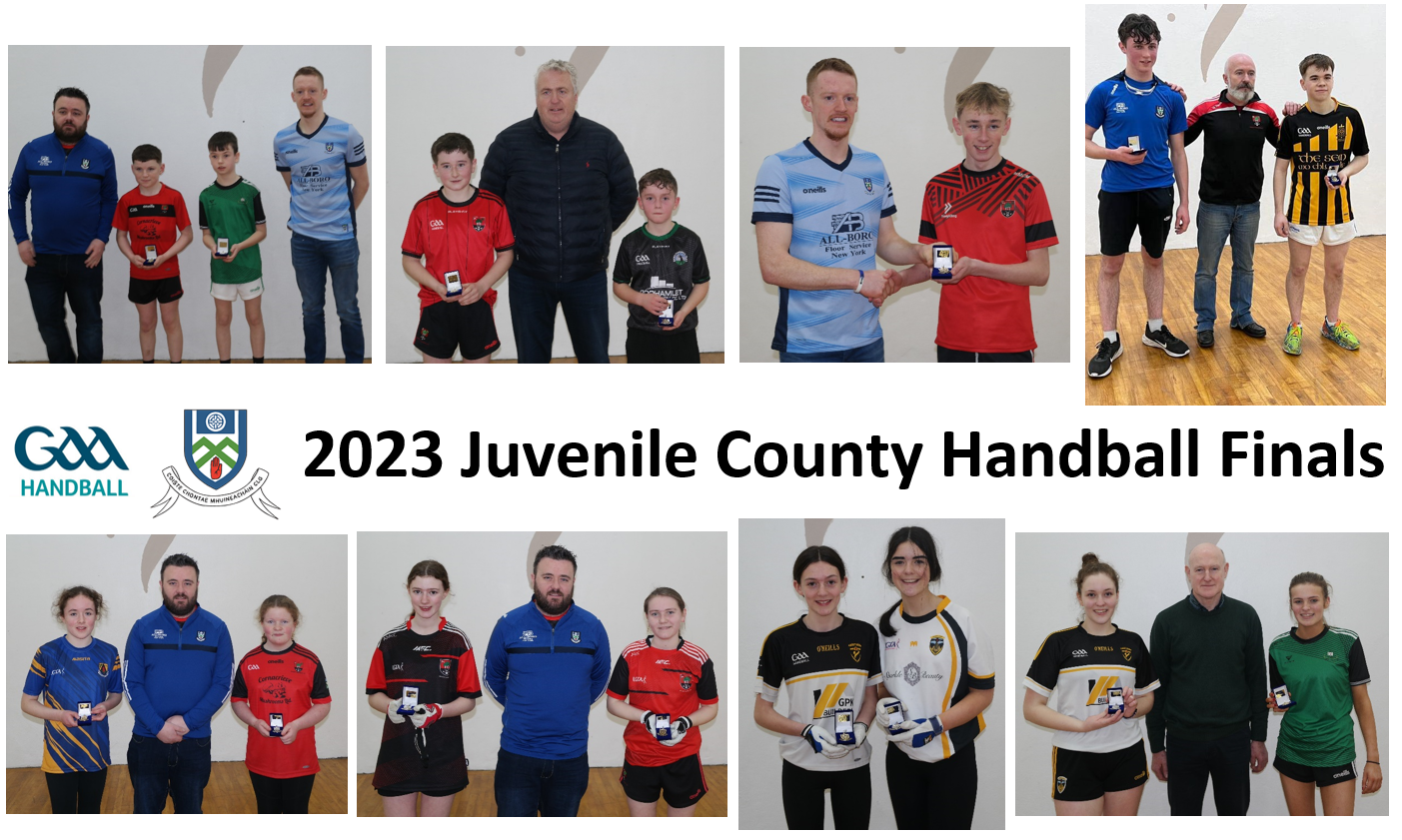 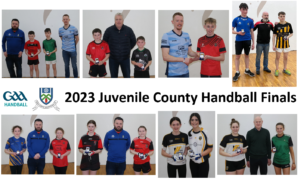 Match Reports below incl. edited excerpts from St Mellan’s, Emyvale and Corduff’s Club Notes:
In the Boy’s U12 Final, Shay Mc Kenna of St Mellan’s HC took on Aaron Bannon from the Monaghan Harps Club, showing no nerves in his first county final Shay took full control from the off, with great serving and taking great back wall shots Shay was cruising and took the first game 15-4, after a short break Shay took off from where he left and again was in full control, especially from his serving, but Aaron was a good player and had a good side arm serve but nothing fazed Shay no matter what Aaron threw his way and he took the 2nd game and the title 15-2. 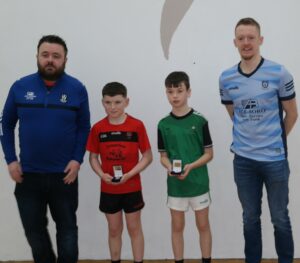 Next in was St Mellan’s Beibhinn Mc Cluskey in the Girls U12’s Final, there waiting was Tegan Clerkin from Bawn, Tegan had a great serve and was pushing Beibhinn back all the time and took the first 15-1, Beibhinn’s serve was working well when she got the chance but any slip on serve and it too straight Tegan was punishing, and she got Beibhinn out and took over talking the 2nd game 15-3, a good effort from Beibhinn but Tegan was just too strong on the day. 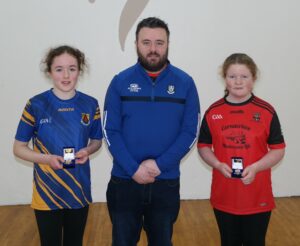 As the afternoon moved on the Boys U13 Final took place where St. Mellan’s HC’s Odhran Mc Meel took on Cormac Clerkin from Bawn to a capacity crowd, and the two boys didn’t disappoint the crowd, early on Odhran was in control and looked to closing in on victory in the first game leading 11-4, but we knew what Cormac had in abundance was calmness, and he didn’t panic and slowly but surely clawed back into the game and took it 11-15, but Odhran came out settled down figured out where he was going wrong, and didn’t let up in the 2nd game and when in control he drove home winning 15-10 to force a tie-breaker, after that game Odhran was full of confidence and knew what he got do and proved it as he stamped his authority on the tie-breaker taking it and the title 11-3, and both players were greeted with a rousing applause and both deserved it. 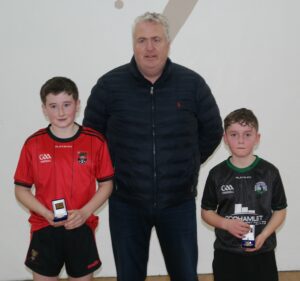 The next game was an all-St Mellan’s club affair in the Girls U14’s Final where Leah Mc Carron played Fionnuala Mohan for the title, the first game was tit for tat and both girls rattled off good serves and could have went any way but Leah just got on a good roll and took the first 15-8, and still on that roll Leah never let up and kept Fionnuala on the back foot and took the 2nd game 15-0, but must be said a massive improvement girls on serving and in general play, well done. 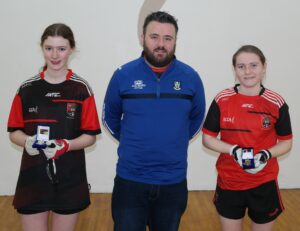 In the Boy’s U15 Final, St. Mellan’s Myles Mc Meel was up against Monaghan Harps’ Nathan Regiac, again another first for Myles as in his first singles final he was a bit nervous but still settled and was leading throughout and took the first 15-11, but Nathan refused to wilt, so Myles slowed things down with a left wall lob serve and then picked Nathan off when the chance arose, this proved dividends as he took the 2nd game and title 15-10, another great and well deserved win, a great effort from all not just on the day but the weeks leading up the finals, hard work pays off!!!! 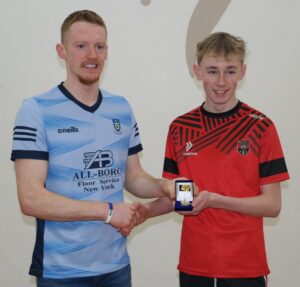 The Girls U15 final was an all club affair for Corduff, as it has been proven at all levels of handball the most important skill is the serve and this again was in proof in this final as Claire Corrigan (Corduff) had too much for Lily Comiskey (Corduff) on the day, Claire won 15-2, 15-0, sometimes playing team mates in final in itself can be a tricky ask, but well done to both and keep it up girls! 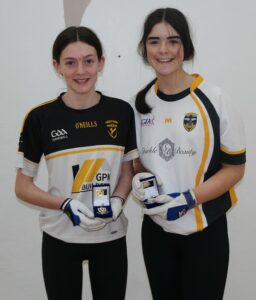 The Girls U16 final saw Emily McGinnity of the Monaghan Harps Club take on Corduff HC’s Lucy Oliver, Emily’s experience was massive different as her general power play was too much for Lucy to live with, but still she persevered on and put up a valiant effort but lost 15-2, 15-1, not a easy task to go in against some one like Emily with so much experience, but again great to see the girls in participation. 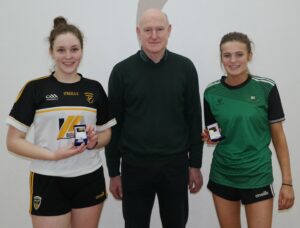 The last game of the day was the boys U17 final where Dylan McKenna (Emyvale) took on Ethan McCarron (Mon Harps), this was a hard hitting game, early on Dylan looked to have the 1st game sown up and served game ball possibly 10 times but Ethan would not go away and clawed back at Dylan until Dylan won 21-14, this gave Ethan confidence after his revival, as in so he took the 2nd game 21-11, the tie-breaker didn’t fail to deliver excitement either as it Dylan took an early lead, again Ethan came back and was serving for game at 10-9 but Dylan got back in and won it 11-10, definitely a great game to close the finals day on! 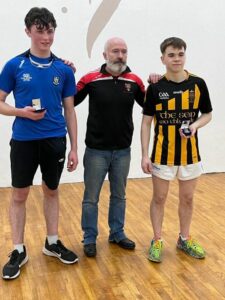 On a whole all games were played to a full house and by the looks of things handball is in a very safe place in Monaghan, after the doubles then our attention will turn to the provincial arena and lets hope all our hard work can deliver silverware there, so a big well done to all clubs on the over display of handball on the day and it is great to see so many girls playing and enjoying the sport so lets hope we as a county can also build on that.