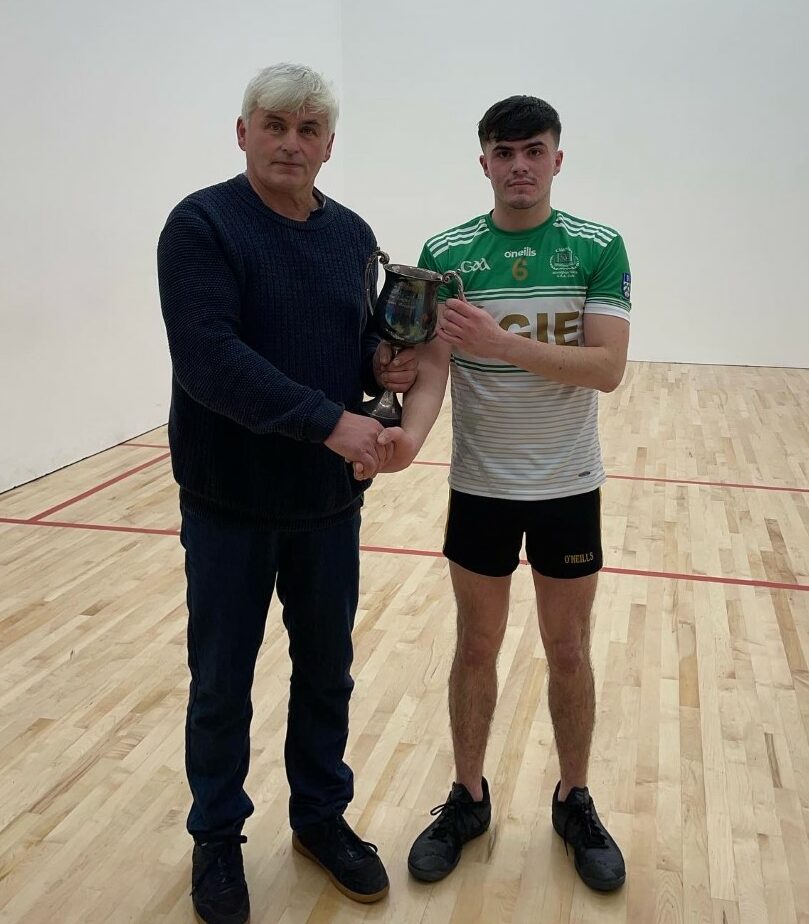 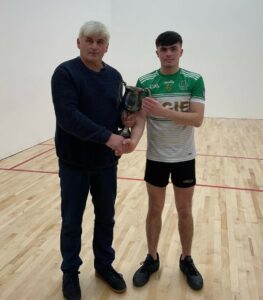 It was the final they had all been waiting for.

The setting was a packed Corduff Handball centre.
The two clubs involved were Bawn and Monaghan Harps.
The protagonists were Gavin Coyle versus Eoghan Mc Ginnity – without doubt the two best players in Monaghan. The former already a Senior champion. The latter the All-Ireland Minor champion twice over.
Covid could not delay this much-anticipated final.
So who would finish as champion?
Both players have skills to burn. Both possess the ambidextrous talent of putting the ball away with apparent ease. Each one with the speed and agility to quickly cover every part of the court.
And so it began.
Gavid delighted his supporters by burying the ball for the first point.
Would this set the tone for what was to follow?
Eoghan, unfazed, waited for his opportunity to regain service and this he did with the sweetest of backwall kills with his left hand.
Game on!
Paul Cassidy was the official in charge and did an excellent job given the speed of movement of these two speed merchants.
Gavin in particular served low and hard to Eoghan’s left while the latter mesmerised everyone with a disguised spin serve that had his opponent in trouble time and again.
Any weak return was duly punished with a spectactular kill shot.
The young pretender duly amassed an unassailable lead that he did not relinquish. Game 1 ended at 21 points to 8.
Game 2 had the predicted response from Gavin. This time he scored more ace serves to the left and pounced on every loose shot from his opponent.
This was Coyle at his best.
However Eoghan was calmness personified. He stayed in touch mainly due to the variety of his serves to the left and right. Their unpredicability caused trouble.
Gavin kept the lead until the players reached the 13 point mark.
This was perhaps the most tense period of the match. It could have gone either way.
Eoghan is rarely short of confidence and took some astute timeouts to regroup.
He came back firing on all cylinders winning point after point, many after spectacular retrievals from the back of court.
He found himself at game ball but Gavin fought back to reach 15 points.
However there was to be no late comeback and Eoghan finished in style ( 21-15) to become a fully deserved County Senior Champion.
Full credit to all officials involved and a special mention to those who live streamed a brilliant final.