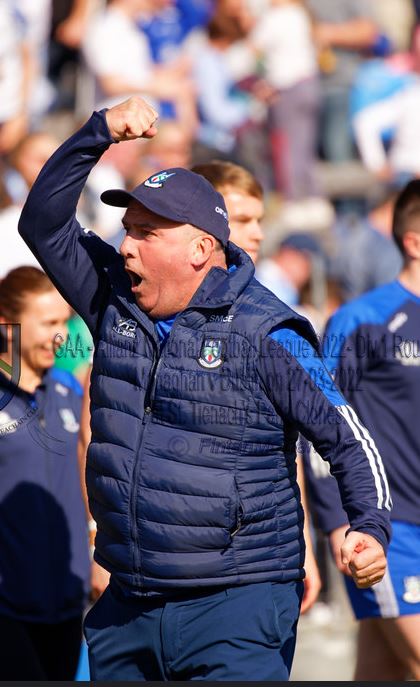 Seamus McEnaney was initially ratified as Monaghan Senior Football Manager back in 2004 and held the position until 2010. Within that time Seamus managed the Senior Football team to win an Allianz League Division 2 title in 2005 and promotion to Division 1 football.  Returning to the Monaghan management setup as Monaghan Minor Manager in 2018 Seamus guided our Minor Team to win an Ulster Minor Championship title.

Taking up the position as Monaghan Senior Football Manager for a second stint in 2019 Seamus with his team has ensured Monaghan GAA retained our Division 1 status to date in the Allianz Leagues for 9 consecutive years and also led the team to an Ulster final in 2021.

In his parting statement Seamus McEnaney has said…. “I would like to announce that I will be stepping down as Monaghan Senior Football Team Manager with immediate effect. At this time, I would like to thank Monaghan County Board for their unwavering support for me and my management team and players over the course of the last three years.

I want to thank each and every member of my management team and backroom team for their enormous contribution and commitment in pursuit of success for the Monaghan Senior Team under my stewardship.

I want to thank Rosie and my entire family for their steadfast loyalty, tolerance and sacrifice in light of the time away from them that the role as an intercounty manager demands. Family are not only important. Family is everything.

I want to thank all of the sponsors of Monaghan GAA for their generosity and financial support of our team, particularly All Boro Floor Services/Traynor family as our main sponsor.

The Monaghan players are a very special bunch of men who have been fantastic ambassadors for the people of Monaghan in the past and during my term as manager. I have no doubt that they will continue to represent this great county with pride and distinction into the future.

Managing Monaghan has been one of the great privileges and honours of my life, one that I have never taken for granted. I am very grateful to the Monaghan County Board and my club, Corduff Gaels, for giving me the opportunity to represent them in the role as Monaghan Team Manager.

Over the past three years we have experienced a huge range of emotions, some fantastic days and performances to moments of immense sadness. I reflect on the sudden passing of my great friend and main sponsor Phil Traynor and the devastating loss of our 2018 Ulster Minor Championship winning captain Breandán ‘Ógie’ Duffy followed by the huge emotion of the victory over Armagh to reach our first Ulster final in 6 years only to lose the final agonizingly. This contrasted with this year’s final day beating The Dubs to maintain Division One status to ensure that Monaghan supporters can enjoy Division One football for a ninth consecutive year, a record we are rightly proud of.

I want to conclude by thanking the fantastic gaels of Monaghan who always supported the Monaghan team and who lifted our team performances with their passion and fervour from the stands.

I will now return to help my club and have the privilege of being a Monaghan supporter in the stands again.

I want to wish this great group of players every success in the future”.

Monaghan GAA chairperson Declan Flanagan said “ I would like to take this opportunity to record my sincere thanks to Seamus and his backroom team for all their commitment, dedication, sacrifice and contribution to Monaghan GAA.  Seamus’s loyalty devotion, and professionalism to Monaghan GAA is certainly without question.  His passion and enthusiasm for the progression and development of football in Monaghan has been steadfast from 2010.  It is with sadness but deep appreciation I wish Seamus all the very best for his future endeavours”