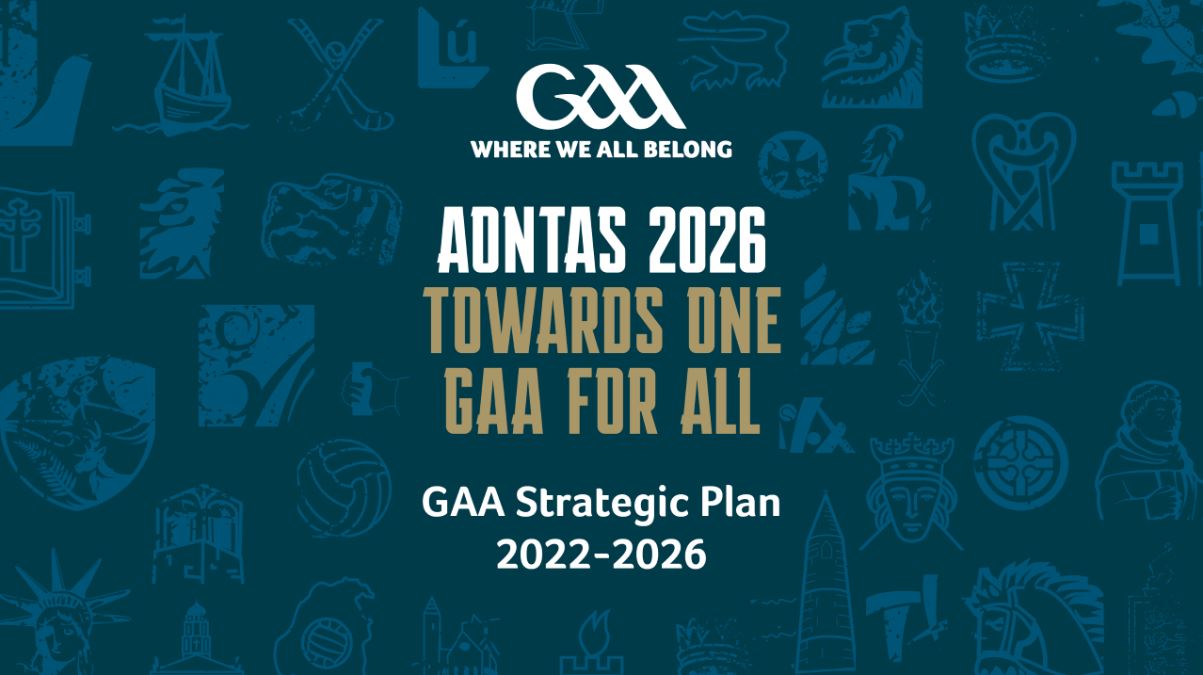 The GAA has today launched a new strategic plan entitled ‘Aontas 2026 – Towards One GAA for All’, to grow and sustain the Association over the next five years.

An event held at St Fechins GAA Club in Co Louth was attended by Uachtarán Larry McCarthy and Ard Stiúrthóir Tom Ryan along with representatives of the Association where details of the plan were announced.

The strategy features a variety of objectives to realise the GAA’s vision as a sustainable community-based and volunteer-led Association where as many as possible, participate in Gaelic games and culture for as long as possible.

The stated priorities of the Association between now and 2026 are:

The headline initiatives to be pursued within these priority areas include:

Uachtarán CLG Larry McCarthy said: “The importance of our clubs to the communities they serve was never more evident than it was during the harrowing Pandemic. If the GAA is about People then it is appropriate that we have a strategic plan that delivers for everyone and after this detailed consultation process, I believe we have a strategic plan to allow Gaelic games to face the future with confidence.

Ard Stiúrthóir Tom Ryan added: “The significant level of engagement from every level of the Association that was used in preparing this plan had a direct input into the final document and helped shape our vision for the coming years. Ensuring that Gaelic games is robust for whatever challenges are ahead and is capable of staying relevant to our members and clubs will be our priority.”

Why is it happening?

The Association’s previous strategic plan, Fís Shóiléir 2021, expired last year so the Association set about developing a new strategy in line with Larry McCarthy commencing his term as Uachtarán.   The strategy aims to give units and members direction on where the Association wants to be by 2026 and how we plan to get there. It specifically makes choices about what we will and will not do as an Association.

In March 2021, the GAA’s Management Committee (An Coiste Bainistíochta) established a volunteer-based Steering Group to coordinate the planning and consultation process on its behalf. The members of the Steering Group were:

This group met 14 times to guide the process and ensure that everyone had ample opportunities to have their say in shaping the Association’s future.

How did the consultation process happen?

One of the largest ever consultation processes was undertaken to help inform the strategy.  Highlights included:

The process undertaken generated many insights which informed the strategy.  For instance, 81% of respondents to the public survey completed in September 2021 felt that the GAA, LGFA and Camogie Association should strive to form One Association; 9% were unsure and only 10% were against the idea. Such was the strength of support for this to happen, the overall plan is entitled ‘Aontas 2026 – Towards One GAA for All.’ This is just one example of how the views of GAA members influenced the strategy.

A Strategic Plan Implementation Committee chaired by the Uachtarán will oversee the implementation of the plan.  This committee will also include the Ard-Stiúrthóir and four Provincial Secretaries / CEOs. They will meet on a regular basis to review progress before a mid-point review takes place ahead of February 2024 when the next Uachtarán starts his role. This review will allow the new President to refresh the specific actions to be taken