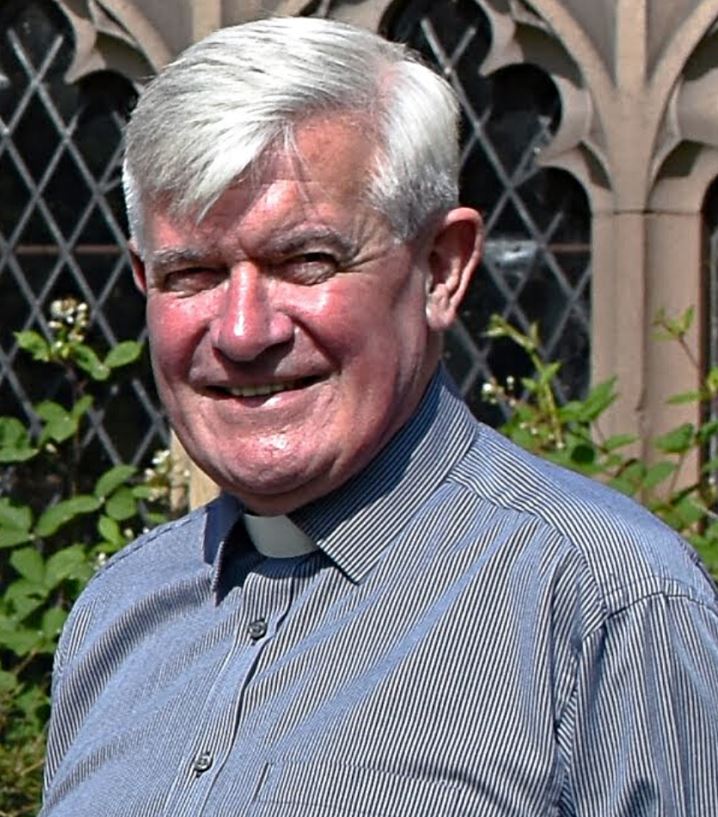 The entire Diocese of Clogher mourns the death of Canon Pat McHugh, Kesh, Co Fermanagh, a priest of the diocese and former Parish Priest of Castleblayney (Muckno). Canon McHugh died in a Dublin hospital yesterday afternoon following a long illness which he bore with great courage, fortitude and faith in the Lord.

Upon learning of his passing, the Bishop of Clogher, Bishop Larry Duffy, expressed his deep sorrow and gave thanks to the Lord for Canon McHugh’s life and his dedication to pastoral ministry and education, both in the diocese and elsewhere, as well as his lifelong commitment to communities in so many ways: ‘Fr Pat, as he was popularly known, was a big man in both stature and renown in the various places he ministered in. He was a tireless worker, a priest who faithfully bore witness to Jesus Christ in the different parishes and educational settings in which he ministered and in the communities he served. His commitment to the Church and its ongoing renewal was total. This he manifested until the end; only last September when his health allowed it, he answered the call to service when I asked him to take on the role of Diocesan Director of the Synodal Pathway here in Clogher. He did this with the great enthusiasm and courage, attributes for with which he was so well known. In the last years of his life, he bore illness with great fortitude and openness to the Lord.’

Bishop Duffy continued, ‘Fr Pat’s commitment to best practice and perfection also shone through in his overseeing and completion of the major renovation work to St Mary’s Church in Castleblayney during the years up to 2018. That project is among the many fine legacies he left us. So too are his contributions to education in St Macartan’s College, Monaghan and to priestly formation and academic excellence in other places. Nor should his role in the GAA in counties Fermanagh and Monaghan be forgotten. Our diocese and communities are richer for his being among us and poorer for his passing.’

‘On behalf of the entire body of clergy, religious and lay people of the diocese, I extend sincere and prayerful sympathy to Fr Pat’s brothers, sisters, sisters-in-law, brothers-in-law, nephews, nieces and many friends. May the Risen Lord, the eternal priest, now receive him and present him to God the Most High!’

Canon Pat McHugh was a native of Killynoogan, Kesh, in the Parish of Ederney (Cúil Máine), close to the Fermanagh-Donegal border. Following his studies at St Patrick’s College, Maynooth, he was ordained to the Priesthood in June 1979. He subsequently served on the teaching staff of St Macartan’s College, Monaghan from 1980 until 1987 when he was appointed to be CC at Threemilehouse in the Parish of Kilmore & Drumsnatt. He also later served for periods as CC in Scothouse (KIlleevan-Currin-Aghabog) and at Aghadrumsee, Co Fermanagh (Clones parish). In addition, he worked in the human formation of students for the priesthood in both Kent in England and Valladolid in Spain. He was also Director of the Western Theological Institute in Galway and Knock for several years before taking up appointment as PP of Castleblayney in 2010 where he ministered until his retirement due to ill health in September 2018. During that period, he oversaw extensive renovations to and re-ordering of St Mary’s Church in Castleblayney. He was able to return to Castleblayney in December 2019 to take part in the re-dedication of the church. In September 2021 he took up appointment as Diocesan Director of the Synodal Pathway in Clogher.

Fr McHugh was also a devoted GAA member – as a player, coach, administrator and supporter. He won a McRory Cup Medal with St Michael’s College, Enniskillen in 1973, played his home club in Ederney and coached several successful teams in St Macartan’s College, Monaghan as well as with clubs in the parishes he ministered in. He also served, at different periods, as an officer of both Monaghan and Fermanagh County boards of the GAA.

Funeral cortège will travel from Dublin on Thursday evening, 28th April, via Saint Mary’s Church, Castleblayney, (at approx 5.15pm – 5.30pm), Monaghan town, Omagh, Ederney and making its journey to the family home in Killynoogan to repose. House Strictly Private to family. Funeral from there on Friday evening (29th) at 6.30pm, arriving at Saint Mary’s Church, Pettigo, Co Donegal, for evening prayers and to repose overnight.