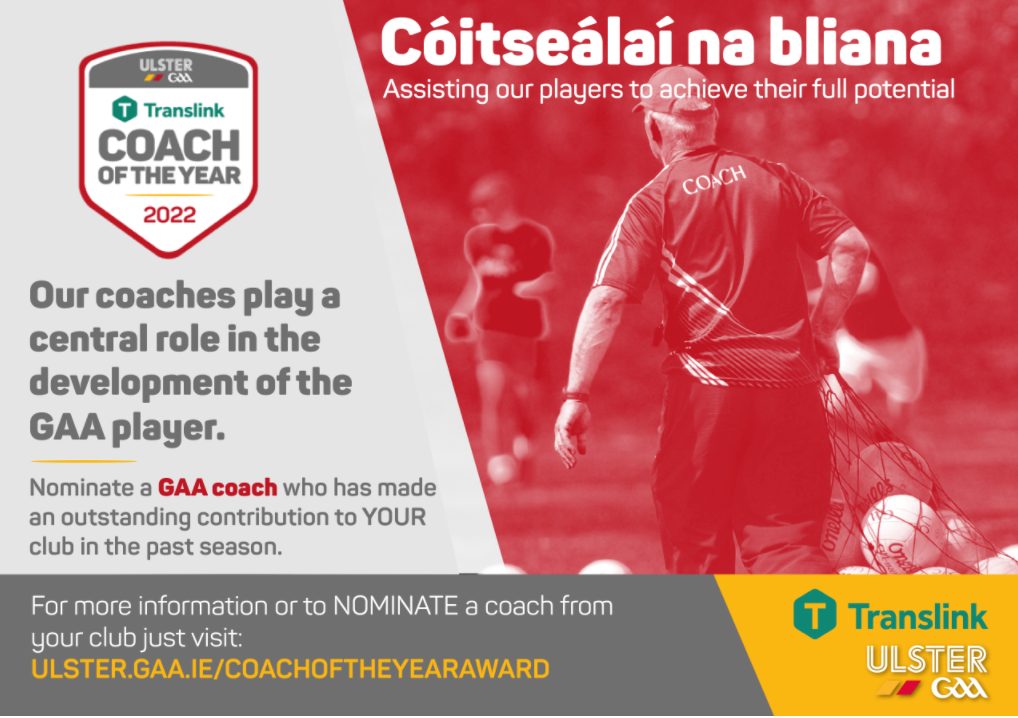 Now in its fourth year, the initiative celebrates the work carried out by volunteer club coaches and managers across the province, recognising their outstanding contribution to Gaelic games and local communities here. The awards are free to enter and club coaches from across every code and level in Ulster are eligible.

Players, parents, committee members and supporters have until Sunday February 13th to put forward their entry. Following public nominations, a panel of experts including two-time All-Ireland winner, James McCartan and Irish News sportswriter, Neil Loughran, will select one finalist from each county to go forward to a public vote.

The overall winner will be announced at the end of February and will receive specially commissioned O’Neill’s Sportswear for themselves, and free coach travel for their team, courtesy of Translink.

“Following the huge success of this initiative in recent years, we are delighted to partner with Ulster GAA again on the Coach of the Year award, which celebrates the superb work carried out by volunteer coaches at all levels within the Association last season.

“There are hundreds off grassroots managers and coaches who make a big contribution to the communities Translink serves, so we’re pleased to be able to recognise them in this way.

“So, whether it’s a youth manager who always goes the extra mile, rain, hail or shine, to make sport fun for the stars of the future, or a senior coach who inspires everyone in the club with their passion and commitment, submit your nomination and let us hear about them.”

“Ulster GAA is delighted to see the return of this award, in partnership with Translink, to recognise volunteer coaches across the province.

“GAA coaches really are the driving force behind our players, assisting them to achieve their full potential, across all codes and grades.

“I would ask club members and players to have their say by nominating someone who they believe made an outstanding contribution to their club in the last season.”

To nominate a coach for this award, visit ulster.gaa.ie/translinkcoachoftheyear

Tell us who you think deserves to win!

The Translink Ulster GAA Coach of the Year is an award which celebrates the incredible work carried out by volunteer coaches within Ulster GAA.

Following the phenomenal success of the initiative in previous years, we’re once again calling on clubs, players, parents, teachers and teams to nominate coaches who are most deserving of the award.

Whether it’s an under-age manager who, come rain, hail or shine, always goes the extra mile to make sport fun for the stars of the future, or a senior trainer who inspires everyone in the club with their passion and commitment, we want to hear about them!

The winning coach will be declared Translink Ulster GAA Coach of the Year. They will WIN specially commissioned commemorative training gear for themselves and 10 FREE coach trips for their team over the next 12 months (subject to T&Cs).

Nominations are open until Sunday 13th February. When submitting your nomination, please remember that Translink and Ulster GAA are looking for evidence to ensure the nominee meets some or all of the criteria:

After nominations have closed a panel of experts will select a shortlist, to include one finalist from each county. After that it’s back over to you for the public vote to decide who will be declared the Translink Ulster GAA Coach of the Year.

The winner will be announced on Monday 7th March.

Submit your club’s nomination for the Translink Ulster GAA Coach of the Year here:  https://ulster.gaa.ie/translinkcoachoftheyear/. 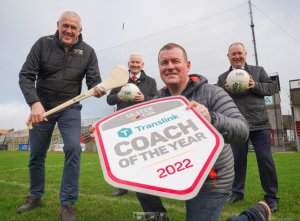