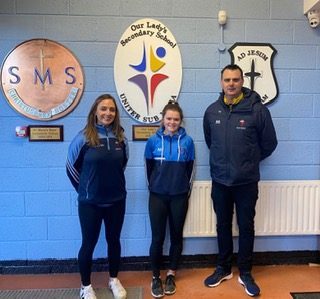 Our Lady’s Secondary School excellent record in the Ulster Ladies Colleges All Star Awards scheme continued on Friday December 10th when it was announced that Amy Callan, captain of the Senior Girls GAA team, was selected on the Ulster Ladies All Star team for 2021 / 2022. This brings the total number of Ladies All Star Awards in the school to twenty two in ten years – an extremely impressive record by any school’s standards.

Amy was among six girls selected by the school to attend an initial trial in Cloghan where over 130 girls from across the province attended and she impressed the selectors present to be invited back to a second trial along with 64 other players that was held in Cookstown on December 9th. The school community was delighted when it was announced that Amy was selected on this year’s Ulster Ladies Colleges All Star team. Amy is the current captain of the Senior Girls GAA team and she also played a key role with her club Donaghmoyne Ladies as they captured the Monaghan and Ulster Senior Championship titles.

This All Star award comes as a timely boost to the Senior and U/16 Ladies GAA teams who will both contest Ulster A semi finals after Christmas. Speaking at the school during the week the Principal Mr Kelly congratulated Amy on her outstanding achievement ‘this is an excellent individual achievement for Amy. Amy and peers on the senior team have been and continue to be excellent ambassadors for Gaelic Games in the school and they are great role models for the younger students in the school. I am delighted that Amy’s leadership, ability and commitment has been recognised at such a prestigious level. I have no doubt that with continued hard work and application Amy has a great future ahead of her in Gaelic Games. I would like to pay particular tribute to Amy’s coaches Mr Graham, Ms. Mc Enaney and Ms. Atkinson for the fantastic work they are doing with the girls and indeed all our GAA coaches who give so generously of their time to help our students develop and display their talents and skills at the highest possible level in Ulster Colleges football. This is the schools twenty second Ladies All Star in ten years and this high level of success is a testimony to the great work by all teachers involved in coaching & promoting Gaelic Games in our school’. For the record the twenty two All Stars since 2012 are as follows: 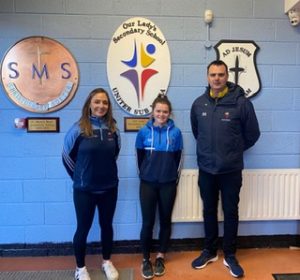