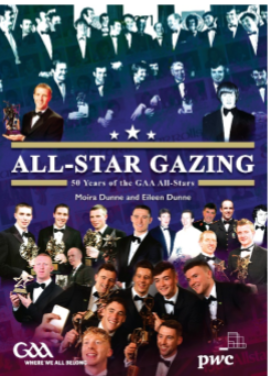 All-Star Gazing, a book which marks the 50th anniversary of the All-Stars in 2021, will be launched on Thursday 11th November 2021 at 7pm in Croke Park by Michael Lyster with GAA President, Larry McCarthy in attendance.

This will be preceded by a Virtual Book Launch, hosted by PwC, which can be accessed at the following link: https://www.gaa.ie/news/50-years-of-all-stars-celebrated-in-newly-published-book/

The book, has been written by the daughters of one of the scheme’s founding journalists Mick Dunne and features:

· Contributions from over 100 leading hurlers and footballers

· Full listing of every All-Star team since 1971

“The GAA All-Stars is the most prestigious sporting awards scheme in Irish society and has gone from strength to strength since its inception in 1971.

While the GAA and various sponsors – current partners PwC among them – have played a central role in running the scheme, one of the most important pillars of the All-Stars has been its independence and integrity, provided by the role of GAA journalists making the all-important selections of both nominees and overall winners. To that end, it is fitting that the Dunne sisters, Eileen and Moira, should be the driving force behind this excellent publication to mark the 50th anniversary.”

“We would like to congratulate Moira and Eileen Dunne on the launch of their fantastic book celebrating the 50 year history of the All-Stars. The book showcases a superb collection of All-Star players down through the decades, whose talent, teamwork and sheer determination have awed us all. As proud sponsors of the PwC All-Stars we are delighted to celebrate the 50th anniversary and to show our support for the book. No doubt it will be in high demand with all GAA fans.”

Fifty years on, the story of the All-Stars has been penned by Moira and Eileen Dunne, daughters of Mick Dunne, who along with his fellow journalists, Paddy Downey, John D Hickey and Pádraig Puirséal, got the scheme up and running in 1971.

Using their father’s records as a starting point, the sisters met over 100 All-Stars and other stakeholders, who shared their memories of All-Star banquets, All-Star trips along with reflections on what the accolade means to the players, families and communities.

The book includes a listing of each Football and Hurling All-Star team from 1971 to 2020, and for the first time ever, a complete list of all players nominated over the past 50 years.

Some of Gaelic games’ top footballers and hurlers talked about the significance of winning an All-Star award:

“Winning an All-Ireland is amazing but to win an All-Star at the end of the year is unreal. It is the perfect year”.

“Winning the All-Star meant I was joining the other great players who had won it. I was up there with Anthony Daly, Johnny Dooley thinking, I have arrived

“An All-Star is something every player wants to win. I was privileged to be the first person in Leitrim to win one.”

“It was really special to receive an All-Star with Ollie in 2009 and a great night for Mam and Dad.”

The authors will be available for press or media interviews. For further information please contact:

Eileen Dunne RTÉ newscaster and radio presenter and director of the Kennedy Summer School. A UCD graduate she spent time in France as a teacher before returning to Ireland to

embark on her long career with the national broadcaster. She is a regular book reviewer for the Culture section of the RTE website.

The Dunne sisters grew up with Gaelic Games and spent much of their youth travelling the country to matches with sister Una, mum Lilly, and dad, the broadcaster Mick Dunne. Their childhood is one of summer family picnics en route to Thurles, Killarney, Clones or Crossmaglen. They continue to follow the games ardently as GAA season ticket holders.