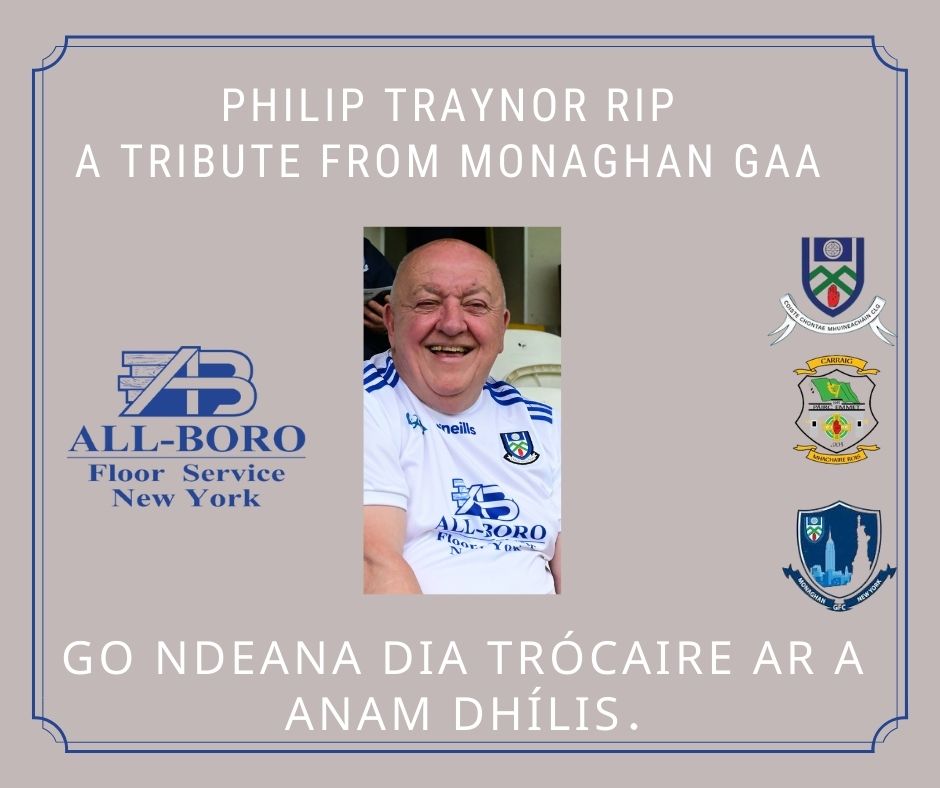 It is with a heavy heart we say goodbye today to our dear friend and member of our GAA family Philip Traynor. Our thoughts, prayers and heartfelt sympathy are extended to Philip’s family Anne, and their children Courtney, Ryan, Grainne, & Ciara. Philip’s Bother Martin & his Sister-in-law Maureen (Castleblayney), Mary & Brother-in-law Pearse, nephew David Kirk (Magheracloone), the extended family circle and Philip’s many friends.

For Philip, like most of us, his love began for the GAA within his native and beloved club Carrickmacross Emmetts in Monaghan. A love which remained with him very proudly throughout his life. His passion, pride, sportsmanship and devotion to his club and county were simply infectious and was just not evident as a GAA Gael but with the legacy that he will be affectionately remembered for.

Moving to the United States of America in 1984 to join his late brother Patrick, he quickly became involved with the Monaghan Club in New York and sponsored the team with his newly formed company All Boro Floor Services. His stories of ‘meeting at Gaelic Park’ on Sunday mornings epitomised the existence of so many Irish GAA people in the Big Apple.  Philip’s welcoming support and guidance will live long in the memoirs of all those Irish emigrants arriving in the US to make a new life. Philip’s unique personality made it extremely easy to form a lasting friendship. His passion for the GAA continued in New York through his unwavering support to Rockland GAA, Monaghan GAA NY, New York GAA and his adopted county Longford Football Club along with numerous other charitable organisations.

As a devoted Monaghan man Philip’s dream came true in 2019 as his New York based company All Boro Floor Services were announced as the new main sponsors of his beloved Monaghan GAA. Seeing Monaghan advance to an Ulster semi-final against Fermanagh a few weeks ago before his untimely passing will always be remembered by us who witnessed the pride on Philip’s face. A dream for every unassuming Irish immigrant to give back to an association they had so much love and support for. To have celebrated this special moment and win with his son Ryan will now be a treasured memory.

His presence will be very sadly missed from our games here in Monaghan but Philip’s massive selfless contribution to Monaghan GAA and to our association generally can never be forgotten or under estimated. Our success as a county to date and the success of generations to come will be established on Philip’s love for his native Gaelic games, his club and his county.

Philip’s is predeceased by his parents Eugene (RIP) & Kathleen (RIP) and brother Patrick.

Funeral service will be live streamed  Please note, there are two different links for the Mass and Cemetery.