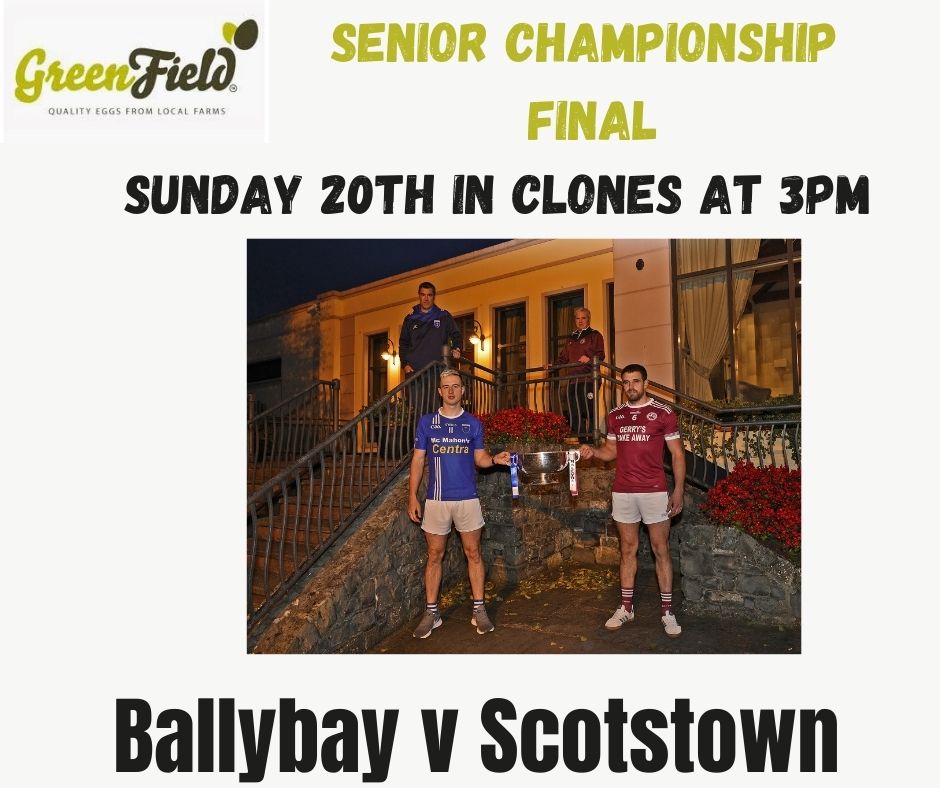 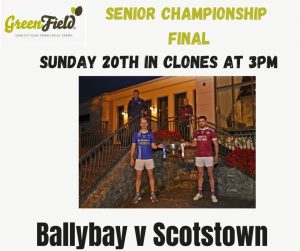 A vastly different club campaign has produced a very familiar final pairing, with Ballybay and Scotstown set to contest the Greenfield Foods Senior Football Championship decider for the second time in three years.

A Conor McCarthy goal made the difference as Scotstown ran out narrow winners in the 2018 county final and they continued their dominance of this pairing when they knocked Ballybay out after a replay at the semi-final stage last year. Ballybay have made the semis nine teams in the last ten years and have also won three of the last four league titles, but they haven’t managed to lift the Mick Duffy Cup since 2012, while Scotstown are bidding for a fifth championship in six years after Clontibret ended their five-in-a-row tilt at the final hurdle last October.

The new round-robin format brought in for this condensed season saw Ballybay and Scotstown go through to the semi-finals as group winners. Having drawn with holders Clontibret in the opening round, Ballybay went on to defeat Magheracloone, Donaghmoyne and Inniskeen to top Group One. Meanwhile, Scotstown topped Group Two with four straight wins over Truagh, Latton, Carrickmacross and Castleblayney.

The semi-finals took place at today’s venue a fortnight ago, when Scotstown produced a strong second-half performance to convincingly defeat Carrickmacross for the second time in the space of a few weeks, before Ballybay once again edged out Inniskeen. The Grattans hit a remarkable 1-25 in an epic encounter that went to extra-time, but Colin Malone’s men found the net four times to maintain their unbeaten run.

Ballybay’s eye for goal has contributed to their 21-point average tally to date, while Scotstown have hit 16.6 points per game. Both sides have strong defensive records, with Scotstown boasting the lowest average conceded at just over 10 points.

Ballybay had to fend without the injured Paul Finlay for much of the group stage, but the veteran returned to good effect last time out to boost an attack also featuring the talents of Christopher and Shane McGuinness, Paddy O’Neill and Thomas Kerr. Dessie Ward has been in good form alongside Ciarán Galligan at midfield, while their back-line features the experience of the Wylie brothers as well as the pace of Eoin McKearney, Tiernan McSkean and Colm Lennon. Adam Counihan is the new first-choice keeper for the Pearse Brothers.

In Rory Beggan, Scotstown have an effective last line of defence and often a first point of attack, behind the likes of Dónal Morgan, Damian McArdle, Ryan O’Toole, Michael Meehan, Paul Sherlock and Jack McDevitt. Darren and Kieran Hughes and Frank Caulfield are key men in the middle third for Colin McAree’s side, with Conor McCarthy and Shane Carey leading a forward line that could also feature Matthew and Francis Maguire, Orin Heaphey and Seánie Mohan.