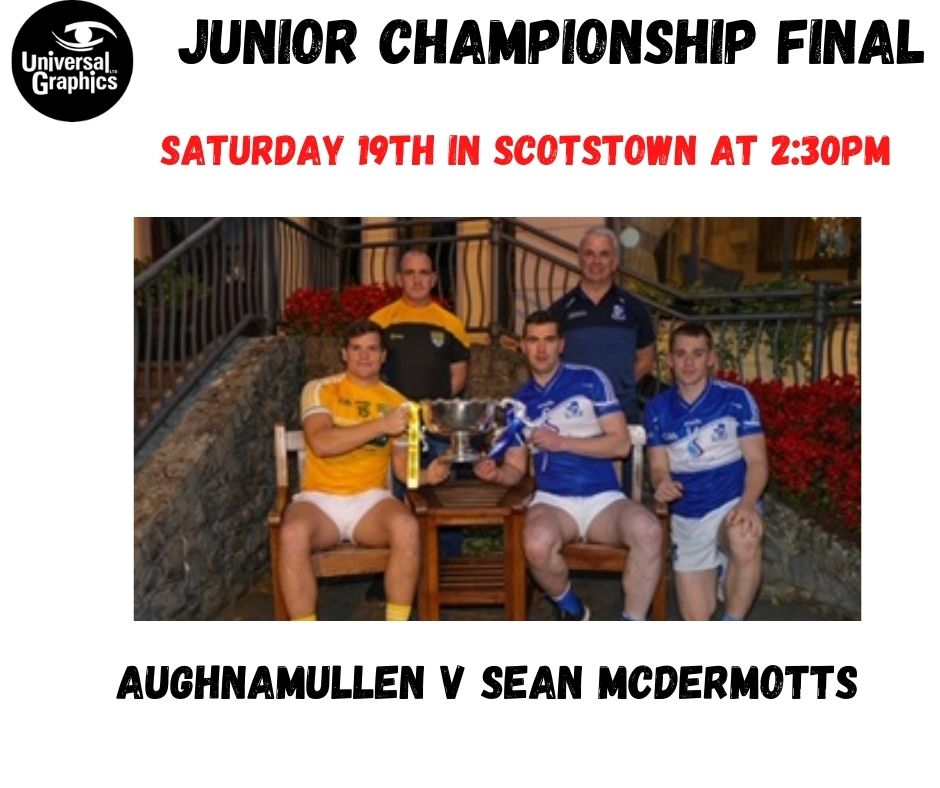 The Universal Graphics Junior Football Championship Final will see two teams battling it out for a quick return to the Intermediate ranks.

Aughnamullen and Seán McDermotts were both relegated last year, having competed well in the second tier at times in recent campaigns, but they have made their way through to the JFC Final after topping the groups. Wins over Toome, Scotstown and Clones saw Gabriel Bannigan’s Aughnamullen secure their status in Group Two ahead of the final round where a much-changed side lost narrowly to Drumhowan.

Seán McDermotts did likewise in Group One by defeating Aghabog, Oram and Killeevan, before they fell short against Rockcorry in a game that had no bearing on their position as group winners. Into the knock-out stages, the average winning margin is just three points across four of the six games; excluding the two involving Aughnamullen, who have run out convincing winners at the expense of both Aghabog and Oram. The Seáns had four points to spare in their quarter-final against Drumhowan, while Clones battled past Rockcorry and Oram won their derby with Toome. It went down to the wire for the Threemilehouse men ten days ago, when they pipped perennial semi-finalists Clones under lights in Emyvale.

Aughnamullen have spent most of their time in Intermediate since winning the JFC back in 2007, with a brief stay back in the bottom division seeing them claim JFL honours in 2014, while they subsequently fell short in finals in 2015 (IFL) and 2017 (IFC). Seán McDermotts were IFC runners-up as recently as 2018, while they have lost several junior deciders since winning the league in 2010. They last won this competition back in 1990.

Aughnamullen have a team backboned by a very talented crop of youngsters who have progressed in recent years. County senior Mícheál Bannigan, who won a Sigerson Cup and a HE All-Star with DCU earlier this year, spearheads the Sarsfields’ attack, while Tiernan Duffy has been their top scorer to date and Darren Geoghegan (a hat-trick scorer against Oram) and Kevin Sheridan have also contributed well up front. Kieran Duffy, Seán Sheridan and youngster Jason Duffy have also provided threats from deep, with the return of Pete Dooney bolstering their options in the middle third, where 2018 Ulster MFC winner Joel Wilson has also shown some good form. With Thomas Marron in goals, Paul Connolly anchoring the defence and Mark McArdle often acting as a sweeper, Aughnamullen have conceded less than 10 points per game en route to the final.

2018 All-Star nominee Niall Kearns is the main man for Seán McDermotts, starting at full-forward in their early games before reverting to a more familiar midfield role, where he could be partnered by either Páraic McGuirk or Conor Kearns, who could also feature in a defence that also includes youth in James Murphy and James Clerkin and experience in Ashley Maguire, Philip Farrell and Emmet McElvaney (the latter is the remaining link to the Seáns team that went up to senior back in 2002, when current manager Gary Larkin was a key forward). Former county keeper Mark Keogh is back between the posts for the Seáns and has conceded just one goal in his five appearances. The Seáns will also look to the likes of Noel Rice, Martin McGuirk and Oisín McKenna to provide the supply for Adam O’Driscoll and Paddy Kieran in the inside line.

Aughnamullen powered through to a first JFC Final since 2007 in some style with this prolific win over Oram in Blackhill. 2017 IFC runners-up Aughnamullen stepped through the gears in the final quarter to rattle in five goals and send out a signal of their intent to make a quick return to Intermediate. Darren Geoghegan netted a hat-trick for the Sarsfields, while Tiernan Duffy made light of a reported hamstring strain to produce a starring performance that saw him kick 1-8. With Pete Dooney’s return to the starting team helping Aughnamullen dominate midfield, the likes of Mícheál Bannigan and Kevin Sheridan also thrived up front. Jason Irwin had his moments for Oram, who also saw Berat Türker make a great penalty save in the first half to keep them in touch, but Aughnamullen had too much up front.

Seán McDermotts are through to the JFC Final for the third time in five years after they rallied late on to edge out Clones in a thrilling finish under Emyvale’s floodlights last Wednesday night. A brace of added-time points by Paddy Kieran guided the Seáns over the line against a Darren Freeman-inspired Clones side who were left to rue a wides tally of 12.

Clones looked to have timed their run to perfection when four unanswered points, including three from Freeman which took his total into double figures, propelled them into a one-point lead, but there was a late sting in the tale as they fell just short at this stage for the fifth consecutive year. The likes of Paddy Kieran, Páraic McGuirk and Niall Kearns stepped up in the decisive moments for the Seáns as they maintained their hopes of a quick return to Intermediate.