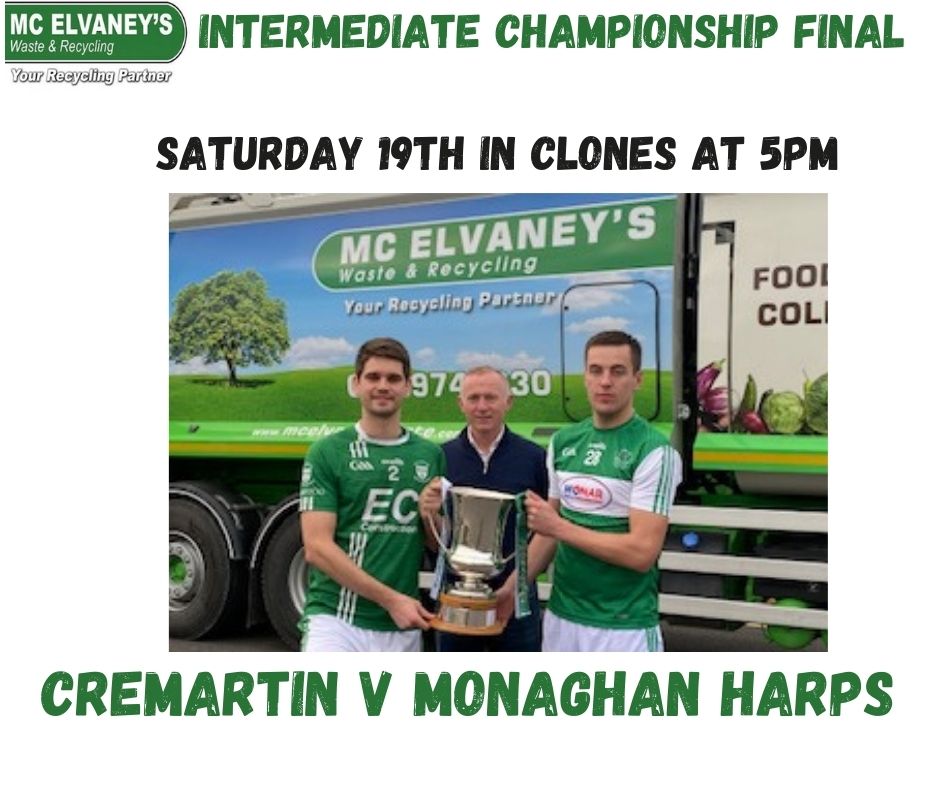 The IFC has been as fiercely contested as ever this year, with Cremartin and Monaghan Harps set to cross paths in the final for the first time, 17 years after the Harps won narrowly when these clubs contested the JFC decider.

The new round-robin stage didn’t dull the competitive edge, with both groups ultimately being decided on the final day. Cremartin and Corduff both went through Group One unbeaten after their round-three stalemate, with another draw for the south-Monaghan side in Scotshouse a week earlier eventually allowing the Shamrocks to top the table on seven points, having beaten Éire Óg, Blackhill and Currin along the way. Promoted sides Blackhill and Éire Óg went on to retain their Intermediate status for 2021, with the 2019 Ulster JFC winners giving Doohamlet a scare at the quarter-final stage and the Smithborough side winning the relegation play-off final against Currin.

It was even tighter in Group Two, where the fate of several teams went right down to the wire. Back-to-back three-point wins against Killanny and Tyholland proved enough for Emyvale to cling on to top spot on score difference ahead of Doohamlet despite letting a big lead slip in a draw with the latter in the final round. That result also saw Monaghan Harps edge into the quarter-finals by virtue of their head-to-head record against Killanny, after those teams both finished on four points. Killanny subsequently ensured that they would avoid relegation by seeing off Currin, while Tyholland did likewise by proving far too strong for Éire Óg.

An average winning margin in the competition of 4.6 points has dropped to an incredibly low 1.25 points across the quarter-finals and semi-finals, with the latter double-header in Scotstown producing two one-point cliff-hangers, with Monaghan Harps pipping Emyvale for a second time in a few weeks and Cremartin edging out IFC specialists Doohamlet in an extra-time epic. The four knock-out games are among 18 out of 27 (including three draws) to have been decided by one-score margins in this year’s IFC.

Cremartin qualified their first IFC Final in over 30 years after they emerged on the right side of an epic derby against Doohamlet in Scotstown. Cremartin’s four-game unbeaten run looked to be drawing to a close when they trailed by six points nearing the end of the hour, but a late burst of 1-3 left Doohamlet shell-shocked. There were still plenty of twists in the first half of extra-time, but Cremartin kicked for home in the last ten minutes to secure a memorable win. Doohamlet had earlier recovered from a lacklustre first-half performance to hit an unanswered 1-5 in the third quarter, with the introduction of Colin Walshe after his injury lay-off turning the game on its head. The O’Neills ultimately fell short of what would have been their fifth IFC Final appearance since 2010, however, with ten points from free-taker and IFC top scorer Paddy McNally plus goals by defenders Kevin Nolan and Jack Brannigan guiding Cremartin through.

Monaghan Harps edged through to the IFC Final after a closely-contested derby against Emyvale. Having beaten their near neighbours by two points in the group stage last month, the Harps went through by the minimum margin this time to set up a clash with Cremartin. A superbly-taken goal by Éimhín Morahan towards the end of the first half proved crucial for the Harps, who also had influential performances from the likes of Conor Galligan, Aodhán Óg McAnespie, Brendan Óg Ó Dufaigh and Kevin Loughran. Emyvale were level on eight occasions, but despite the best efforts of Daniel McMahon and Robbie McAlister, the 2018 JFC winners could only manage four points from play as they fell short of a first IFC Final appearance since 2000.