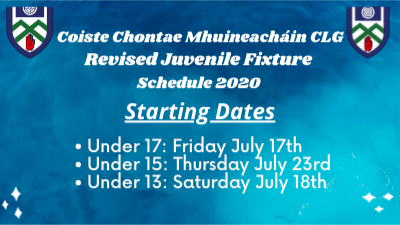 Monaghan GAA is delighted to announce that in accordance with the GAA roadmap for a return to Gaelic Games activity Monaghan GAA  has released a revised 2020 Juvenile fixture schedule.

Revised fixtures and structures for football are designed to offer a specific season for Under-13s to Under-17s across a 6-8 week period. It is by necessity shorter than usual going from the middle of July with games on a weekly basis through August aiming to be completed mid-September. A proposal for hurling is also in the pipeline.

Focus is now on getting back to playing competitive matches across the age groups U13-U17, with the recommendation for the younger age groups from U11 down to focus on training and coaching within the clubs. Details of Cúl Camps were also announced earlier in the week.

Throw-in for competitive games will be the 17th July . When competitions are up and running  Tuesdays will be normal for U17s, Thursdays for U15s and Saturdays for U13s. The fixture schedule has been issued to clubs.