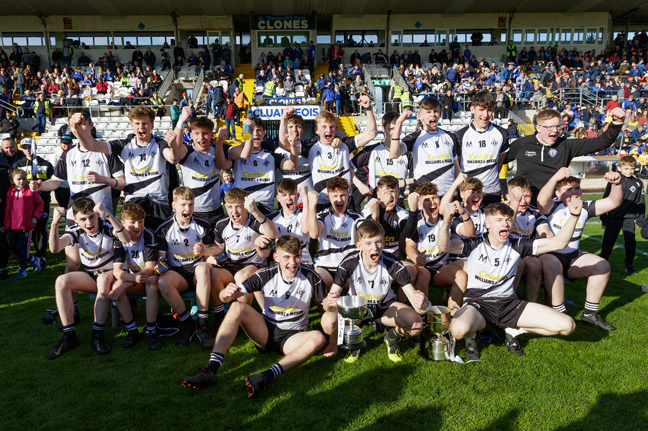 Emyvale won the MFC Division One title for the first time since 1950 – completing the double in the process – when they edged out Latton in Clones last Sunday.

It was Latton who made the better start when Darragh Dempsey hit the net, but his fellow county minors Karl Gallagher and Michael Hamill were on target at the other end for Emyvale and with Man of the Match Ben Ryan and Aidan McKenna also hitting points, the league winners led by 0-6 to 1-2 at half-time.

The game was effectively decided during a spell midway through the second half, when Latton saw a couple of goal chances go abegging, while Emyvale found the net through a ’45 by Ben Ryan and a well-worked effort from Rio Corrigan. Dempsey continued to lead Latton’s charge en route to a personal tally of 1-8 and when Kevin Fitzpatrick and Michael Coyle hit late points, they had the gap down to two. Emyvale held on, however, to secure a famous win after an exciting finish.