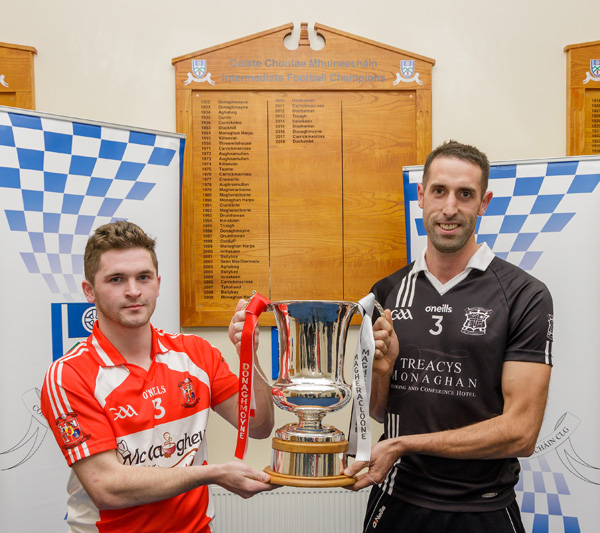 After both winning their recent McElvaney’s Waste & Recycling Intermediate Football Championship semi-finals in Inniskeen, Donaghmoyne and Magheracloone will return to Páirc Grattan for today’s final (throw-in at 3.30pm).

Magheracloone secured their place in the final by holding off the challenge of Emyvale in Inniskeen. Paudie McMahon hit an early goal for Magheracloone, but often wasteful finishing meant they struggled to put the game away. David McAlister hit the net to bring Emyvale right back into contention midway through the second half, but Magheracloone retained their composure and late points from Alan McCahey, Ryan Farrelly and the impressive Allan Kieran guided them through.

Donaghmoyne qualified for their second IFC Final in four years when they proved too strong for Corduff in their delayed derby at Inniskeen. David Garland was in top form here, leading seven Donaghmoyne scorers with nine points as they hit the front. Michael Connolly hit a brace of goals to keep Corduff in touch, but Donaghmoyne closed out a deserved win.

Donaghmoyne were relegated from the senior ranks in 2017, while Magheracloone followed last year after a long stint in the top division that saw them reach several finals and win a first county title in 2004. Magheracloone were in the SFC decider as recently as two years ago and they went close to making it back-to-back appearances 12 months later, only to lose narrowly to champions Scotstown.

These teams would have been widely tipped to contend since the start of the year and they have both taken the direct route to today’s final. Donaghmoyne needed a penalty shoot-out to get past Killanny, before coming from 11 points down to stun Emyvale and producing their most complete performance to date in their semi-final win over Corduff. Magheracloone were drawn in the preliminary round, but high-scoring wins against Tyholland, Monaghan Harps and Corduff got them through to the last four, where they held off the challenge of Emyvale.

These sides drew in the opening round of the league and have since gone on to finish in the top two positions. Both had secured home semi-finals ahead of last weekend’s final round, with a big win over an understrength Donaghmoyne team back in June helping Magheracloone on their way to topping the table.

Donaghmoyne’s star man is their captain and top scorer David Garland, with the county forward having hit top form in the comeback against Emyvale and last time out against Corduff. The pacy Stephen Finnegan and 2013 Ulster SFC winner Pádraig Donaghy have both offered Donaghmoyne plenty, alternating between the half-back and half-forward lines, while Niall Keenan and Francis Markey can give the Fontenoys a strong platform at midfield.

Cormac O’Connor, Darren McElroy and Ronan McDonald are also regulars on the scoresheet for the 2016 IFC winners, whose team is now largely backboned by the minors who enjoyed trophy-laden years between 2013 and 2015. Fergal Keenan, Stephen Cunningham and Mikey Murnaghan have been ever-present in defence, with goalkeeper Shane Garland often offering an extra option in possession.

Magheracloone, who are likely to start with 11 of the team who contested the 2017 SFC Final, can call on a potent mix of youth and experience. Despite injury keeping the in-form Michael Metzger out of their semi-final, the Mitchells have an array of scoring threats up front in the likes of Alan McCahey, Paudie McMahon, Allan Kieran and the ever-green Tommy Freeman, whose long service to the county included an All-Star award in 2007.

County U-20 Liam Óg Murray is an option either at full-forward or midfield, while Jamie Kieran and the strong-running Gavin Doogan also give Magheracloone strong options in the middle third. Magheracloone’s 13 ever-present players during their run to the final includes their entire defence. Keeper David Kirk and defenders Michael Jones, Peter and James Ward, Paul McArdle, Killian Rudden and Conor McKeown have each started all four IFC games for James Kieran’s side.