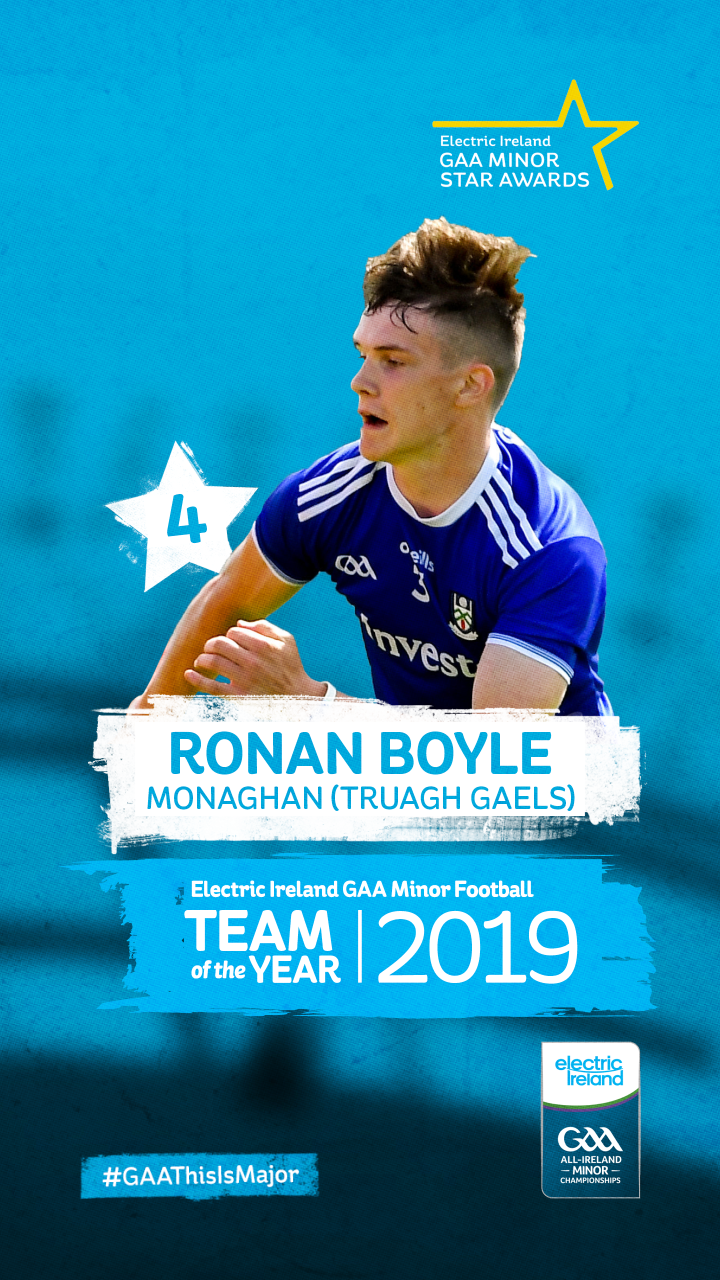 Ronan Boyle has been named as one of just 15 players in the Electric Ireland Minor Star Team of the Year 2019!!

The 2019 season featured an incredibly high standard of play, showcasing the bright future of the GAA. Minor players across the country showed their resilience, commitment and dedication this season, proving once again that there is nothing minor about playing Minor.

This year’s Electric Ireland Football Team of the Year features four standout players from All-Ireland champions Cork, four players from six-time winners and 2019 finalists, Galway, two players from Munster champions Kerry, two players from Connacht champions Mayo, and one player from each of Kildare, Monaghan and Tyrone. The team was selected by a panel of GAA experts, including former Dublin footballer, Tomás Quinn and Donegal’s most decorated footballer, Karl Lacey, and was fed into in part by Electric Ireland’s ‘Player of the Week’ initiative on Twitter. The panel will also select an overall Football Player of the Year whose name will be announced at the 2019 Electric Ireland GAA Minor Star Awards event.

Karl Lacey, Electric Ireland Minor Star Awards Panel Member, commented: “As a former County Minor, it is a massive honour for me to recognise the excellence of these young men. It really resonates with me, having put so much into my own Minor career, the importance of celebrating these players commitment throughout the season. Playing Minor is a key stepping stone in any players GAA career, and an age grade where important lessons and values are learned. It is only right that the achievements, commitment and dedication of these players is celebrated and what better way than an event especially for them and their families, the Electric Ireland GAA Minor Star Awards.”

The Football and Hurling Teams and Players of the Year will be awarded at the third annual Electric Ireland GAA Minor Star Awards, set to take place at Croke Park on Saturday, 28th of September, while the Hurling Team of the Year was unveiled on Tuesday 3rd of September. In line with Electric Ireland’s ‘This is Major’ campaign, the Minor Star Awards create a major moment for Minor players, showcasing the outstanding achievements of individual performers throughout the Championship season. The awards recognise the effort of not only the Minor players, but those who support them day in and day out, from their coaches to their parents, teachers and clubs – all who have played a significant role in getting them to where they are today.

This year Electric Ireland’s #GAAThisIsMajor campaign, now in its sixth year has reflected on the positive impact that the Minor Championship has on players long after their days on the field as a Minor have ended, as seen in The Barbershop with Electric Ireland, a four-part video series featuring the 2019 Panel reflecting on their own careers at Minor.