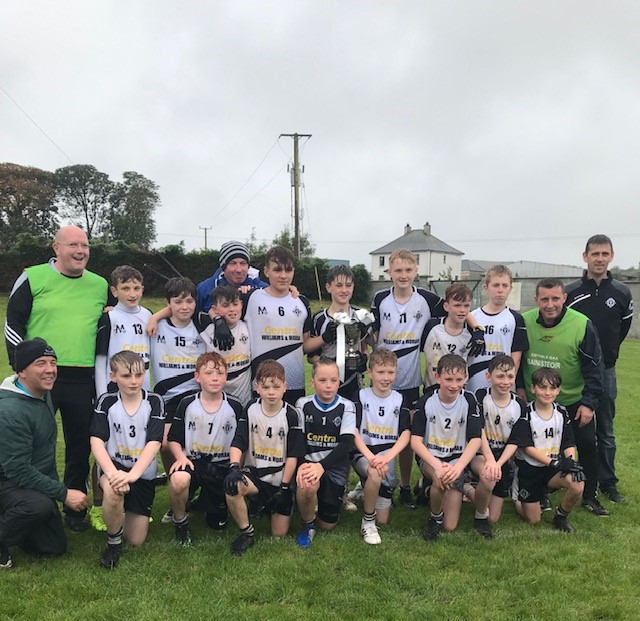 Qualifying for a championship final is a brilliant achievement and last weekend Emyvale not only qualified for one Gerry’s Prepared Veg U13 Championship Final but they qualified for 2 and they didn’t capture only one title but they captured 2 U13 titles within 24 hours! Yes, 2 titles. Great credit is due to the Emyvale Club for their hard work and dedication in promoting juvenile football and this work is now paying dividends with 2 titles at U13 level in 2019.

Damp conditions prevailed in Drumhowan for the second match of Gerry’s Prepared Veg double header between Emyvale and Carrickmacross Emmets. However, as in the first match the weather didn’t dampen the spirits of the young talent on display with a goal fest once again the order of the day culminating in 14 goals scored over the 2 matches.

It was The Emmets that got off to a dream start going 1-1 up in the first 5 minutes with Matthew Marron and Ben Murtagh on target. Emyvale began to slowly make their presence felt by patiently building from defence with Adam Treanor and Evan McKenna registering points. Both sides were guilty of errors and missed goal chances with the first one by Charley Murtagh for Carrickmacross coming in the 11th minute .This was followed by a scoreless period as both sides once again rued missed chances but in dramatic fashion The Emmets’ lead was short lived as Emyvale went on a scoring spree in the last 4 minutes of the half scoring an unanswered 2-4 by  the on form Eoghan Campbell,Evan McKenna, Darragh Hughes and Harry Forde giving them a 3 point advantage by the halftime whistle on a scoreline of 2-4 to 2-1.

Having regrouped at the interval Carrickmacross made an energetic start to the second half with James Jones and Matthew Marron registering a point each in the first 5 minute period. Only a point separated the sides as Emyvale once again took control and pulled away comfortably scoring 2-4 without reply with the goals from captain Darragh Hughes and Harry Forde plus points once again from the inspirational captain Hughes plus Adam Treanor, Harry Hamill and Evan McKenna. Carrickmacross made a last gasp attempt to narrow the margin with points from Charley Murray and Ben Murtagh but the closing minutes of the game belonged to Emyvale’s 2 super subs Matthew Swift and Art Wood who between them bagged 1-4 on a final scoreline of Emyvale 5-11 Carrickmacross 2-5. Emyvale had done it – they had won 2 U13 titles in 2 days! Congratulations to the team and management !
Thanks to the Drumhowan Club for hosting the double header.