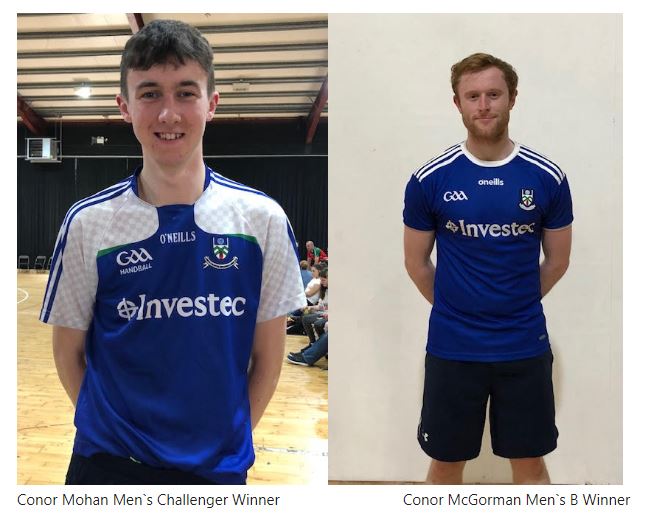 The Irish OneWall Nationals is the flagship event of the year in Irish handball. It was held in Breaffy House Resort Castlebar last weekend and almost 400 of Ireland’s best handballers met at Breaffy,all hoping to win a national title but only a few can. One man who proved he can,is Conor Mohan from Tydavnet Handball club. Conor has only taken up the OneWall code in the last few months but his hight, long reach and power make him a natural.This was his first ever national competition and was competing in Men’s Challenger. Over the weekend he defeated players from Galway, Belfast and Mayo and met Colm Walsh from Roscommon in the final. As the new kid on the block, Conor was very much the underdog but he immediately took control and was always the stronger player winning 17-11.
Conor O’Gorman from Carrick Handball club also had a good weekend winning the highly competitive Men’s B. Conor’s tough games were in the early rounds with his semi final going to a nail biting tiebreaker. In the final he met Evan Murphy from Broardford. Conor peaked at the right time and was never in trouble, he pushed his opponent left and right showcasing his spikes and fly kills winning 22-11.
Paul Cassidy from Tydavnet Handball club reaches the final of the Emerald Masters. On the back of being last years champion, Paul was seeded no. 1 and got a bye to the semi finals which he won comfortably, but came up against his old nemesis, John Herlihy from Cork. Paul was unable to repeat last years performance and lost to the Cork man 23-12.
“Monaghan County Handball”, would like to congratulate all the Monaghan players who competed over the weekend, Darren Doherty, Terry Mc Elvaney, Mark Mc Donnell, Eoghan Mc Ginnity, Aiden Cunningham, Aiden Mc Geogh, Ryan Mc Geogh, Conor O’Gorman, Conor Mohan, Paul Cassidy, Pete Larkin and Emile Mc Ginnity.