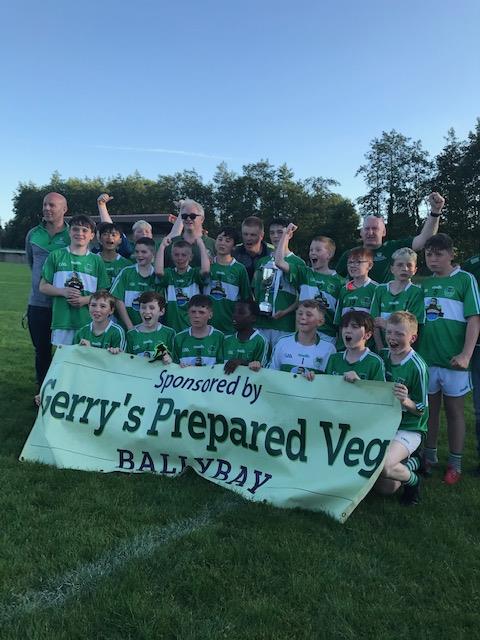 Wednesday, July 24: RFL Division 1B v Ballybay (Away) at 8pm

Monaghan Harps Lotto: Numbers 9, 17, 22 and 23. Jackpot of €2,600 not won. Residual prizes: €100 Cathy Duffy c/o Brian O’Sullivan (Hurling Club); €40 PJ Clerkin c/o Paddy Donnelly; €40 Lucy Hendry c/o Brian O’Sullivan (Hurling Club); €40 Mark Garvey c/o Ann Treanor. Jackpot for Sunday, July 21 is €2,700 and Helen and John Hahessy are on duty. Lotto draw takes place in our clubhouse every Sunday night. All welcome. Thanks to everyone for their support for our Lotto, which has now played a critical role in our club’s funding for 25 years.

U-13: Pride of place this week goes to our U-13s after last Saturday’s league finals. Our Division One team retained the Coyle Cup with a great win over Scotstown in a thriller in Tyholland. A bright start saw John McCrystal kick a brace of points and Jack Lynch get the opening goal, but Scotstown rallied to move ahead after 15 minutes. Jack added another two goals before half-time to keep our lads in contention and they changed ends a point down at 3-3 to 3-4. Jack and John added to their tallies soon after the restart, with Eoin Sheridan also chipping in with a point. A fourth goal from Jack Lynch proved key in swinging momentum in favour of the Harps, who hit the last 1-5 to win by 4-13 to 4-7.

This was a fine team effort, with every Harps player upping their performance in the second half. James Gunn was solid throughout in goals, behind a full-back line where Mark Lynch, Shea Corrigan made a series of important interceptions. Ethan McCaffrey grew into the game as it progressed, with Fergal Magee, Kyle Cooney, Orrin Doherty and Dónal Moran all sticking to their tasks well in the middle third. Jack Lynch gave a captain’s performance at midfield, while John McCrystal was a livewire up front and the energetic Daniel Alexis, Eoin Sheridan and Julian Coyle covered every blade of grass. Rhys McCaffrey also contributed well when brought on. Dara Mullin was unfortunately ruled out, but we wish him a speedy return to action.

Our Division Five side couldn’t get their hands on silverware in Drumhowan, despite a hard-working performance against a strong Castleblayney side. Lining out minus a few players who helped in qualifying for the Cup Final, our lads faced a tough task against table-toppers Blayney, who hit the front early on. The Harps grew into the game and points by Jack Kierans, Oisín Brannigan and Alex Kearns-Flynn saw them close the gap to four by half-time: 2-3 to 0-5. Blayney once again got a run on our lads in the early stages of the second half, but again the Harps rallied and they got the goals their efforts deserved through Joe Gunn and Rohann McKenna-Malocca. The likes of Jack Kierans, Dáire McKenna, John Sherry, Josh Cassidy and Diarmuid McGinnity continued to lead a spirited Harps effort to the end, but Blayney ran out worthy winners.

Well done to all our players and their mentors, including Adrian Gunn, James Corrigan, Fintan Grimes, Dermot Coyle and Martin Sheridan, for their efforts to date. Both of our U-13 teams now look forward to the championships, which are due to start later this month.

Race night: We will be hosting a fundraising ‘race night’ in our clubhouse on Friday, August 2. All support would be appreciated. More details to follow.

Seniors: We hosted Donaghmoyne in the Monaghan Electrical Intermediate Football League last Friday. This was a low-scoring game, where the visitors finished strongly to claim the two points after Liam Hahessy and Éimhín Morahan had been on target as we took a 0-5 to 0-3 half-time lead. We could only manage a brace of points from Liam during a frustrating second half, which saw Donaghmoyne edge the final result by 0-9 to 0-7.

Reserves: We had a 4-13 to 2-13 win against Killanny in the RFL Division 1B on Wednesday. This sets up a semi-final away to Ballybay next Wednesday at 8pm. Please support!

Minors: We edged Carrickmacross in the U-17 Football League Division One on Tuesday evening. Next Tuesday’s game is away to Latton. Our U-19s are due to play away to St. Patrick’s in Ballybay this Sunday at 2pm.

U-15: Our U-15 Division Four team hosted Truagh in a high-scoring shield semi-final last Friday. Truagh made the stronger start and were well worth their 3-4 to 1-6 half-time lead, despite scores from Oisín Reilly, Shay Kelly, Ali Galligan and Shane Moran keeping our lads in touch. Oisín added a second goal and a string of points after the restart and with Gregory O’Connell and Karol Parszywka also adding their names to the scoresheet, our lads battled their way back into the game. An exciting finish saw the teams end normal time level at 2-16 to 3-13, but Truagh’s goal-scoring ability made the difference in extra-time as they eventually progressed on a scoreline of 5-15 to 2-21. Hard luck to all involved after a good effort on the night by an understrength panel.

Our Division One team now await the shield final, which is due to be played next week. Keep an eye on club notes/online for fixture details.

U-11: Our U-11s have a bye in the Liam Stirrat Development League this weekend. Our annual Mick Farrell Tournament will take place in September. More details later.

County: Congratulations to Daragh Croarkin and the Monaghan minor footballers on last Sunday’s great win in the Ulster MFC Final.

Coaching: Our Saturday-morning coaching for our youngest players is up and running for 2019. The club is very fortunate to have a pool of hardworking and dedicated individuals who look after and coach these “early learners”. Our Saturday-morning activities are fun-filled and enjoyed by the children and are an equally rewarding and enjoyable experience to those who help make it happen, so we encourage anyone with an interest to get involved.

Pitches: Training schedules for all teams are in place. Coaches are asked to please ensure that gates and dressing rooms are locked and all equipment, bottles etc. is removed from the pitch after training sessions.

U-15: Our U-15 team contested the Táin Óg Division 4 Final at Breffni Park last Saturday. The lads were unlucky to come up against a stronger Warrenpoint side and lost by nine points. Despite the margin, we had strong performances from Oisín Connolly at wing-back and Cian Bradley in midfield. Our scorers on the day were Cian Bradley and Aidan McGeough. The Brady twins, James and Enda, also hurled well. Our captain Gary Treanor put in a stellar performance which saw him named as the stand-out player of the match. Thanks to Jim and his management team for their hard work over the course of the Táin Óg league.

Fundraiser: We will be bag-packing in Fleming’s this Friday and Saturday. All support is greatly appreciated!

Minors: Our minors received a walk-over from Scotstown in round two of the league last Thursday.

U-12s: Our U-12s defeated Killeevan by 5-11 to 2-7 last Thursday in the last round of the North-Monaghan league, finishing up with three wins out of five. Next up is the county championship, with divisions tbc .

Notes: Anyone who has news for inclusion in the club notes can send an email to pro.monaghanharps.monaghan@gaa.ie by Tuesday morning.