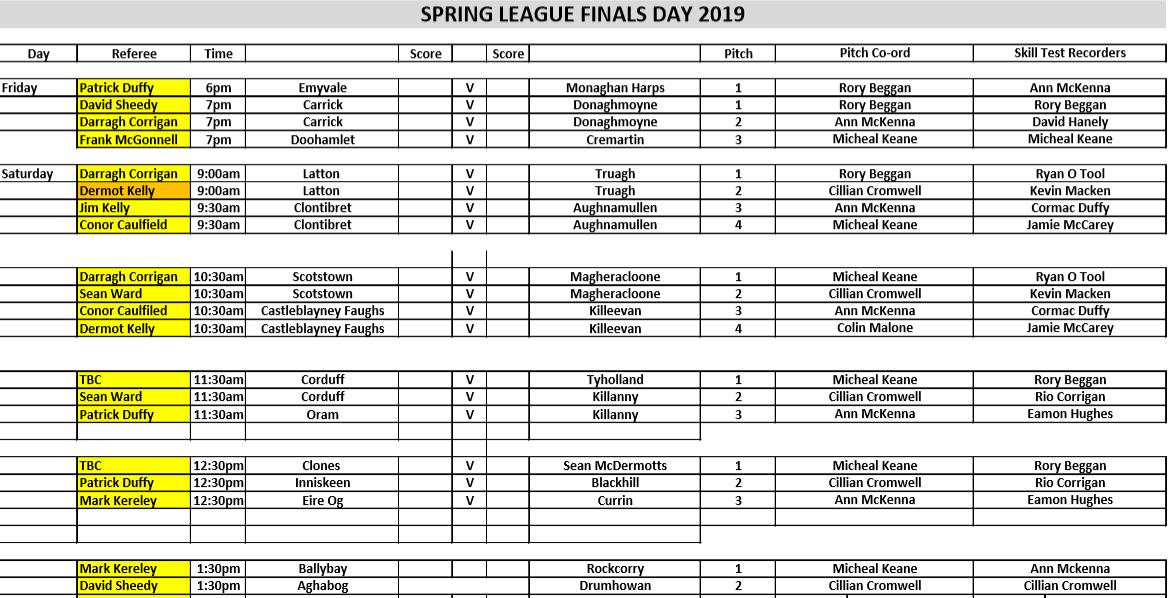 This weekend see’s the conclusion of the U11 Spring League which has been taking place in the county from the end of March. Depending on the zones which the clubs where placed in, they would have played at least 5 to 7 games over this period. The focus of the Spring League is  participation, skill development and fun. The rules have been slightly adopted in order to focus on certain areas of skill development for players taking part. For example , there is a non dominant period where players are encouraged to use their non dominant foot/hand. A white sock is worn to indicate this side. In addition to this a scoring zone is also devised on the pitch (20m out), if a score is kicked from out outside this area 2 points are awarded to there team.

Tonight the first set of games will take place in Cloghan from 6pm with 4 games taking place. Again tomorrow will see a total of 16 games with the first to start at 9am. In total 28 clubs with be participating in 20 games that are scheduled. Please see schedule above for more details of times & fixtures.

To continue with the focus of skill development for this age group, in all games played tonight and tomorrow,  there will be a skill team award up for grabs. The two skills that will be the key focus here is; Overhead catch/reach catch and Kick pass over 15m that goes straight to the chest. Designated personnel will monitor the skill competition in each game and an award will be presented to the team who achieves the highest score.

Monaghan Coaching & Games Development would like to wish all the players and mentors taking part the very best of luck and thank them for their support to date with this league.