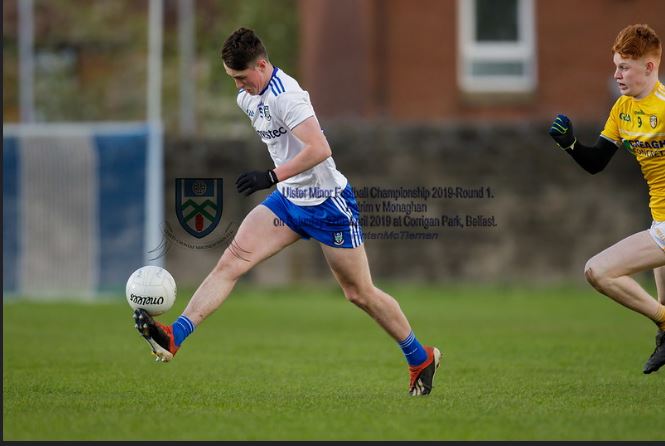 When Monaghan played Antrim in the Ulster minor football league earlier in the season they ran out comprehensive winners by all of twenty points but there was to be no repeat of that stroll in the park in Belfast last Saturday as the home side made life difficult for the reigning champions and had they converted a few of the turnovers they inflicted on Monaghan the result might well have been different.   Monaghan led at half time by 0-4 to 0-1 and started with more purpose in the 2nd half but the tactic of trying to get the ball in was once again adversely affected by the conditions which saw it carry beyond the confines of the field more then once. Daniel Mc Nicholl did reduce the arrears to 2 points, 37 minutes in, that score coming against the run of play as the Monaghan rear guard lapsed momentarily upon conceding a free and not picking out the midfielder who had stolen in behind and perhaps could have fashioned a goal. Jason Irwin fired over a brilliant effort from out near the side line 3 minutes later making wonderful use of the swirling wind but that was to be his last piece of action as a rash challenge following  the resultant kick out saw him pick up a second yellow card. It took a further 11 minutes for the next score to come and that was from a placed ball by Darragh Dempsey and the Latton man had a chance to put five between them a few moments later but his 20 metre free, once again became a victim of the conditions as it practically landed back at his feet after he had taken the kick. The biggest drama of this encounter was kept to the very last minute of the game when Antrim won a free right out on the sideline at the 45 meter and when the free was floated in, Joe Mc Nally managed to get a fist to the ball to place it past Joe Kirk into the back of the net. Before play could re-start, an off the ball incident saw Monaghan reduced to 13 players as substitute Declan Courtney received a straight red card, but the long whistle was to save the farney men as from the kick out, the 2 minutes of injury time that had been signalled had passed and it was with a sigh of relief that they escaped from Corrigan Park with a 1 point win. Monaghan now play Tyrone in the next round on Saturday May 11th at a Tyrone venue.