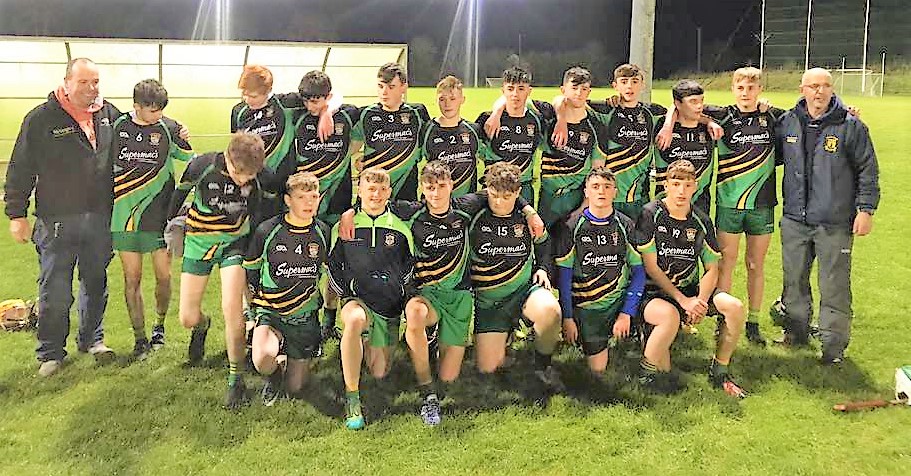 Four goals from Carrickmacross proved decisive as they lifted the U17 Division Hurling Title at the expense of Castleblayney  at Entekra Monaghan GAA Centre of Excellence, Cloghan last Tuesday night.

Played in windy but otherwise dry conditions, Carrick’s greater physicality was the difference in a contest that was quite entertaining to watch, despite what the scoreline might suggest.

Carrick set their stall out from the get go when Ciaran Guinan bundled in a goal in the first attack of the game, and it was five minutes before Blayney managed a response, courtesy of a David Irwin point from play.

On 11 minutes, Carrick assumed a strong position in the game when Shane Slevin struck a low shot into the bottom of the Blayney net for Carrick’s second goal, before following this up with another green flag just a minute later. Now Carrick lead 3-0 to 0-1 after 12 minutes.

David Irwin and Mikey Carville struck over frees for Blayney, either side of an Ethan O’Gorman point for Carrick, to reduce the gap to seven points after 25 minutes, although their task was already looking ominous, and they would have been further behind but for some wasteful Carrick shooting.

Joey Hughes and Ethan O’Gorman then traded white flags to leave the score at 3-2 to 0-4 in Carrick’s favour at the change of ends.

Five minutes into the second half, Mikey Carville hit another free over the bar to reduce the Blayney deficit to six points.

Two minutes later however, Carrick struck for their fourth goal through Jack Cassidy. His long range effort from midfield looped over the goalkeeper’s head and into the bottom of the net, and stretched the Carrick lead out to nine points.

Carville then proceeded to score two points in succession, from play and from a free, and with the margin down to seven with 15 minutes remaining, one might have suspected a comeback was on the cards.

This didn’t materialise though, as two frees from Shane Slevin and another from Joey Hughes ensured that Carrick ran out eight point winners in a match full of skill, passion and determination.