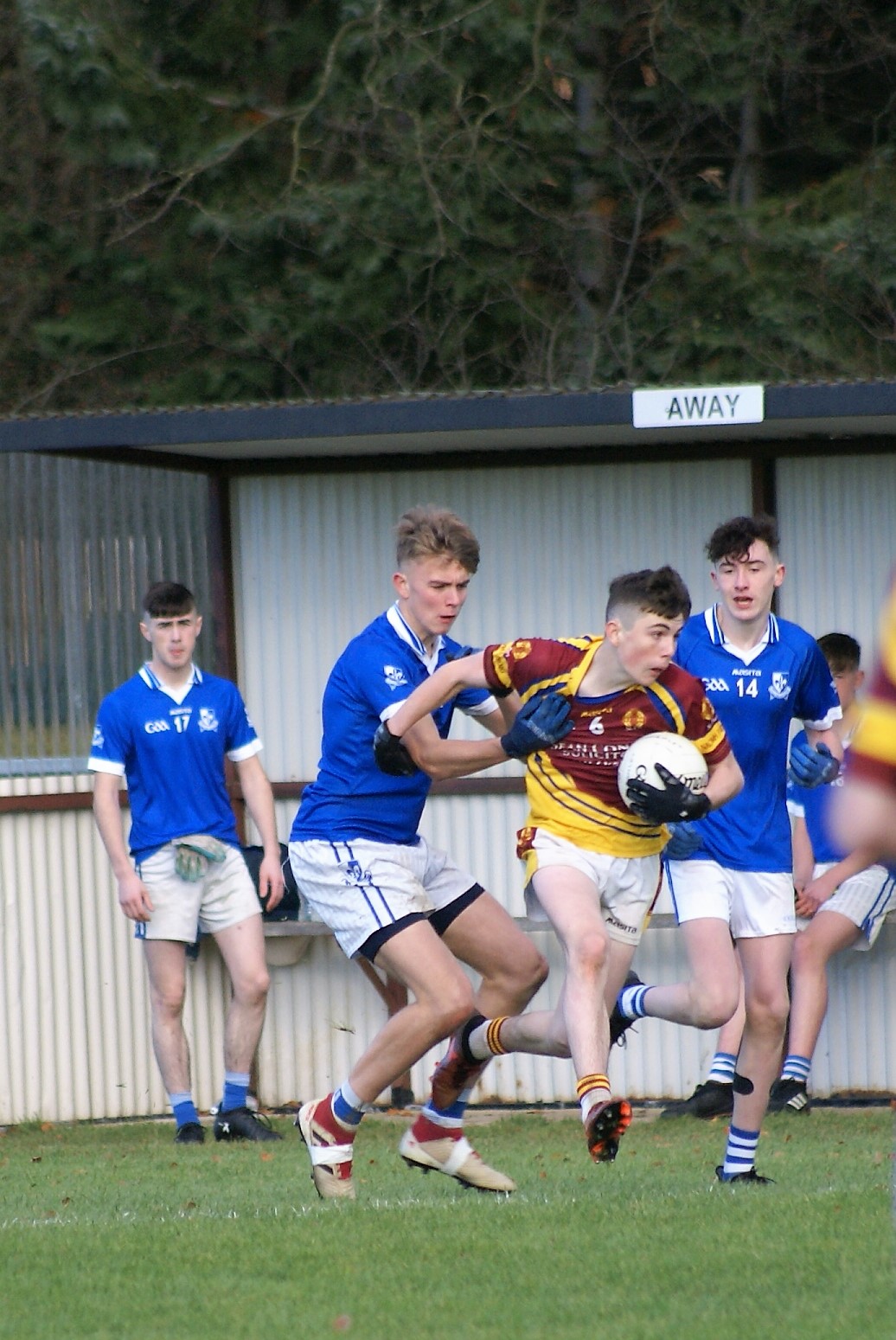 St Patrick’s emerged victorious after a tight, open game of football against Aughnamullen in this U17 Division 2 Football League Cup final, played in cold but sunny conditions in Blackhill last Sunday morning.
The final scoreline perhaps doesn’t suggest the way this match went, but in the closing stages, the combined forces of Ballybay and Drumhowan showed their class in the forward lines, which included plundering two important goals in the final 10 minutes.
There were no scores for the first six minutes of this match, although James Hannaway did pull off a fine save from St Patrick’s Joseph Duffy to deny the Tullycorbett men an early goal.
Eventually, it was Pat’s who got the scoreboard rolling with a neat point from the left foot of Gerard Quinn after 7 minutes. They then followed this up 2 minutes later when full back Ciaran Mc Kearney side footed a shot from the edge of the square to the bottom right corner of the net to give Pat’s a 1-1 to 0-0 lead.
Aughnamullen soon responded with a goal and a point of their own. The goal came first when county minor Joel Wilson tore through the middle of the Pat’s defence and crashed low through the keeper’s legs into the corner of the net. The match was then tied up by a Jason Duffy point after 12 minutes.
Things soon got even better for the Blues when Tristan Keenan landed two points in the space of a minute, before Barry Duffy crashed home his team’s second goal, to give Aughnamullen a 2-3 to 1-1 lead after 15 minutes.
Joseph Duffy gave Pat’s an important lifeline with a point on 20 minutes, and this was soon followed by a Julias Sniauksta free, to leave a goal between the sides after 22 minutes.
Moments later, Sniauksta found the net for Pat’s second goal, and now the teams were level again with seven minutes to go until half time.
Aughnamullen moved two points ahead again thanks to a close-in free from Joel Wilson and a 45 from Ryan Johnston.
Pat’s were to finish stronger in the closing stages of the first half, and a Darragh McCann goal and a Julias Sniauksta free had Pat’s 3-4 to 2-5 in front at the change of ends.

The exchanges at the start of the second half were tight and tense and no scores were yielded for the first four minutes.
Aodhan Brennan and Joel Wilson then traded points in the 35th and 39th minutes respectively to keep the margin at two points, before another Brennan free and a Sniauksta point had Pat’s 4 points in front for the first time after 48 minutes.
Another point by Wilson and one from Thristan Keenan reduced Aughnamullen’s arrears to 2 once more before Pat’s doubled their lead again with white flags from Aodhan Brennan and Joseph Duffy.
With eight minutes remaining, Pat’s forwards started to show their true colours. First, Aodhan Brennan ran in from the right to strike low to the net for his team’s fourth goal and effectively end the match as a contest.
Despite a Thristan Keenan point to reduce Aughnamullen’s deficit to six, Darragh McCann then ghosted in from the same wing and struck low under James Hannaway to the net for Pat’s 5th goal with a minute of normal time left.
A Julias Sniakusta score on the stroke of full time wrapped up a great 10 point win for a St Patrick’s team who were unlucky not to have won the Championship earlier in the month. They more than made up for it though with a wonderful display of open attacking football.