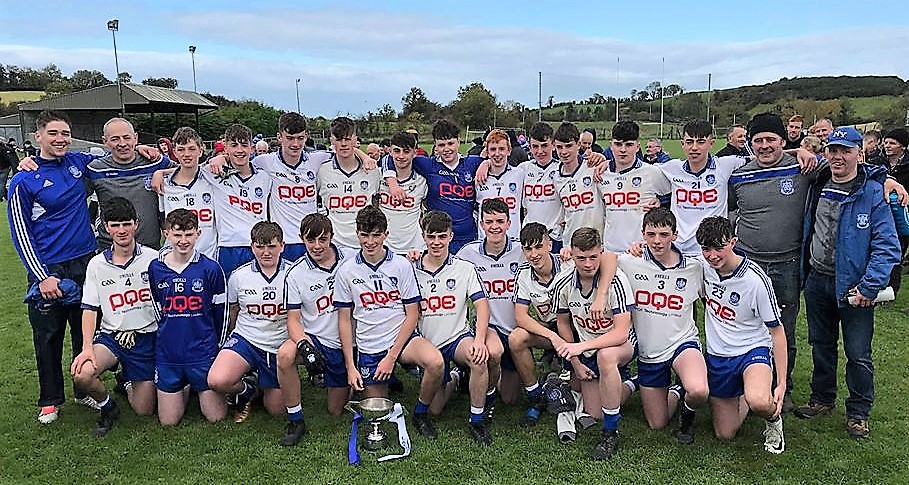 Latton were crowned Under 17 division 1 champions after a pulsating contest against Donaghmoyne that went to extra -time  in Drumhowan on Sunday. The O’Rahillys made a bright start and were 4 points up by the 15th minute of the first half thanks to the accuracy of Aaron Mulligan and a well taken goal from midfielder Eoin Duffy. However, Donaghmoyne managed to get a foothold in midfield lead by county minor Jordan Mc Garrell and the lively Liam Mc Donald and Josh Wilson in attack. The latter scoring a goal to gain parity before a Mc Donald strike just before half-time putting the Fontenoys 3 points ahead heading into the interval.

Donaghmoyne continued to set the pace in the second half and remarkably lead by 5 points with 12 minutes remaining, Mc Donald continuing to torment the Latton defence ably assisted by the direct running of Gavin Mc Skeane and Wilson. But Latton refused to accept defeat and began to dominate possession in the closing stages of normal time. The efficiency of full forward Darragh Dempsey and county minor star Mulligan ensured Latton would remain in  the contest. Indeed, it was the former who scored an inspirational point  worthy of any occasion 2 minutes into additional time that meant this game would require extra-time.

In the first period of extra-time both teams exchanged scores before Latton would strike for a hugely significant goal just before the change of ends from their roaming wing back Enda Mc Phillips. Latton were to apply a fatal blow to the Donaghmoyne challenge on the restart, from their centre back Conor Corrigan who planted a shot to the Fontenoy’s net. Despite,  Hugh Murnaghan registering the last

point of the day for the south Monaghan boys. Latton prevailed by 5 points to be crowned county under 17 champions.