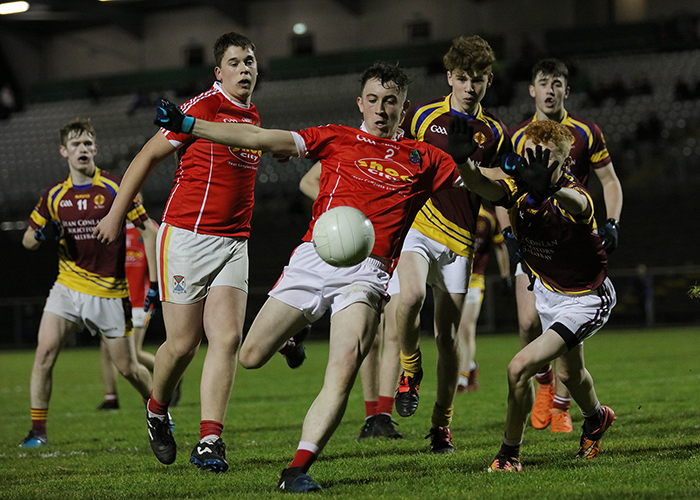 Any night that a team survives a dozen goal chances and still manages to come out on top by two points is a good one, and this was certainly the case for Clan na Gael.

In Castleblayney last (Wednesday) night, they fought back from six points down in the middle of the second half to win this U17 Division 2 Championship Final with a last gasp goal from defender Sean Callan against St Patrick’s.

They were helped in a big way by county minor star Jason Irwin, who kicked 1-7 on a night when his high fielding was also a big asset in a team display of guts and determination against the odds.

It was Irwin who opened the scoring with a free after two minutes, before St Patrick’s scored a brace to move a point in front by the 8th minute, including one from Dara McCann.

St Patrick’s then moved two points clear thanks to two frees by Julius, before Jason Irwin reduced the gap to a point by the 18th minute. At this point, St Patrick’s had missed three goal chances, thanks to some heroic Gaels defending.

Patrick McMahon now proceeded to kick two points without reply for Clan na Gael to move them from a point behind to one in front in first half stoppage time.

Although Aodhan Brennan brought the teams level again then at 5 points apiece, Jason Irwin and Peter McGinn kicked a point each to leave Clan na Gael 7-5 ahead at the interval.

The second half began with Julius Sniauksta halving St Patricks’ deficit with a point in the opening two minutes, before Aodhan Brennan brought the sides level with a free.

Julius Sniauksta then hit a goal and a point within seven minutes to leave his side seven points ahead midway through the second half, and seemingly on course for victory having broke their duck in front of goal.

Step forward Jason Irwin. The county minor proceeded to take this game by the scruff of the neck and drag his team back from the brink.

He began with a free on 46 minutes, followed by a long range speculative goal from the edge of the D with a low trajectory shot two minutes later. Two more points in the 54th and 55th minutes, and suddenly he had reduced his team’s deficit down to the minimum, 2-8 to 1-10.

Irwin then had two chances from frees to bring his side level, but he uncharacteristically missed both of them; and when Aodhan Brennan struck a free in the second minute of injury time to move St Patrick’s two points ahead again, it seemed as if Clan na Gael’s luck had finally run out.

However, Patrick McMahon reduced the margin to a point once more, five minutes into stoppage time, and there was still time for one last passage of play.

From the sideline, a long ball was sent into the square, it bounced between numerous players before falling into the arms of Clan na Gael defender Sean Callan. He spun round and struck a fierce shot that evaded Patrick’s goalkeeper Jaden Lee and crashed into the roof of the net.

The goal sparked wild celebrations in the stand among the Gael supporters from Toome and Oram, and when the final whistle was blown, everyone involved savoured an historic victory by the combined forces of two small clubs, against all the odds.