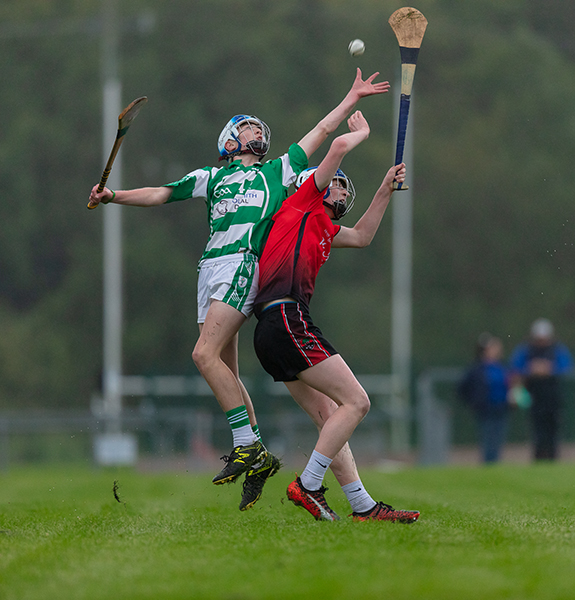 Four goals from versatile attacker Kean Farrelly propelled Cootehill Celtic to the U17 Hurling League Division 1 Shield title against Truagh in Cremartin last Thursday night.
Played in wet, slippery conditions, this match was a slow-burner for much of its duration, but it was lit up by fleeting moments of play from Farrelly and fellow attacker Conor Shalvey from frees.
The aforementioned Farrelly gave his side the best possible start with his first goal of the game, coming after 2 minutes. This was cancelled out however by a Ronan Boyle green flag for Truagh six minutes later.
Six more minutes elapsed before Donal Keappock got the first point of the match from play. On 17 minutes, Kean Farrelly put crucial daylight between the sides with a goal and a point inside 60 seconds, and suddenly Cootehill were five points in front after 17 minutes.
Emmett Walsh settled Truagh nerves with their second goal to reduce the margin to two just a short while later, but Farrelly then slotted over another point to extend Cootehill’s lead to three.
Truagh persevered for much of the first half and were rewarded with a levelling third goal on 27 minutes, coming for the second time from Walsh. Niall McKenna tagged on a free a minute later to put Truagh in front for the first time, a lead which they held until the change of ends.
Conor Shalvey scored his first free of the match at the start of the second half to bring the sides level again, before Kean Farelly caught a great pass inside and rifled the ball to the net for Cootehill’s third goal, to give them a three point lead.
This lead was maintained by Niall McKenna from a free for Truagh and Farrelly with his second point of the match.
On 37 minutes however, Truagh were level when McKenna landed Truagh’s fourth goal. His shot from distance missed everybody and fizzed under the stick of Cootehill keeper Shay Denning.
They then moved two points clear thanks to efforts from Ryan Boyle and Emmett Walsh. Conor Shalvey then halved this deficit with his second free of the game.
On 42 minutes, Kean Farrelly helped himself to a fourth goal when Truagh failed to clear their lines, and the Cootehill man bundled the sliotar into the net. A Conor Shalvey free then put the Celtics three points in front with 15 minutes remaining.
Matthew McKenna struck a neat point on 50 minutes to reduce the gap to two, but this was soon doubled to four when Conor Shalvey and Colin McCauley both split the posts inside a minute.
Emmett Walsh reduced the margin to a goal with 4 minutes left, but a swift response from Aaron Crowe restored Cootehill’s four point lead, one which they held onto until the full time whistle.