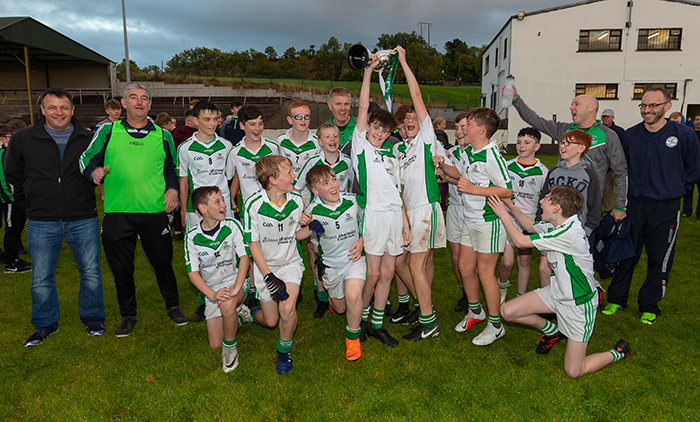 Do you believe in miracles? You will when I tell you about how Monaghan Harps overturned an 11 point half time deficit to defeat Carrickmacross in the U13 Division 1 Football League Cup Final in Doohamlet on Wednesday evening.

Played in slippery but dry conditions, the Emmetts dictated the play and scored the goals in the first half, before the roles were reversed in the second period to result in the most dramatic game of football this writer has ever witnessed.

The Harps opened the scoring with a goal from Seán Callan after two minutes, before an instant response came from Jack Carolan a minute later with a goal for Carrick to tie up the match.

A brace of points from Dualta Honney and a Jack McNally effort from play put Carrick three ahead before Seán Callan’s white flag cut the gap to two points after 10 minutes.

From this point until the end of the first half, Carrick turned the screw. First, Dualta Honney restored Carrick’s three point lead, before Niall Meehan thundered in a goal after 13 minutes to leave the Emmetts 2-4 to 1-1 ahead after 13 minutes.

Eoin O’Hanlon responded with a free for the Harps a minute later, but Carrick tagged on two further points through Jack Carolan from play, and a Niall Meehan free.

Cian Bradley kicked over a point to cut the Harps’ deficit to six, but Carrick then delivered what should have been the 1-2-Uniflu before half time.

Dualta Honney firstly pushed the Emmetts lead out to seven points with a white flag from play, and within a minute had the ball nestled in the net for Carrick’s third goal, and a 3-8 to 1-3 lead at the break, thanks to a Jack McNally point as well.

The second half showed no immediate signs of what was to happen. Jack McNally and Cian Bradley traded scores to keep the gap at 11 points, before Carrick’s Luke Povall and the Harps’ Shay Kelly done likewise two minutes later, 3-10 to 1-5 after 30 minutes.

From then on, the miracle began to unfold. Four points in succession, from frees by Fionán Ó Gallchóir and Eoin O’Hanlon, followed by Ó Gallchóir and Bradley efforts from play, brought the Harps to within seven points after 35 minutes.

Then Ó Gallchóir slotted the ball past Shane Carolan into the Carrick net for the Harps’ second goal of the match. From the next kick out, Jack Lynch stormed up the field and rifled home from close range to leave the Harps one point behind after 36 minutes, 3-10 to 3-9.

Carrickmacross looked like they had weathered the storm when Dualta Honney pointed a free, and Jack McNally found the top corner of the net, to leave them 4-11 to 3-9 up.

What Carrick done at one end however, the Harps done at the other. Fionán Ó Gallchóir cut the deficit to 4 with a point, before a long range low trajectory shot from Eoin O’Hanlon found the bottom corner of the net, and the Harps were only one in arrears again, 4-11 to 4-10.

Dualta Honney tagged on another point to double Carrick’s lead with six minutes remaining before the grandstand finish.

With time running out, the Harps needed another goal. First, Cian Bradley was put through after good link up play, and his shot was blocked out for a 45 by a brave Matthew Carolan, who was knocked out by the impact of the shot.

Next, Ethan Ballantine tried his luck, but his shot took two deflections across goal off two Carrick defenders and out for another 45.  Jack Lynch then brought the ball up the park once more and tried his luck. Third time lucky? No, the ball crashed off the crossbar!

It seemed Lady Luck had deserted the Harps, but with one last effort, Kelly finally found the onion bag, and his team and supporters went delirious.

Carrick still had time for one last roll of the dice, but Dualta Honney’s cross-field kick failed to find an Emmett, and the ball sailed harmlessly wide.

Moments later, the referee Raymond Malone called a halt to proceedings, crowning one of the all time great comebacks and wins for the Monaghan Harps club.

Now do you believe in miracles? If you still don’t, then you never will.