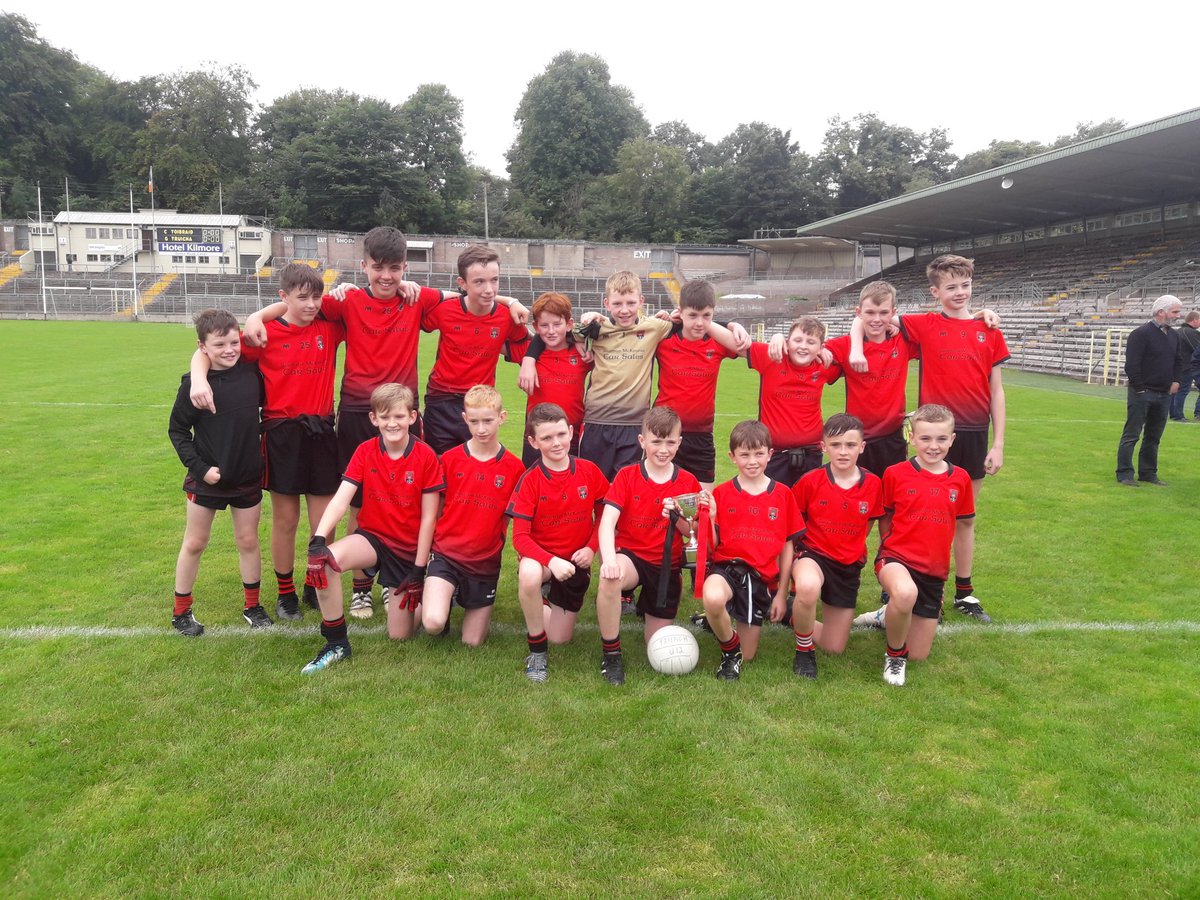 The giant full forward scored 2-5 including a 45, and created numerous goal chances for many of his teammates, a few of which were converted. He also fielded high ball after high ball, and picked out brilliant long range, sometimes diagonal passes that had the Clontibret defence in shreds.

The first score of the match was indeed that 45, a beautiful strike out of the hands going straight over the black spot. McKenna-Goodchild then added another from play to leave Truagh two points up after four minutes.

When Clontibret did settle, they scored three on the spin, with a brace from Caolan Cawley and another from Jack Brady leaving the O’Neills in front for the first time.

A Sean Woods point from play and a Harry Murphy free soon had Truagh in front again though, and on 16 minutes, Ronan O’Reilly had the ball in the net for the St Mellan’s boys’ first goal, following a driving run from the far wing.

Jack Brady responded with a point to keep Clontibret in contention, but by this point, McKenna-Goodchild was starting to have a big influence on proceedings.

In the space of two minutes, he set up John Treanor for two goals. The first came from catching a long ball and lay off to Treanor, who was put through one on one with Clontibret keeper Charlie Mone, and slammed home confidently to the net. The second goal came in similar fashion, and suddenly Truagh were 9 points ahead after 23 minutes, and so it remained until half time, 3-4 to 0-4.

McKenna-Goodchild immediately picked up in the second half where he left off in the first, scoring a fine point from long range.

Caolan Cawley then raced up through the Truagh defence for Clontibret, and rifled a low shot into the corner of the net. Suddenly, a come-back seemed to be on the cards.

Such thoughts were soon snuffed out by the boys in red though, with an Adam McCarey point and a third goal for John Treanor, set up once again by you know who (Goodchild).

McKenna-Goodchild then kicked another point from long range, to leave Truagh 4-7 to 1-4 ahead after 32 minutes.

The concession of the fourth goal prompted the Clontibret management to move Charlie Mone outfield and put Jack Brady in goals in his place, and Mone soon had a goal of his own, when he ran in from the far wing and chipped Truagh keep Dylan O’Reilly, and pulled Clontibret to 9 points behind.

McKenna-Goodchild used the right foot to swing over another long range point, before he had his first goal of the match following good build-up play by the Truagh team.

Harry Murphy kicked over another point, and then McKenna-Goodchild had his second goal, when he met a long range kick-pass and palmed the ball to the net beyond a helpless Jack Brady.

With the scores at 6-9 to 2-4 after 41 minutes, David McMahon managed to sneak in a consolation goal for Clontibret, but Sean Woods returned the compliment for Truagh four minutes later, finishing to the roof of the net with aplomb.

In the last five minutes, Clontibret tried valiantly for goals but to no avail, and McKenna-Goodchild was substituted from the field to a rapturous applause from the Truagh supporters.

The final whistle was soon blown, and Truagh were crowned champions, thanks in many ways to a superb performance from a giant who stood up tall for his team.