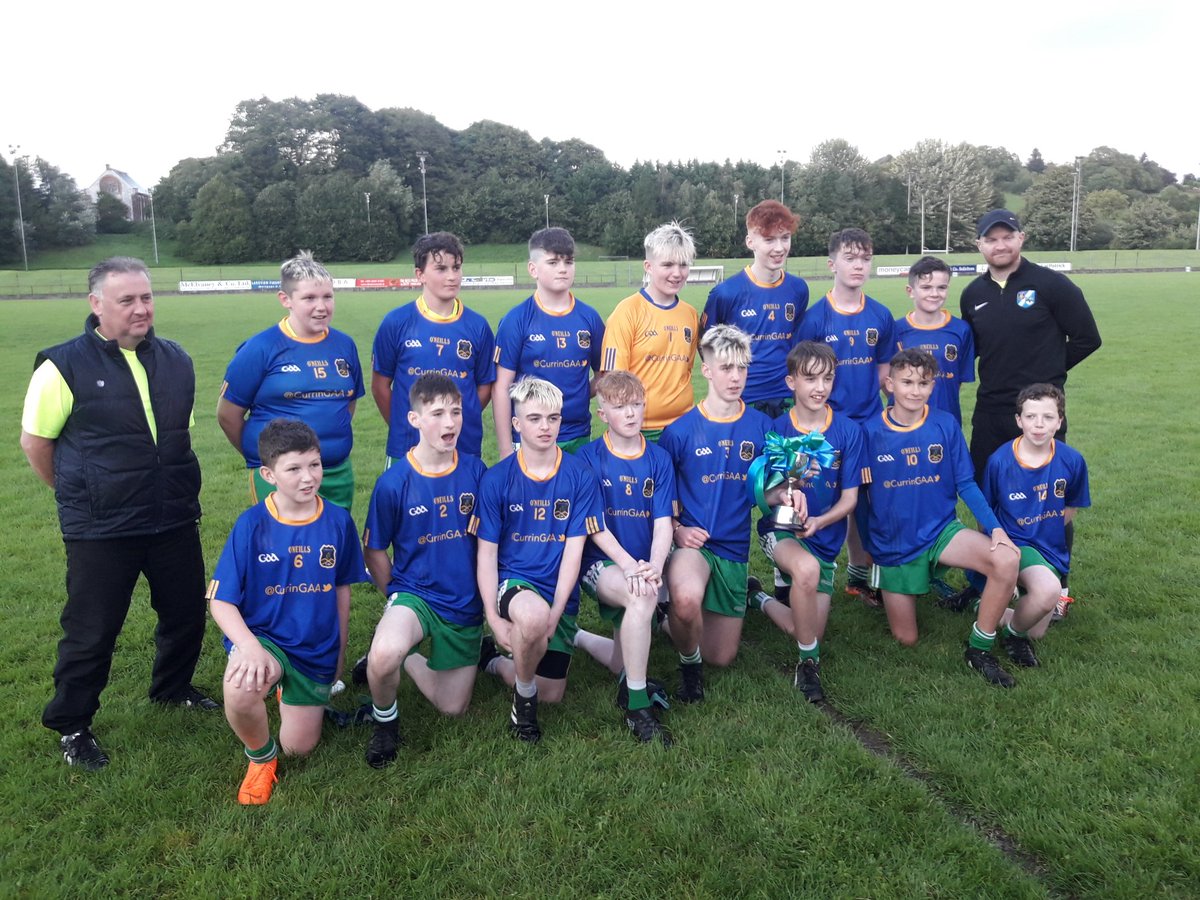 A more clinical Patrick Emmetts deservedly claimed the spoils in at times a scrappy U15 Division 2 League Shield Final against Scotstown in Monaghan Town on Thursday evening last.

Played in wet, slippery conditions, the men from Aghabog and Currin played with great pace and precision at times, but at the same time were victim to the difficult conditions.

Scotstown made the better start, thanks to a goal and a point from midfielder Mark McPhillips after 3 minutes. The Emmetts replied in similar vein however, with a point from Shane Duffy and a goal from Conor Leonard.

The Blues then went a point up twice, thanks to McPhillips and Ciaran McQuaid. The Emmetts drew level each time, with points from Tadhg Cosgrove and Cormac O’Hanlon.

O’Hanlon then put the Emmetts ahead for the first time with a free after 26 minutes, and went in at half time 1-4 to 1-3 to the good.

The leaders stretched their advantage to three points in the first five minutes of the second half, with Jack McQuaid and Paudie Gleeson both on target.

Scotstown soon began to mount a comeback, with Sean Treanor pointing a free and Mark McPhillips raising his third white flag of the evening, to reduce the margin to a single point 11 minutes into the second half.

From the next attack, Scotstown were awarded a penalty for a pull-down in the box. McPhillips made no mistake from the spot, and the Blues were back in front by two, 2-5 to 1-6.

Patrick Emmetts weren’t deterred though, and from the next kick-out they worked the ball up to the influential Cormac O’Hanlon, and he blasted into the net from close range, putting his side back in front again.

Half-time sub Cathal Caulfield replied with a fine point from distance off the left foot, and a well worked effort from James McElwain saw Scotstown back in the lead again with 14 minutes left.

The Emmetts split the uprights twice to go in front once more, Paudie Gleeson slotting over a close-in free and Aidan Leonard finding the range.

A further brace from Cathal Caulfield and Mark McPhillips however saw Scotstown seize the initiative yet again with 8 minutes left, and they stretched their lead further through a Glen Treanor point to leave the scores 2-10 to 2-8 in favour of Scotstown with 7 minutes left.

Two minutes later though, Patrick Emmetts worked the ball forward, and long drive in was punched to the net by Aidan Leonard, to leave his side a point in front once more. Paudie Gleeson doubled this lead when he seized upon a poor Scotstown kick-out, and the Emmetts had the winning look about them with time almost up.

Mark McPhillips clawed a point back from a close in free at the start of injury time, and soon was awarded a long free in with a chance to draw the match and bring it to extra time.

However, his effort fell short of the target, and Patrick Emmetts greeted the full time whistle with joy moments later.