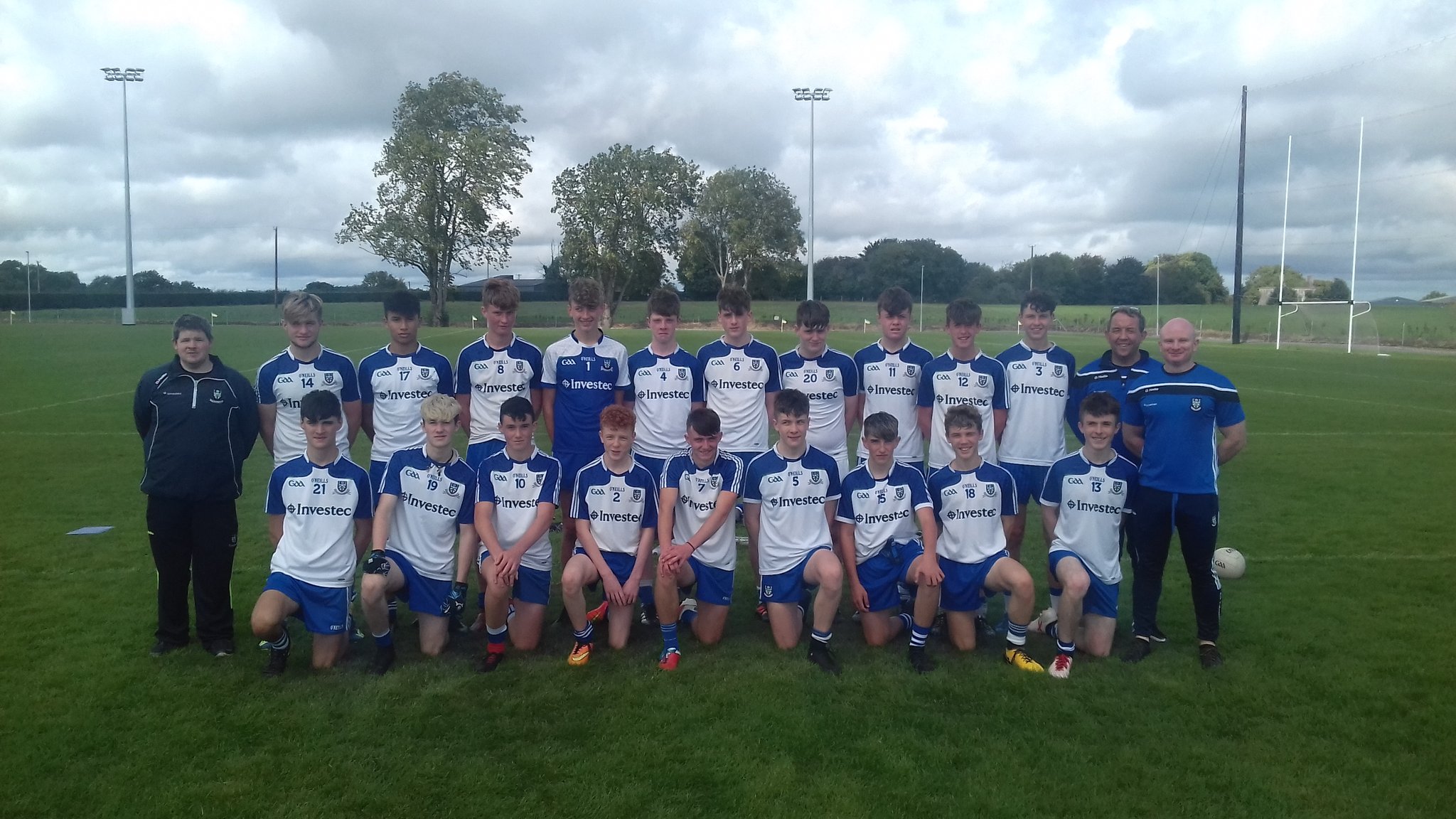 Monaghan U14 Development Squad
Monaghan U14 Development squad played Meath in a challenge match on Saturday 25th August. The match took place in Corduff GFC, as the ENTEKRA Monaghan GAA Centre of Excellence was hosting a National Hurling Blitz on the same day.
Both counties had two teams playing. Monaghan 1 played Meath 1 in the first game and at the same time Monaghan 2 played Meath 2. Both games lasted 40 minutes, 20 minutes a half.
The two Monaghan teams then switched pitches and played the other Meath team for 40 minutes.
It was a very worthwhile exercise for Monaghan, as 36 players got to play throughout the 2 games. We also got to look at a further 8 players on trial throughout the matches.
We would like to thank Meath for travelling to us, and providing us with competitive matches which will bring our players on in their development.
We would also like to thank Corduff GFC for the use of their excellent facilities.
Thanks to Martin Mc Ginn and Raymond Malone who refereed the games.
Monaghan U14 development squad will be training again on Saturday 8th September.
The players who lined out in this challenge match were as follows: Simon Geoghegan (Aughnamullen); Fionan Carolan, Sean Birdy, Kyle Cassidy, Darragh Mee (Carrick Emmetts); Martin Joyce, Kealan McMahon, Ultain McMahon, Ben Mallon, Joe Carey (Castleblayney Faughs); Myles Quigley, Ryan Nolan (Clones); Ciaran Doyle (Clontibret); Ciaran Brannigan, Phillip McNally, Daithi Shevlin (Cremartin); Christopher Collier (Donaghmoyne); David McGinn (Doohamlet); Dylan Sherry (Emyvale); Cian Burns, John Gartlan, Cillian McGahon (Killanny); Ethan Graham (Killeevan); Kian Duffy, Mark McCahey, Oisin Byrne, Patrick Farrelly, Anton Smyth (Magheracloone); Josh Brannigan, Aaron Reilly (Rockcorry); Dylan McPhillips, Darragh McDwyer, Caolain Foy (Scotstown); Tom McMahon, Joesph McMahon (Toome); Cillian Hackett (Truagh) Monaghan U15 Development Squad
The Monaghan U15 Development Squad took part in the recent Adam Mangan Tournament.
The first round of this competition took place at the ENTEKRA Monaghan GAA Centre of Excellence with Derry and Sligo providing the opposition. These matches were played in very wet and rainy conditions, with this providing all the players with an added challenge to contend with. Despite being down a number of players due to holidays, the squad put their shoulder to the wheel and competed well throughout.
Following on from the first round of fixtures, the squad were entered into the Shield section of this competition. We then travelled to Offaly to play both Kildare and Roscommon. With a depleted squad, due to players having club commitments and injuries, the squad showed great character and came through the two matches with two wins. This meant that the squad had qualified for the shield final.
With the best interests of the players in mind, and upcoming club finals due to be played in Monaghan the following week, we decided to concede the final game.
The squad was as follows: Darragh Croarkin, Tiernan O’Rourke, Liam Conway, Nathan Lavery, Shay Cooney (Monaghan Harps); Rio Corrigan, Luke Aughey (Emyvale); Mark McPhillips (Scotstown); Stephen O’Rourke, Jack McMenimen, Flynn Holland (Carrick Emmetts); Daniel McCaghey (Magheracloone; Ryan Duffy (Latton); Adam McSkeane, Allan O’Reilly (Iniskeen) Lewis McElwain (Truagh); Paudie Heavin (Castleblayney); Conor Ruxton (Corduff) Tomas McSkeane (Ballybay); Kian Clerkin (Clones) Monaghan U14 Hurling Squad
On Saturday last our U14 hurling development squad took part in the National Hurling Blitz which was held in Cloghan.
Our U 14’s were in action in the group stages against teams from  Louth and Derry.
The squad competed well against both Louth and Derry, and were unfortunate in both cases to come out on the wrong end of the result. These results meant Monaghan were now through to the Plate Semi-Final where they faced Fermanagh.
Monaghan were excellent in the first 10 minutes and played with great confidence in what was a good competitive match. In the second half the balance of the game shifted with Fermanagh finishing strong and winning out the game and progressing to the final.
Monaghan had excellent performances on the day from Cian Bradley at centre forward who really drove forward at every opportunity and assisted well by Oisin Connolly and Henry Kelly. Jack McDonald and Shane Tierney held the defence together and had a busy time against two physical teams.
The squad as a whole was depleted of a number of players due to holidays and injuries, however they fought bravely throughout the day and showed great commitment. The majority of the squad are under age again in 2019 which offers great encouragement and we look forward to further developing their skills.
Monaghan Coaching and Games would like to thank all the players and parents for all the efforts throughout the year.
If you would like any information on our hurling development squads , please contact Aidan Morgan on 0870998036 or by e mail on aidan.morgan.gda.monaghan@gaa.ie