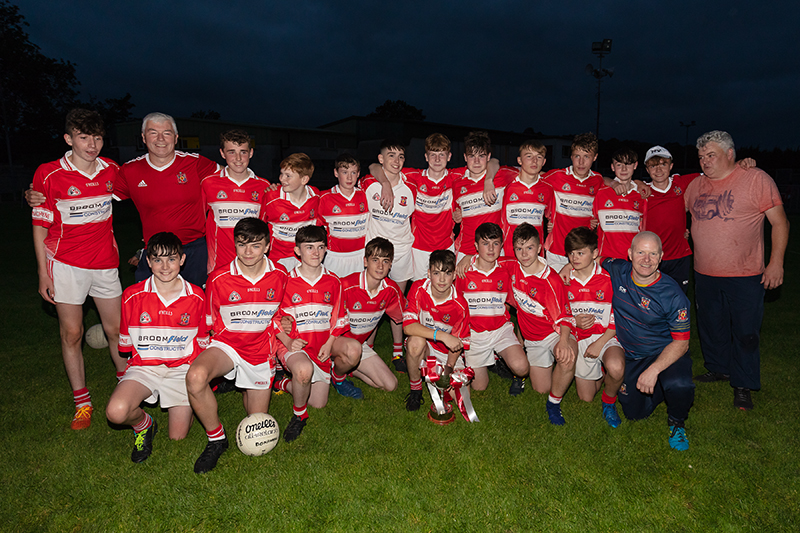 Donaghmoyne  captured the John Moen Cup in Páirc Mhic Eoin, Drumhowan on Tuesday 21st August but were made work for it and only pulled away in the second period of extra time.

The game started slowly  with Hugh Murnaghan and Jamie Coyle opening the scores respectively for Donaghmoyne and the Harps. Points were exchanged but scores were at a premium and at the end of the first quarter the Harps were ahead by a solitary point.  Jamie Coyle hit another point for the town side  but with under five minutes of the first half  left the scores were tied up at five points apiece.  Nathan Lavery got a crucial goal for the Harps but Donaghmoyne  replied with points of their own to leave the half time score Monaghan Harps 1-5 Donaghmoyne 0-7.

The second half opened with a Shay Cooney point but  Donaghmoyne kicked the next two to bring things all level once again. Gerry Finnegan then scored a goal that was deflected at the last second to cause Karol Parszywka trouble on what should have been a regular goal line catch.  The north Monaghan side weren’t for quitting and points from Shay Cooney and Nathan Lavery  left it at  tied at 1-9 each entering the final ten.  2 further points each meant extra time was needed.

Hugh Murnaghan added further points to Donaghmoyne’s tally to leave them with a 2 point lead at the interval and with many of the Harps players’ cramping  the Harps were struggling. Despite this they kicked the first point of the 2nd half but that was their final score with Donaghmoyne scoring a further 1-2, the goal coming from a penalty  to leave the full time score   2-15  to 1-12.