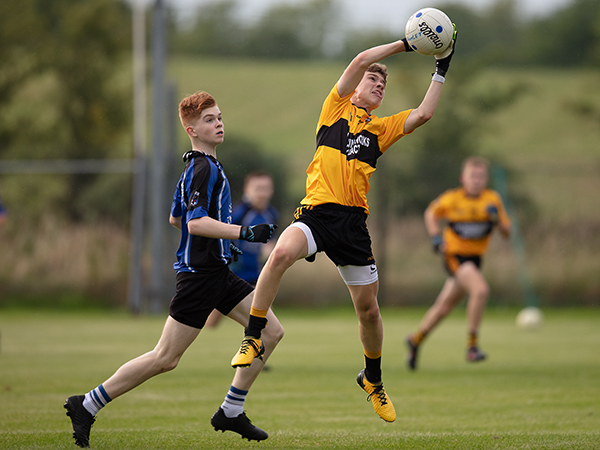 The 2018 season has served up some super juvenile football and the Manor Farm U15 Division 3 Championship Final last Friday between Corduff and Doohamlet proved to be a cracker . Both  side’s work  rate and intensity were evenly matched and having gone level 6 times throughout the match nothing separated the sides until the final whistle when Corduff clinched victory.
It was Corduff’s Diarmuid Marron , the game’s top scorer who opened the scoring registering 1-01 while a strong Corduff defence  kept Doohamlet scoreless until the 6th  minute when Tommie Duffy got them on the scoreboard followed by a point from Dylan McKenna.
Corduff continued to maintain the lead with another point from Darren Mc Nally  while at the other end Doohamlet responded with scores from Shane McBennett, Dylan Duffy and Eoin Coleman to level things for the first time 1-02 to 0-5.
Diarmuid Marron and Eoin Coleman then traded points with Eoin netting Doohanlet’s first goal in the 23rd minute  putting them ahead 1-03 to 1-06. Diarmuid Marron continued to add to his personal tally by converting 3 unanswered frees to level things for the 2nd   time 1-06 each. Darren McNally then added Corduff’s final point of the first half. Corduff’s defence kept Doohamlet under control until the 30th minute when Dylan Duffy registered another point for his side and by the interval the sides were level again for the 3rd  time on 1-07 each.
After the restart Doohamlet took control with the first score from a 45 by Ciaran Markey while their tight defence kept Corduff scoreless until  Diarmuid Marron who was now on fire found the net for his second goal of the match. Points from Doohamlet’s Eoin Coleman and Dylan McKenna levelled affairs for the 4th  time 2-07 to 1-10 respectively.
With the game still in the balance both sides smashed home a  goal  in the 10th minute , the first one off the boot of Corduff’s Darren McNally and the second one of the boot of Doohamlet’s Tommy Duffy to go level yet again for the 5th time 3-07 to 2-10 . There then followed a lean period with both sides being denied scores by the opposition until Eoin Coleman and Diarmuid Marron both converted frees going level for the 6th and last time  3-08 to 2-11.
Now entering the final stages of the match with both teams keeping an eye on the prize it was all to play for when Corduff’s hugely influential captain Diarmuid Marron netted for his 3rd goal of the match.  Corduff now ahead by a goal were kept scoreless for the closing minutes of the game as converted frees by Doohamlet’s Eddie Coleman and Ciaran Markey narrowed the margin to the minimun . As injury time approached a late rally from both sides produced a point by Conor Ruxton and Dylan McKenna.
Corduff defending a 1 point advantage dug deep in injury time to deny Doohamlet any more scores and were crowned champions on a final score line of Corduff 4-09 to 2-14.
Congratulations to both sides on a superb contest keeping the supporters on edge until the final whistle.
Corduff: Ryan Walsh, Eoin Hand, Padraig Hand, Conor McEnaney, Andrew Collins, Conor Ruxton 0-1 Danny Robinson, Tadgh Hegarty, Diarmuid Marron3-06 ( 5f ) Josh Smyth and Darren McNally 1-02.
Subs: Michael Pinnear for Padraig Hand, Keelin Cunningham for Josh Smyth, Jack Mohan for Tadgh Hegarty, Sean McMonagle for  Keelin Cunningham and Connla Burns.
Doohamlet:Nathan Casey, David McGinn, Mark Burns, Tommy Duffy 1-1  Oran McCormack, Dylan McKenna 0-2,
Ciaran Markey 0-2 (1f , 1-45) Eoin Coleman 1-4 (3f) ,Eddie Coleman 0-1 (1f)  Dylan Duffy 0-3 Shane Mc Bennett 0-1
Subs: Mattie Duffy for Shane McBennett, Shane Mc Bennett for Mark Burns (Black card) and Mackenesy O’ Connor