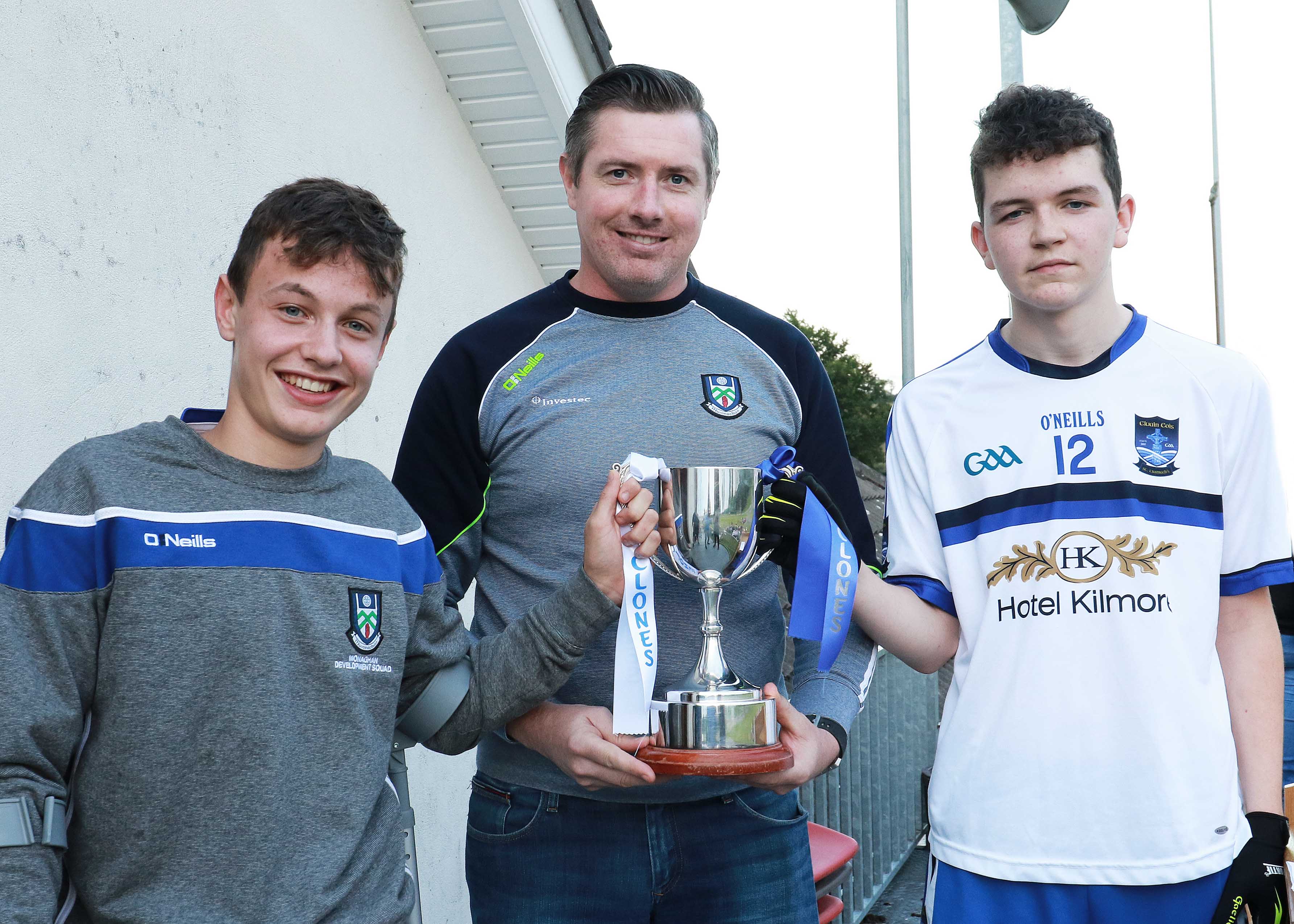 Clones U15s came out on top of a nine goal bonanza in the Manor Farm U15 Division 2 Championship Final against Scotstown in sun-drenched Emyvale last Thursday night, a game that required two periods of extra time to settle the contest.

The match was played at a frenetic pace throughout, and began with Scotstown taking a 3 points to 1 lead after 15 minutes, thanks to a hat-trick of white flags from their captain Mark McPhillips.

Ryan Nolan was doing the business for Clones at the other end, with his own hat-trick of points keeping his team in touch.

It was then that Clones landed the first goal of the game, courtesy of Conor McElwain before half time. On the resumption, Clones quickly plundered their second major, thanks to Diarmuid McElvaney.

The border boys now led by eight points, 2-3 to 0-4, and looked to have the game sewn up. It was then however that the contest exploded into life.

Seven minutes into the second half and Scotstown’s Sean Treanor found the net for the Blues to reduce their arrears to 2-6 to 1-4. A minute later, and Charlie Mohan landed their second green flag, and now only trailed by two.

Following a point then by Glen Treanor, Scotstown amazingly took the lead with their third goal following a driving run by Mark McPhillips.

Five minutes later, Clones were back in front again with their third goal from Ryan Nolan. Two minutes after that and Nolan had bagged himself another major and Clones were now four points ahead again, 18 minutes into the second half.

From there on, it looked like Clones had finally weathered the storm, but into injury time, Cathal Caulfield buried Scotstown’s fourth goal to send their supporters into raptures.

Mark McPhillips had one last chance to win it for the Blues from a free in normal time, but he was off target and the game finished level, 4-7 to 4-7. Two 7-minute periods of extra time would now be required to separate the sides.

James McElwain put Scotstown in front with a point in the first minute of extra time, only for Ryan Nolan to equalise two minutes later.

On the stroke of half time, Kian Clerkin put Clones a point ahead to leave the scores 4-9 to 4-8.

In the second period, Ryan Nolan extended the lead for Clones to two points with a fine score from play.

From there, they largely controlled the game before Mark McPhillips landed another point for Scotstown near the end to leave one point between the sides once more.

Just when it seemed like Scotstown might have forced a replay, Clones finally emerged on top of this titanic battle with a last minute goal from James McCabe, to cue scenes of euphoria among the Clones faithful. The Clones U15 team and mentors after winning the U15 Division 2 Championship final in extra time against Scotstown in Tully, Emyvale, on 26/07/2018. Pic: Peadar McMahon