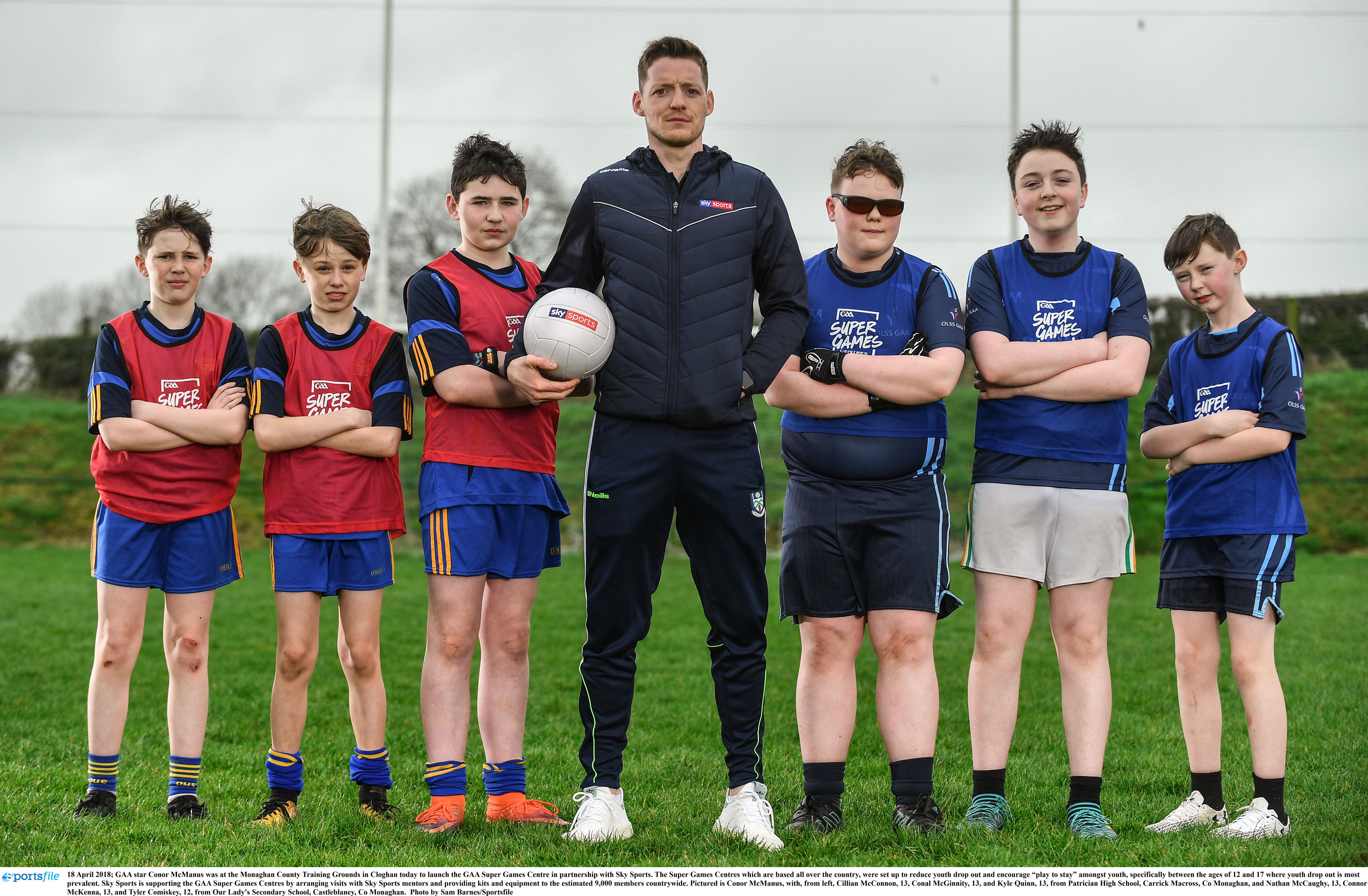 18 April 2018; GAA star Conor McManus was at the Monaghan County Training Grounds in Cloghan today to launch the GAA Super Games Centre in partnership with Sky Sports. The Super Games Centres which are based all over the country, were set up to reduce youth drop out and encourage play to stay amongst youth, specifically between the ages of 12 and 17 where youth drop out is most prevalent. Sky Sports is supporting the GAA Super Games Centres by arranging visits with Sky Sports mentors and providing kits and equipment to the estimated 9,000 members countrywide. Pictured is Conor McManus, with, from left, Cillian McConnon, 13, Conal McGinnity, 13, and Kyle Quinn, 13, from Patrician High School, Carrick Macross, Co Monaghan, and Nathan McCaughy, 13, Connor McKenna, 13, and Tyler Comiskey, 12, from Our Lady's Secondary School, Castleblaney, Co Monaghan. Photo by Sam Barnes/Sportsfile

The Super Games Centre programme has been rolled out in these 3 schools. The Super Games Centre consists of players that are not involved with their school teams. The players take part in conditioned games during lunch time. The players get the chance to play the game, while there is little coaching going on. The players’ coach themselves through the game. The programme caters for all players of different abilities; some of these players may not even be involved with a club.

Through the programme all players get to play and enjoy the game they love. Some players progress on to their school team and get the chance to represent their school. Others who are not attached to a club end up joining a club.

The day itself in Cloghan was very much enjoyed by all involved. The day started with the Sky Sports cameras filming the players arriving in their school buses. The players got to take part in a Questions and Answers session with the Super Games Centre Ambassador Conor Mc Manus. The players then got team pictures took with Conor. The blitz then started, with our ambassador Conor refereeing the first game and providing advice for the young players throughout the game. Conor then talked to both teams at half time and give them some positive feedback on their performance. A player from each school got interviewed by the Sky Sports crew, to give their feedback on the Super Games Centre Programme.

The day was a great success and very much enjoyed by everybody that took part in the blitz.

A big Thank You goes to: