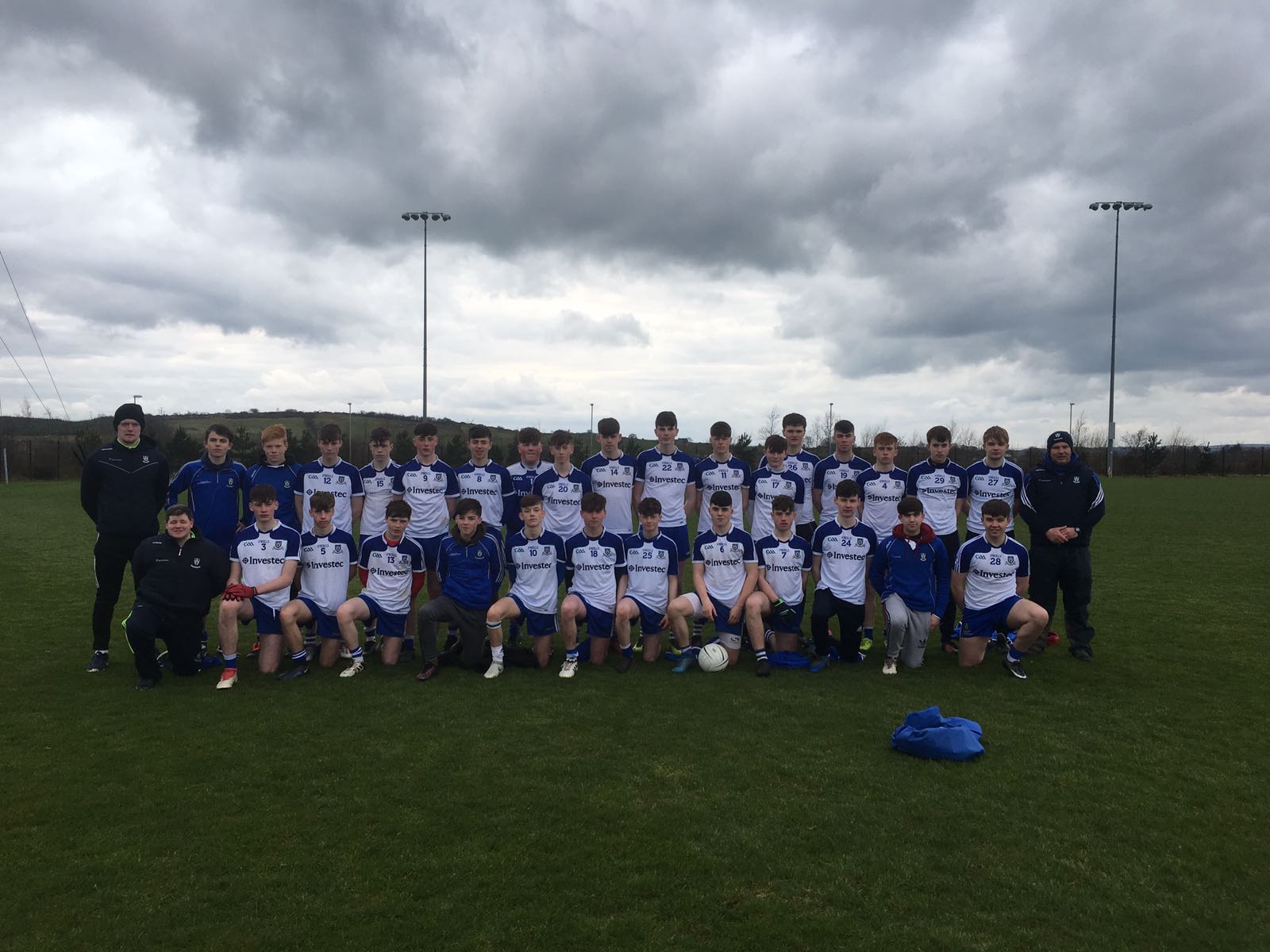 The Monaghan U16 Development Squad has progressed to the semi-final stage following a successful play-off series against Armagh, Antrim and Cavan on Saturday in Garvaghey, Co. Tyrone. They entered this stage having defeated Fermanagh (1-11 to 1-8) and drawn with Tyrone (0-16 each) in the Group stages, and lost out on an automatic Semi-Final position due to scoring difference.

The squad started off on Saturday facing Armagh at 11.30am. The weather stayed clear, and Monaghan hit the match on the front foot coming in at half-time with a 1-6 to 1 point lead. Declan Courtney put 1-1 on the scoreboard in the first half with Ben Ryan tacking on 3 points as well. Liam McDonald and Darragh Dempsey also raised white flags in this period.

Much of the same was to come in the second half, with Tiarnan Kearns introduction for Alistair Stewart also having a positive influence on the game with the former scoring 1-1. Eoin Duffy, Liam McDonald Jason Duffy, Jamie McPhillips and Ben Ryan all kept the umpires busy, as Monaghan were comfortable winners in the end on a scoreline of 2-12 to 0-3.

It was a great start to the day for the Monaghan Team, with a lot of the squad getting a run out in this fixture.

Next up was Antrim, with the winner’s of this match to go through to the play-off final, proved to be a very nervy encounter. Monaghan were buoyed by their performance in the previous encounter, and while the game itself was nip and tuck, Monaghan  came in at half-time with a 0-5 to 0-2 lead. 3 points from Darragh Dempsey and scores from Ben Ryan and Tiernan Kearns being the difference.

Antrim pressed hard in the second half, but resolute Monaghan defending kept Antrim to 1 point in this time. They showed great patience in attack also, and well-worked scores from Darragh Treanor, Shane Slevin and Darragh Dempsey resulted in a win for Monaghan on a score line of 0-8 to 0-3.

This result meant Monaghan now faced neighbours Cavan in the play-off final, with the winners progressing to the Buncrana Cup Semi-Finals. Monaghan played some free-flowing football in the first half, and at the end of the first half they led by 1-4 to 0-1. Tiernan Kearns rattled the back of the net, following some good work by Kyle Connollly and the points that followed were scored by Shane Slevin, Declan Courtney, Liam McDonald and Ben Ryan.

The second half saw Monaghan hit the ground running with two quick-fire goals scored by Liam McDonald and Tiernan Kearns (his second of the match). Michael Keenan came on in the second half and also raised a green flag. In the end, Monaghan ran out convincing winners on a scoreline of 4-6 to 1-5.

Overall, this was a great achievement by the squad to reach the semi-final. Ciaran O’Reilly was untested for the most part but found Monaghan men time and time again with his restarts. The defence held firm at various stages throughout the day with Cian Maguire, Eoin Duffy and Kyle Connolly leading a tight, battling defence. Darragh Treanor, Shane Slevin and Alistair Stewart competed well at midfield. Ben Ryan and Declan Courtney led the charge from the front, and were ably assisted by Jason Duffy, Liam McDonald, Tiernan Kearns and Darragh Dempsey.

Everyone who travelled and who was fit to play, got game time on a hugely successful day for the squad, and everyone played their part.

Thanks to Michael Treanor who helped out with Physio on the day, and also to Joe McDonnell who was kitman, and who looked after the equipment on the day.