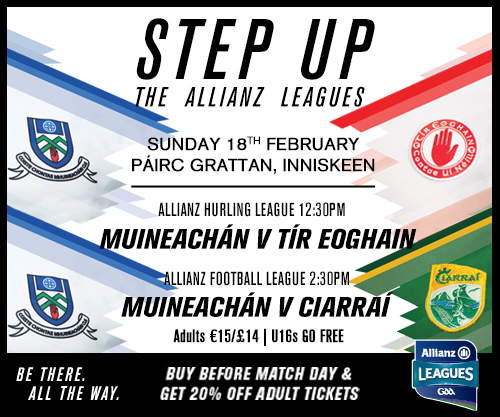 Monaghan will bid to make it back-to-back wins in the Allianz NFL when they host Kerry in their rescheduled fixture at Inniskeen on Sunday.

Having been edged out at home to Mayo in round one, Monaghan got off the mark in another exciting finish at the expense of Kildare. Kerry bring some impressive form into this game after their new-look side defeated Donegal and Mayo. Monaghan have managed to win in Kerry in 2014 and 2016, although they have fallen short of turning the Kingdom over on home soil since returning to the top flight.

Monaghan have an unchanged team named for this game, while Malachy O’Rourke has a list of experienced substitutes to call on, including Conor McManus (who made his first appearance of 2018 off the bench in Newbridge) and Ryan Wylie (who is available again after serving a one-match suspension). Injuries have ruled out Kerry trio Gavin Crowley, Seán O’Shea and David Clifford, with their places in the starting team going to Andrew Barry, Daithí Casey and Jack Savage. Both counties had players in action already this weekend, with Monaghan’s Conor McCarthy and Kerry trio Jack Barry, Barry O’Sullivan and Brian Ó Seanacháin helping UCD to Sigerson Cup success.

Monaghan will need the likes of Karl O’Connell, Fintan Kelly, Darren Hughes and Jack McCarron to lead the way, while Paul Geaney, Paul Murphy, Shane Enright and Stephen O’Brien are among the more established members of Éamonn Fitzmaurice’s starting XV.

Monaghan have started the league with a win over Longford and a draw against a fancied Roscommon side. Tyrone, who pipped Monaghan to a place in the Division 3A Final last year, have so far fallen to defeats against Warwickshire and Louth.

Trevor Hilliard can call on experienced players like Mark and Peter Treanor, Brian McGuigan, Brian Flanagan, Patrick Finnegan and the prolific Fergal Rafter, while young players like Conor Flynn and goalkeeper Patrick Bermingham have also made their mark. Tyrone’s talisman is Damian Casey (who has 0-21 to his name already), while Ryan McKernan, Aidan Kelly, Brendan Begley and Tiernan Morgan should also play key roles.

Monaghan’s ladies’ footballers also take on Kerry in a refixture a week after last Sunday’s postponements, with the teams agreeing to go to IT Blanchardstown in Dublin.

Monaghan are searching for their first points of the campaign after defeats against Galway and Cork, while Kerry bounced back from losing to their neighbours by beating Mayo last weekend.

Monaghan will need big performances from experienced players such as the McAnespies and the Courtneys, while Kerry can call on the likes of Sarah Houlihan, Louise Ní Mhuircheartaigh, Lorraine Scanlon, Aislinn Desmond and Aoife Geaney.