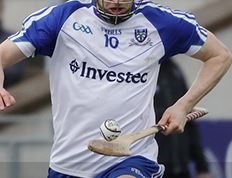 Monaghan’s unbeaten start in the Allianz NHL ended with a four-point defeat against Tyrone in Inniskeen on Sunday. A virtuoso performance by Damian Casey ultimately decided this close contest in favour of the visitors, who got their first win of the campaign on the board thanks to a goal in either half from their talisman.

Casey finished top scorer with 2-11, 9 of his points coming from frees, and while he fired over points from a range of distances and angles, he also demonstrated his predatory instincts as he pounced for 2 vital goals that ultimately proved the difference between the sides. His 1stgoal after 16 minutes of the 1st half helped Tyrone to a 1-7 to 0-8 half-time lead with the accuracy of Fergal Rafter, who finished top scorer for Monaghan with 12 points, 10 from frees, helping to keep the home side in touch.

Within 3 minutes of the resumption Casey pounced for his 2nd goal to put Tyrone 5 ahead and they always held a distinct advantage in the 2nd half with good defending and quick counter attacks but Monaghan’s cause not helped when they were reduced to 14 players with the dismissal of Patrick Finnegan as the game entered the final quarter. To their credit battled away gamely despite their numerical disadvantage but Tyrone were always that little bit sharper in both defence and attack with 2 late points in stoppage time seeing Monaghan reduce the deficit to 4 at the finish.

Monaghan are away to Warwickshire next Saturday.