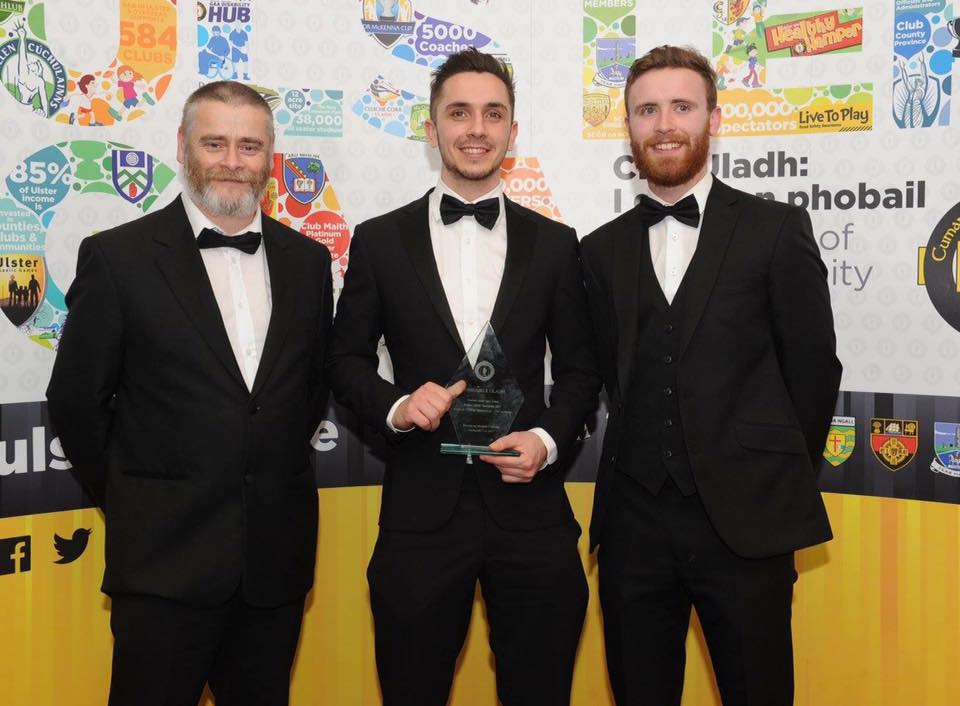 Representatives of Killeevan Sarsfields GAA Club made their way to the City Hotel in Derry on Friday 1st December past, having been nominated for the prestigious Ulster GAA Presidents Awards 2017. Having been shortlisted in the ‘Cultural Expression’ section the club were hopeful of bringing another award home to Páirc na Sáirséalaigh and with it the recognition of the valuable work being carried out by the Senior team, committee and supporters of Killeevan GAA.

In a packed suite on the banks of the river Foyle, the black-tie event got under way with GAA clubs for all over Ulster in the room. Refereeing awards and team awards were among the recipients of the honours. And then the category, for which Killeevan were nominated was called. Special merit was awarded to C.L.G. Ruairí Óg, Cushendall, Co. Antrim. But the main prize was awarded to Killeevan GAA for their efforts in promoting the Irish language in every aspect of the club’s work.

Senior player Gerard Graham was nominated to accept the award from Ulster GAA President Micheál Hasson on behalf of the Club. Speaking afterwards Senior team captain Iain McConnon expressed his delight at ‘being recognised, at the top table of Ulster GAA, for the great work carried by their club’.  Senior team player Gerard Graham, who collected the award stated ‘we’ve started something which benefits both our club and community, I look forward to continuing that to the benefit of both in the future’.

The award was given to Killeevan thanks to, among other things, their ‘bilingual club notes, Facebook post, signage, the connection with C.L.G. Ghaoth Dobhair at juvenile and now senior level, ranganna Gaeilge, Ciorcal Comhrá, the use of Irish at meetings, and club events and the decision of the Senior team to take part in the Ó Béarla go Gaeilge’ project where it’s hoped the club will be accepted to take part in Comórtas Peile na Gaeltachta next year.

It’s been a very busy year for the Killeevan club, huge developments around their ground, participation of their first ever Ladies Senior team in competition and of course all the work carried out at underage level. Their Irish language work has also kept them very busy and it’s something that they believe can lead to a revival in club fortunes across the board. Concluding Brian MacUaid says ‘We’ve always had a very positive attitude to Irish in Killeevan, however I wish to highlight, in particular the Senior team, who thanks to their commitment to working with the Ó Béarla go Gaeilge project has really been a great encouragement to the wider membership to use their Irish.  This is and will turn out to be, team and club building on a very effective scale.