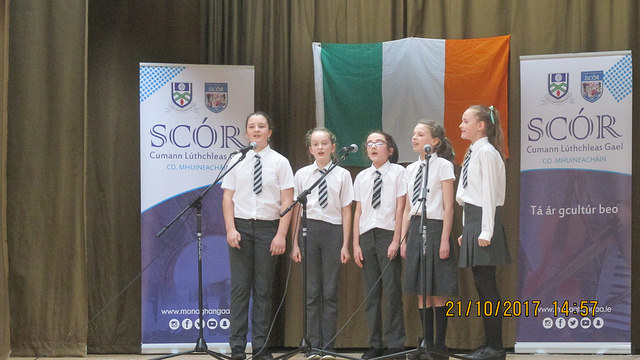 The Scór season opened on Saturday and what an afternoon was had  in the Clontibret Community Centre with Scór
na bPáistí before a large and enthusiastic audience. Children from 12   clubs all across the county treated the
audience to a fantastic evening of music, song and dance. There were 52 acts throughout the afternoon a great achievement for all in the County as not all Counties hold Scór na bPáistí .
Comhghairdeas to Stephan Mc Mahon  from Druim Shamhain  who was a very capable Fear an Tí for the afternoon. He kept the evening moving and was a delight to work with behind the scenes .  There was great help backstage who kept the afternoon running very smoothly the afternoon. Katie Boyle  from  Achadh Bog  sang  Amhrán na bhFiann.
The audience were exposed a host of dances, songs. recitations and tunes from the children around the County. The Tráth na gCeist  was quite a highlight of the evening with 14 teams who battled through the questions.
Mile Buiochas to Dessie Moen Cluain Tiobrad who made a guest appearance  on the night to present trophies to the  winners.
Well done to all the children involved on the night – they were all exceptional and credit to their
families and clubs. Special thanks go to the parents and mentors who prepared  the children for this event. The overall standard was very high and the adjudicators had a very difficult task in their deliberations. Yes there have to be winners but on behalf of the Coiste  comhghairdeas to all the children who participated on the night.
The results were as follows;

Photos of the night can be viewed at https://flic.kr/s/aHsm4QQ1Ch

Another reminder that The Acorn Life sponsored Scór na nÓg Competition (Under 17) County Final will be held in Threemilehouse on Saturday November 25th at 7pm. Competitions in Rince Foirne, Rince Seit, Solo Singing, Ballad Singing, Recitation, Group
Music and Drama .
Please email entries immediately to irishculturalofficer.monaghan@gaa.ie. Please state name of competitor, title of song/recitation etc and name of  GAA/LGFA club and numbers.
Tráth na gCeist
The Monaghan Scór na nÓg (under 17) and Scór Sinsir quiz will take on a separate night from the other Scór competition. Please can all clubs make that special effort and register your clubs interest in taking part in Tráth na gCeist by email to irishculturalofficer.monaghan@gaa.ie