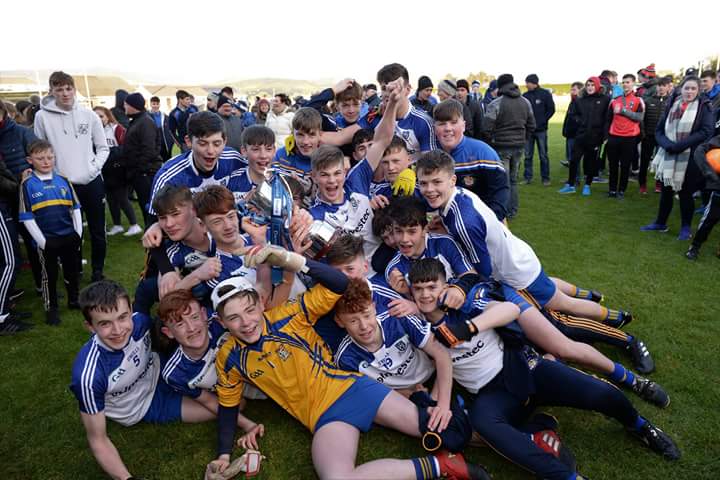 Patrician High School Carrickmacross captured the Danske Bank u15 ½ Brock Cup ‘A’ Schools for the first time in their history this year after a hard fought win against St Colman’s College Newry with a scoreline of 1-7 to 0-04. This committed group of players displayed tremendous skill and determination on route to the final with great wins over St Michaels Enniskillen, St Malachy’s Castlewellan, and a tough semi-final victory over St Patrick’s Maghera.

The entire squad trained hard from the beginning of the year and this was reflected in the performances over the year. Captain Ronan Grimes (Kilanny) led from the front throughout with other stand-out performances along the way from the likes of Jack McGeown, Donnach Swinburne (Carrick Emmets) Jack Doogan (Maghercloone) Shane Hanratty, Sean Jones (Inniskeen) Jordan McGarrell (Corduff).

Patrician High School would like to thank all coaches and staff for their work throughout the year. We would especially like to thank Colin Malone Monaghan County Development officer for his work with the team.

Over recent years Patrician High School has continued to build a formidable reputation in Ulster football, having recently returned to Mc Rory Cup football and on winning the U14 ½ Loch an Iuir Cup in October on a score line of  0-12   to St Eunan’s Letterkenny 1-5.

Patrician High Carrickmacross pulled away near the end of this exciting Dankse Bank Loch an Iúir final in Garvaghey, Co.Tyrone. Playing with Garreth Burns as a sweeper they shut off St Eunan’s Letterkenny’s route to goal time and again and were able to break effectively and keep the score-board ticking over.

Harry Corscadden and Darragh Flanagan were other towers of strength in defence while up front Liam McDonald was always a threat with his positional play and accuracy.

St Eunan’s started the second half well, but Patrician’s ability to break at speed helped them to a flurry of points from Liam McDonald, Darragh Povall and another defender Diarmuid Marron and they opened up a 0-11 to 1-4 lead.

Although St Eunan’s came back with a pointed free, St Eunan’s couldn’t add more to their total and, close to the end, Burns won possession inside his own 20 metre line. The ball was swiftly moved up the field for Callum Quigley to tap over an insurance point for the Monaghan side and kill off any lingering doubt there may have been about the result.

This year, the school returned to Mc Rory cup football for the first time in over a decade. They competed bravely in all group games and this was shown in tremendous second round win over competition favourites St Patrick’s College, Maghera. This bodes well for the future with the victorious Rannafast team of 2015 beginning their McRory campaign in 2017/2018.

See below a selection of photo’s from the winning teams and players.