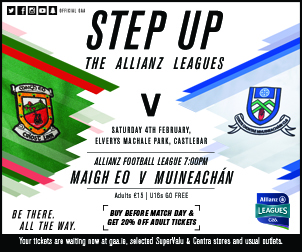 Monaghan start their Allianz NFL Division One campaign away to Mayo on Saturday evening.

Malachy O’Rourke’s side start their third consecutive year in the top flight against last year’s beaten All-Ireland finalists, who have held the edge in these counties’ last two meetings. Monaghan reached the semi-finals of the Bank of Ireland Dr. McKenna Cup, only to lose to Derry, while Mayo had two wins and one defeat with a much-changed panel in the Connacht FBD League.

There are no league debutants in the Monaghan team, which shows seven changes from their last outing a fortnight ago, although Conor Forde, James Mealiff, Brian Greenan, Mikey Murnaghan, Niall Kearns and Stephen Finnegan are all on a substitutes’ list that includes five of the 2016 Ulster Under-21 champions. The visitors will be hoping that an experienced starting team, featuring the likes of Conor McManus, the Hughes brothers and the Wylie siblings can get them off to a winning start. Dessie Mone, Vincent Corey, Jack McCarron and Dessie Ward miss out.

Mayo are set to be without Aidan and Séamus O’Shea, Lee Keegan, Brendan Harrison, Ger Cafferkey and Kevin Keane, among others, but Stephen Rochford can call on established stars such as Cillian and Diarmuid O’Connor, Keith Higgins, Andy Moran, Patrick Durcan and Kevin McLoughlin. Dónie Newcombe and Fergal Boland make their NFL debuts in a Mayo starting team that shows eight changes from October’s All-Ireland final replay.

Monaghan’s senior ladies are also up against Mayo: at St. Tiarnach’s Park on Sunday.

Monaghan fell to a low-scoring defeat away to Dublin in round one, while last year’s beaten league finalists Mayo were edged out by neighbours Galway. Monaghan will hope to be able to call on the likes of Ciara and Aoife McAnespie, Sharon and Cora Courtney, Gráinne McNally, Laura McEnaney and Cathriona McConnell from the team that regained the Ulster title and lost narrowly at the All-Ireland semi-final stage last year. Veteran top scorer Cora Staunton has returned to the Mayo side, along with others like Sarah Rowe, Yvonne Byrne and Martha Carter.

Under-21 Shamrock Cup Round One

Monaghan and Louth’s Under-21s will both be bidding for a second win in the space of week when they meet in the Shamrock Cup at Darver on Friday night.

Monaghan came from behind to hold Derry scoreless in the second half of their opening win last weekend, while Louth ran up an impressive tally in their defeat of Armagh. Louth started with a convincing 4-16 to 2-9 win over Armagh last Friday. Commitments to the county’s senior teams for this weekend’s first round of the Allianz National Football League will restrict the availability of some players, but Louth will hope to be able to call on the likes of Ryan Burns, Declan Maguire, Tadhg McEnaney, Matthew Corcoran and Dion Conlon. Dermot Gleeson, Stephen McCabe, Francis Maguire and Barry Kerr could feature prominently for Monaghan.