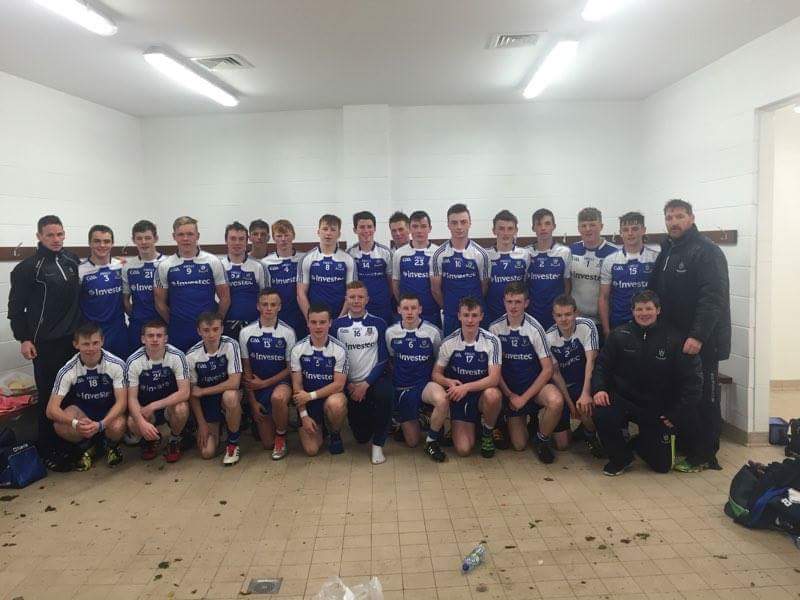 Last Saturday, the U16 Football Development Squad travelled to the Tyrone Training Grounds in Garvaghey to take part in the Ulster Buncrana Cup qualifiers. The six counties who had not qualified for the Buncrana Cup qualifiers after the Preliminary Round in May took part in the Qualifier Event. The six counties were drawn into two groups of three with the top two teams in each group playing off in a final to determine who would join the other three counties in the Buncrana Cup semi-finals at the start of August.  Monaghan were drawn in a group with Down and Tyrone.

In what can only be descried as terrible weather conditions, Monaghan, In their first game the team played Down. They adopted to the weather conditions the quickest and in the end they ran out comfortable winners on a score line of 2-10 to 1-05. After a short break, they took on Tyrone. This was a do or die game for both teams with the winners going onto to the final after Tyrone defeated Down In their first game as well.  The first half both teams were evenly matched with neither team giving an inch in pursuit of victory. As the second half of the game got under way, the game started to open up a bit, at this time Tyrone opened up a 2 point lead and things were not looking good for Monaghan but this is when the team showed their greatest hunger, determination and character. Soon after Tyrone opened up their 2 point lead, Monaghan worked their best score of the day, creating and scoring an excellent team goal. This gave them the impetus to  push on and at the end of the game run out 6 point winners on a score line of 3-06 to 0-09.

This set up a third and final appearance of the day in the final against Cavan, who came through two games against Fermanagh and Antrim respectively. After two tough games in terrible weather conditions and a two tiring squads, it would boil down to which team would show the most hunger and character to get over the line. As the weather began to worsen this led to a poor game overall but Monaghan came out the right side of a one point result, winning on a score line of 1-06 to 1-05. This meant that the squad qualified for the Buncrana Cup Finals weekend which will take place in Donegal at the beginning of August. Before that though, the squad will take  part in the Garry Reilly U16 Development Squad Tournament. This tournament is run in Oldcastle County Meath and is organised by Meath Coaching & Games Development. The team will play a minimum of three games in this tournament against Longford, Dublin and Westmeath. Depending on how they get on in these games they could then potentially qualify for the semi finals and finals of this competition. They are out against Longford this weekend in their first match in this competition and we wish the team all the best in this competition.